Actor Vishal was last seen on screens in the action thriller flick Veerame Vaagai Soodum which hit the screens under the direction of director Thu Pa Saravanan with actress Dimple Hayathi as the female lead. The entertainer opened to negative reviews from the critics and the audience. As the result, it left the theaters swiftly. The Poojai actor has put that behind him, and is now busy with his upcoming movie titled Mark Antony. Story teller Adhik Ravichandran of Trisha Illana Nayanthara fame has penned the script of Mark Antony, and is directing the entertainer. Actor S J Suryah will be essaying the antagonist part. Actress Ritu Varma will be seen in the female lead role. 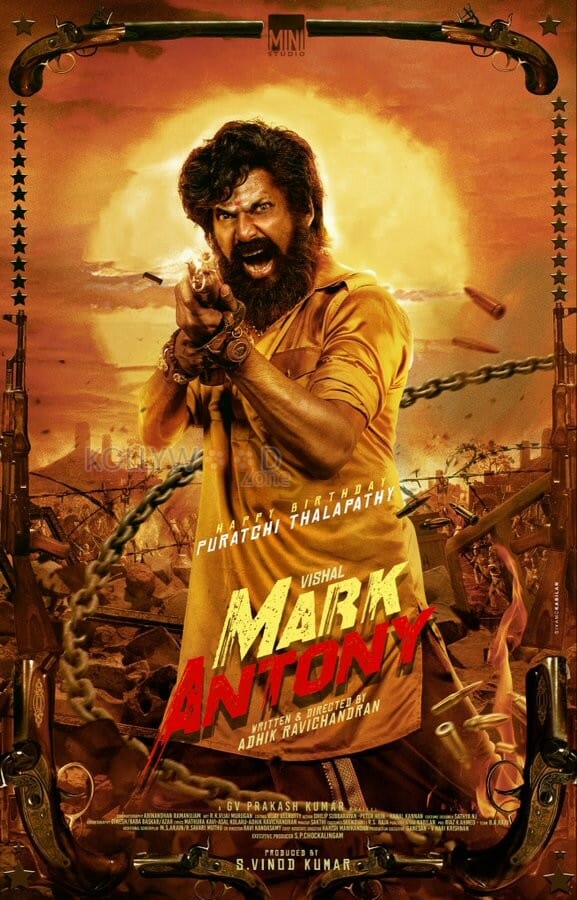 The entertainer went on floors a couple of months back, and the shooting for the flick was happening in full swing. Unfortunately, with 100 days of shoot left, actor Vishal got injured while performing a stunt sequence for the drama and was forced to convalesce. The production team announced that the shooting for the movie will resume in Chennai as and when the actor is fit to shoot. We had also reported the news. Now, the shooting for Mark Antony has resumed. It is said that the team is keen to shoot the drama in a stretch as the lapse due to Vishal’s injury has already delayed its completion.

The production team had released the first look of Mark Antony on social media a couple of months back. The first look poster had actor Vishal in a fierce and never seen before look with thick beard and a gun in hand firing in rage. The first look poster went viral, and engineered high expectations on the venture among the aficionados of the actor. There is news that the production unit is in plans to bring the flick to the theaters in the summer of next year. Mark Antony will be released in languages Tamil, Malayalam, Telugu, Kannada, and Hindi.

Besides actors Vishal, S J Suryah, and Ritu Varma, Mark Antony has veteran actor Nizhalgal Ravi and Telugu actor Sunil Verma in vital supporting roles. Music director G V Prakash Kumar will be handling the musical instruments for the flick. The cinematography department of the entertainer is taken care of by cinematographer Abinandhan Ramanujam. Editor Vijay Velukutty has been roped in to edit the movie. Master Ravi Varma has choreographed the stunt sequences of the film. The project is bankrolled by S Vinod Kumar under the production house Mini Studios LLP.

On the work front, actor Vishal who was last seen on screens in the action drama Veerame Vaagai Soodum is currently busy shooting for his next venture christened Laththi helmed by newbie storyteller A. Vinoth Kumar in which he will be seen alongside actress Sunaina, and for the sequel of Thupparivaalan under his own direction after firing director Mysskin. On the other hand, actor S J Suryah who had a last outing in Kadamaiyai Sei is currently busy shooting for his upcoming venture christened Bommai under the directorial of film maker Radha Mohan in which he will be collaborating with actress Priya Bhavani Shankar. Besides this drama, the actor has a couple of his long-delayed projects titled Uyarndha Manithan scripted by filmmaker Tamilvannan, and Iravaakaalam helmed by director Ashwin Saravanan in the shelves waiting to see the daylight.

Fans of Vijay are pumped up with release...