When actor Vishal’s name is in the title card one does not have to make effort to look up for the movie’s genre. One can go blindly with mass action and get it right nine out of ten times. His recent outing also falls in the same. The actor who was last seen in Enemy last year is back on screens with his latest drama Veeramae Vaagai Soodum. The star actor has not had a solid commercial success in a while and is heavily banking on this drama. Debutant director Thu Pa Saravanan has helmed the flick. Actress Dimple Hayathi plays the female lead. So, how has the film come out? Will it give actor Vishal the much necessary break that he is after? To know that let us get in to the movie review. 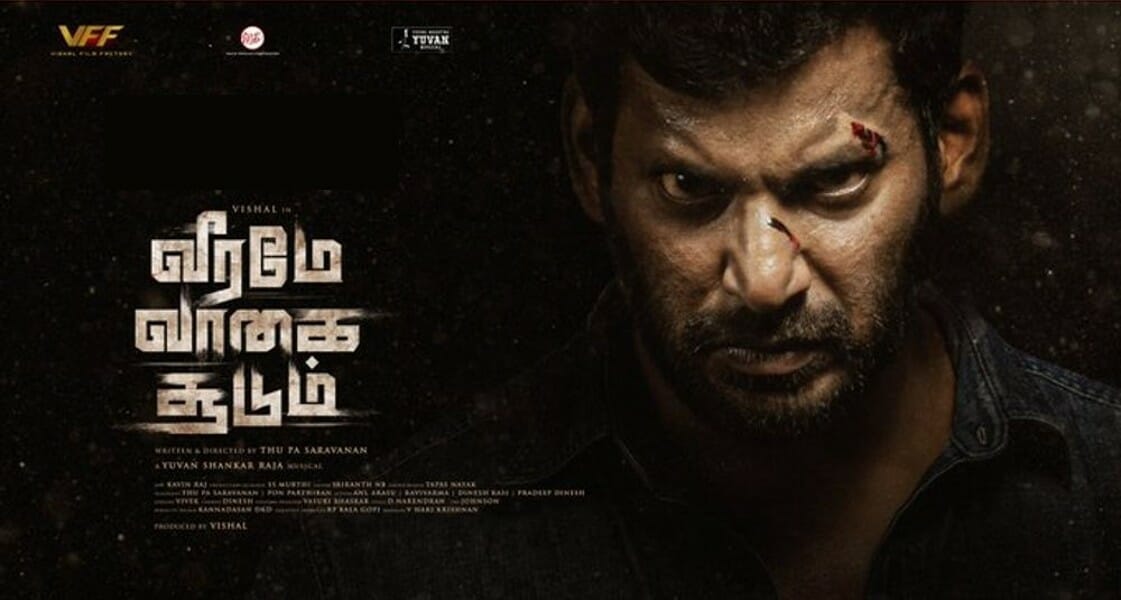 Veeramae Vaagai Soodum follows the life of a middle-class man Purushottam aka Porus (Vishal), a hot-headed vigilante with a desire to join the police department after his father (G. Marimuthu), a constable with the police force. His father is worried that his son’s aggressive nature would land him in trouble which could hamper his chances of becoming a cop. But his housewife mother (Tulasi) has high hopes on her son though he not currently doing anything seriously with life other than following the news and leisurely spending time with his friend Thalapathy (Yogi Babu). He has a teenage sister Dwaraka (Raveena Ravi) who is doing her degree. She is constantly harassed by a local ruffian. Porus is enrages. But father keeps him in check from taking the law in his hands. Meanwhile, we have Nedunchezhian (Baburaj), a bigwig politician gearing up for the upcoming parliament elections. His brother uses his influence and gets away with his filthy behavior in college. On one instance, he oversteps and get entangled in a revenge porn scandal that escalates to a police complaint.

On the other hand, there is Parisuddham (Elango Kumaravel), a social activist who is spearheading a protest, against a factory run by Nedunchezhian claiming to shut it down citing the hazardous waste disposed from it is polluting his village and causing disruption of livelihood. How can a Tamil hero be without a leading lady, right? While all these things are on the edge, Porus romances with his sweetheart Mythili (Dimple Hayathi), and deploys shady methods to get her parents to marry her to him. Everything seem to be going smoothly for him and his family, then something horrific happens. Things go out of hand. Injustice is unleashed on his family and is pushed in to a miserable state by influential men. Now, Porus must let loose his vigilante side and take on these malicious men to see justice is done by his family. What has these men done to his family, will Porus go after these men, if so, what happens to his dream job, is what makes the rest of the flick.

Director Thu Pa Saravanan seems to have written the script with having actor Vishal or some other mass hero in mind. His intention is crystal clear. To paint a larger-than-life picture to his lead actor. The one where people wait for a supreme force to come save them, and even those shouldering a fight on their own, somehow cannot manage to cross the winning line all by themselves. They are robbed of their hard work, simply so the lead hero can have his crown. For some unfathomable reasons, this type of script is the favorite to heroes of Tamil cinema. Director Thu Pa Saravanan has done his work to perfection on this note. Look at the character sketch of Porus. He is not the regular morally and socially responsible guy that we are used to. He is even superior version of it. Another problematic area is how the women in the film are written. Why are sisters of Tamil cinema habitually used as a material for hero’s revenge?

When we watch Veeramae Vaagai Soodum there is this disturbing underlying message that Porus is the man, and he is the savior of all. This is a funny message to begin with, as everything we witness in the film is just contrasting to this message. The antagonist is on a murder spree, killing everyone involved in a criminal act to tight up the loose ends so it does not lead back to him when simply he could have killed one person, the hero, and put a complete end to the matter. But that is not happening he seems to say. Porus is neither an influential person or a civil servant holding high designation, then why not him but the others? Because it is the tradition of the antagonist to get his butt kicked by the hero at the end.

If there is one positive in the drama, it is the way how story teller Thu Pa Saravanan handles the narration of the flick. He sets up three plot lines and runs it simultaneously to keep us on the hook. It helps to an extent. But the storylines are not engaging enough to hold our attention. They are just stuffed with cliches and presented with high predictability. To top it all, the loopholes and dramatization make Veeramae Vaagai Soodum a testing experience.

Actor Vishal is pulsating as usual. He sends the hooligans flying with his gravity defying action sequences. Actress Dimple Hayathi in a typical Tamil heroine role that has literally nothing to offer to the proceedings. Actress Raveena Ravi has done justice to her part. Comedian Yogi Babu does not live up to his purpose. Actor Baburaj is adequate. Actor G. Marimuthu is effective as always. The rest of the cast has delivered what was asked of him.

On the technical front, musician Yuvan Shankar Raja is yet to reach his form. His tracks are average. Even his back ground score is just passable. Cinematographer Kavin Raj’s frames add value to the film. Editor N. B. Srikanth’s scissor work emphasis the work of his colleague well.

On the whole, even after overlooking the logical loopholes of Veeramae Vaagai Soodum, it still is a testing experience for the audience.