Debutant director Chachi has borrowed the famous comedy track of comedian Goundamani from Chinna Thambi in which he had portrayed the role of a man suffering from night blindness and has crafted a story out of it. In fact actor Vaibhav mentions the veteran comedian as his grandfather and the one responsible for his night blindness. Actor Vaibhav who has the ability to turn even bad jokes in to enjoyable ones has added a great strength to the comedy entertainer which otherwise would have been a pretty tedious watch. 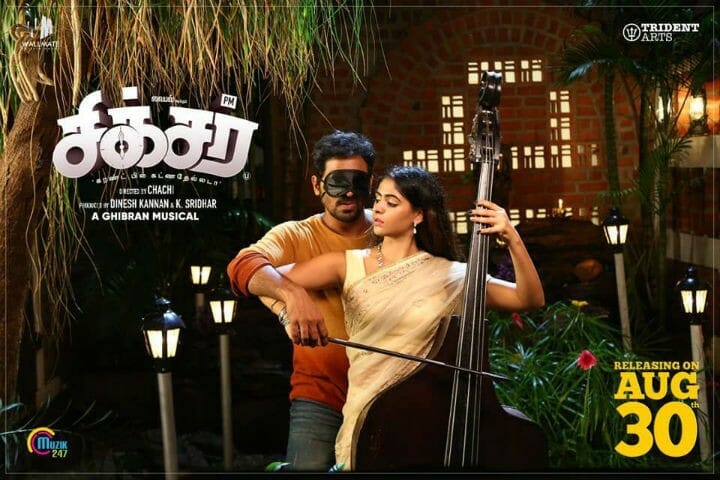 Aadhi (Vaibhav) is a civil engineer who hails from a middle class family. Besides the nyctalopia illness that he suffers from, Aadhi leads a happy life with his father (Ilavarasu) and mother (Sriranjani). The illness that he possesses begins to disrupt the normal life of Aadhi as it makes his marriage very likely as he needs support to take care of himself after 6 p. m. For his own safety Aadhi has a habit of returning home before the clock strikes 6. But unfortunately one day on his way back to home his bike causes trouble near the beach and makes it impossible for the actor to return home before the deadline. So he makes a call to his friend (Sathish) asking him to pick him up from the spot.

While he is waiting for his friend the time gets past 6 and Aadhi waits at the venue with no clue of what is happening around him. Suddenly in no time the place gets filled in with protestors who are there to protest against (Manohar) a politician and goon who is accused of sexual harassment. The politician’s con men arrive at the place to scare off the protestors who gets scattered fearing the con men. But Aadhi who has no idea about what is happening around him raises his hand casually along with humming the rebellious song ‘Tholvi Nilaiyena Ninaithaal.’ Seeing Aadhi’s action the broken sprit of the protestors gets boosted and they unite again to keep the protest going. After this, Aadhi gets in to the image of a leader who held the protest from front through the media who wrongly places him as a hero.

Krithika (Pallak Lalwani) also a reporter mistakes Aadhi as the organizer of the group and gets impressed by Aadhi’s audacity and falls for him. Aadhi taking his chance reciprocates Krithika’s love for him but hides his illness from her. Meanwhile, Aadhi’s new image of a leader does not incite a good reaction in the politician’s camp and he earns the wrath of the politician. How Aadhi manages to hide his weakness from Krithika, and how did he handle the wrath of the politician, is what makes the rest of the story.

It is not fair to expect a logical treatment from a film under this genre but when the film does not evoke laughter and fails to serve its purpose of entertaining the audience even after turning a blind side to its illogicality, then it makes the movie a tedious watch.

Actor Vaibhav has carried on from where he left in Meeyadha Maan and has delivered a casual performance with ease. Guess it is the comical time along with the hilarious expressions of the actor is what aids him to turn even an ordinary joke in to a good one. The role seems to be tailor made for the actor. Actress Pallak Lalwani is a misfit in the role of a Tamil news reporter and she struggles to lip sync as well as with her dialogue delivery. Actor Sathish turns out to be a huge disappointment yet again expect for few one liners he delivers and a couple of scenes with actor Radha Ravi. The rest of the cast including actors Ilavarasu and Radha Ravi have delivered what was asked of them.

On the technical front, cinematographer P. G. Muthiah has covered the comedy entertainer neatly while musician M. Ghibran has delivered what is necessary for the venture. Editor Jomin must have had an easy time editing the flick.

Debutant director Chachi seems to have been in the mindset of capitalizing on the idea of billing the movie as a comedy entertainer and just make people laugh their heart out in theaters. And hence he has even let the very basic logical elements in air to craft an out and out comical entertainer which he has managed to achieve to some extent. But the entertainer fails to entertain the audience as a whole.

On the whole, even the spectacular ability of actor Vaibhav could not push Sixer in to a complete entertainer zone as carefree and comfortable writing is a big drawback for the film.