Dharma Durai is a Tamil language movie which is written and directed by Seenu Ramasamy and produced by R.K. Suresh on behalf of Studio 9. The movie features Vijay Sethupathy and milky beauty Tamannah have performed in supreme roles and Aishwarya Rajesh and Srushti Dange in empowering roles. Yuvan Shankar Raja is the music director for ‘Dharma Durai’.

M. Sukumar has made the cinematography and the editing part was played by Kasi Viswanathan. Actors like Radhika Sarathkumar, Ganja Karuppu, Aruldas, Soundaraja and Madhuvanti Arun have played supporting roles and Radhika Sarathkumar have enacted as Vijay Sethupathy’s mother for ‘Dharma Durai’. Earlier the movie’s trailer which was released has received positive response from his fans. 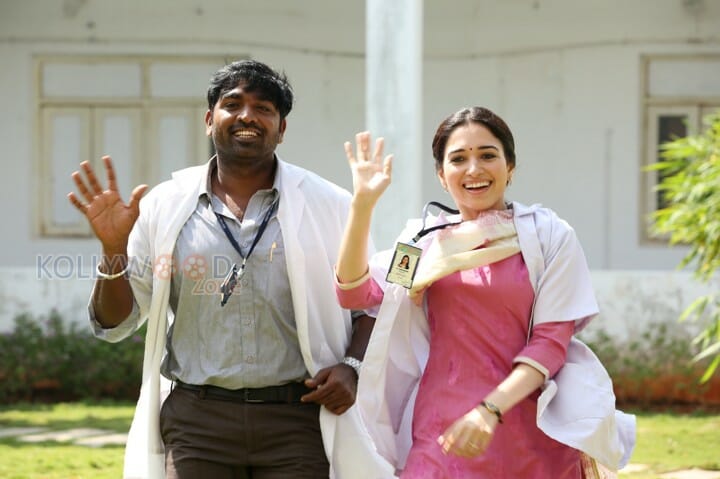 Tamannah has enacted as a homely character from a village and her costume is superb for her. The trailer which was released has earned positive accolades from many. The director has taught Tamannah the Madurai slang Tamil for her for the making and Tamannah has performed like a typical Tamilian with wearing half Saree, the traditional dress of Tamil girls.

The music director Yuvan has given his best music and the background scores is also excellent. Vijay Sethupathy has acted in his usual style of acting and will win hearts of his fans. The cinematography work made by Sukumar needs applause and the editing part is also neat and appreciatable. Radhika Sarathkumar’s mother role is amazing and her acting as Vijay Sethupathy’s mother is wonderful and her acting has shown the motherly love and care is beautiful.

Vijay Sethupathy’s fans were waiting for the movie release from long time. Tamannah has paired Vijay Sethupathy for the very first time and their chemistry has worked out well. The other heroines have done justice to their part. Watch the movie and feel the homely environment of the movie.

Overall, ‘A not to be missed’ rural drama!