Actor Vijay has delivered a Diwali delight for his aficionados consecutively for the third year with his flicks. This Diwali it is Bigil that has got the fans of the star so charged up and we have news that the shows are houseful already for the weekend. Being the third film under actor Vijay and director Atlee combo, Bigil has hit the screens amidst high expectations. And the supporters of the actor are eager to make the entertainer in to a hat trick hit. As to facilitate it, Atlee has crafted the entertainer out and out exclusively for the fans of thalapathy. The film initially takes some time to settle in the first half with taking ample of time for character establishment. It is only in the second half the film takes flight. 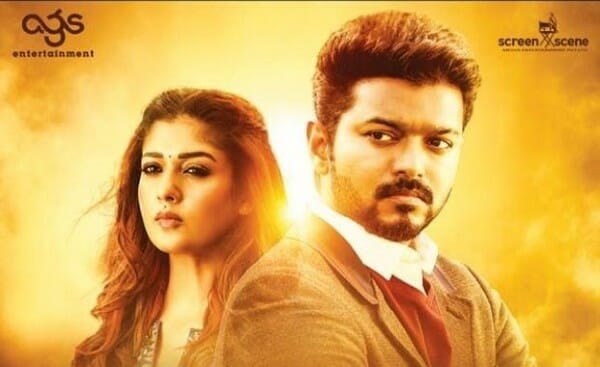 Rayappan (Vijay) is a local goon who calls the shot in his locality for his people. As most of the lead heroes of Tamil cinema, he is a believer of vigilante justice and takes up the path of violence in order to safeguard his people. He has a son named Michael Rayappan (Vijay) who is very passionate about football and is a shining star of Tamil Nadu football team. Rayappan, who calls his son as Bigil insists to him why it is important for him to succeed and how it can change the lives of the people of their locality. But unfortunately when Michael Rayappan is at the verge of becoming the captain of the Indian nation football team, he gets dropped from the team by J. K. Sharma (Jackie Shroff) the president of Indian football association, stating that his father’s background would defame the image of the Indian football team. The inopportune turn of events makes Michael Rayappan leave behind his dream career and follow the path of his father.

One day he witnesses his friend Kathir (Kathir), the coach of Tamil Nadu women’s football team being attacked by few gangsters led by Daniel Balaji. He saves Kathir from the henchmen. Kathir is already injured badly and cannot train the team with full potential. This situation demands Michael Rayappan to step in to the shoes of Kathir and coach the women’s football team. Agreeing to take up the role as the coach of Tamil Nadu’s women football team Michael Rayappan finds the team to be in low spirit and with self centered players. The players of the team see him more of a don than a coach as he has not been in the field for a long time. The methods that coach Michael Rayappan implants to bring the players together as a team, how he changes the self centered attitude of the players to win matches and how they train together to bag the all India cup going against the corrupt association is what makes the rest of the film.

The film has its moments but as it is always the case with the mass hero films of Tamil cinema the unwritten factor that the hero must be the center of attention even if it is not his scene is little difficult to cope with. But it is exactly what the fans of the stars want and Atlee has delivered that. Besides being forced in to the plot, the mass moments seems to be emphasized than other subtle and emotional moments of the film. There are some touching back stories of the players of the women team that the director has woven in to the plot but the flow of the flick makes us feel that the back stories are merely to justify the claim that the film has a message on women empowerment.

Actor Vijay is the solo show stealer here, who else can be. The actor has performed some high octane stunt sequences which will definitely be a feast to his fans. Surprisingly actress Nayanthara has nothing much to do in the flick which is totally contrast to the roles that the star has been doing in the recent years. Indhuja, Reba Monica John, Varsha Bollamma, Amritha Aiyer, Indraja Shankar, and Gayathri Reddy have given what was asked of them. The rest of the cast has given adequate performance.

On the technical front, A. R. Rahman’s music is a big strength to the flick with Singapenney getting in to you even without your knowledge. Cinematographer G. K. Vishnu deserves a special mention as his frames are colorful and detail. Editor Ruben’s work is sharp yet the flick’s running time seems to be too long.