Kaththi Sandai is an action masala movie which was written and directed by Sooraj. The movie is produced by S. Nandagopal on behalf of Madras Enterprises. The movie features Vishal, Tamannah, Jagapathy Babu, Vadivelu, Soori have acted in leading roles. The music was composed by Hip Hop Thamiza. The cinematography work was performed by Richard M. Nathan and the editing part is played by Selva RK.

Cameo Films Company has looked after the distribution work everywhere. The movie is released in around 400 theatres in the state and dubbed in Telugu and is released in theaters today. Actors like Tarun Arora, Jeyaprakash, Aarti and Soundarraja have acted in supporting roles in the movie. The music and background scores are made by Hip Hop Thamiza and the lyrics was written by Na. Muthukumar. 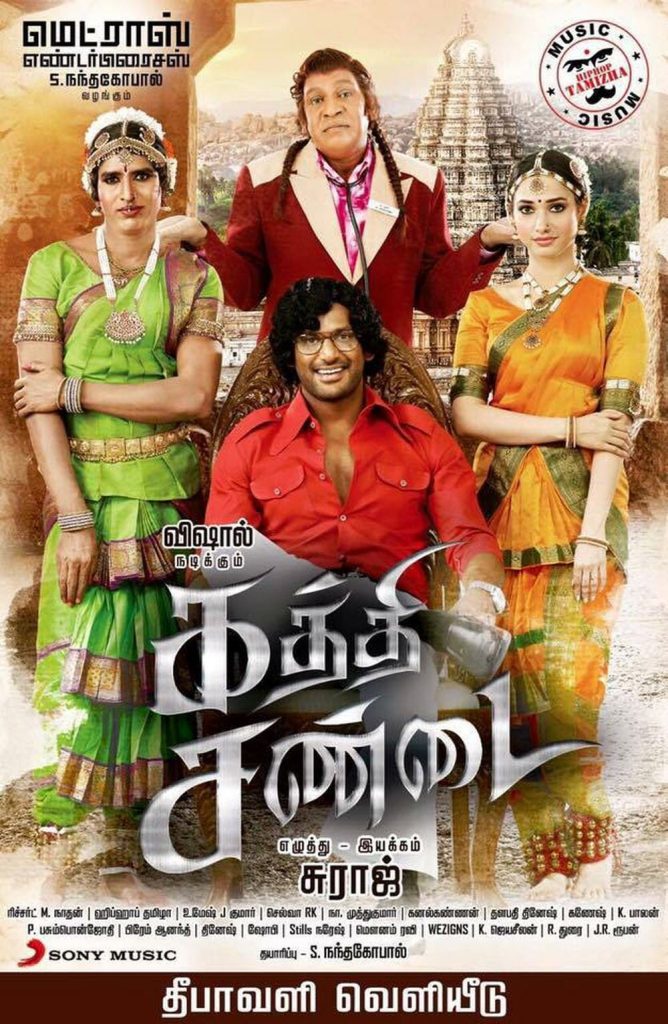 The songs which were released has captured hearts of many. Naa Konjam Karuppu Thaan song has become a hit song. Vadivelu has acted as a Psychiatrist doctor and his comedy track will make the audience filled with laughter and to lessen the stress and tension. Soori has acted in female getup and his style of acting will impress many. Vadivelu and Vishal’s combination has worked well in Thimiru.

The movie is a revenge taking story and Vishal ends the movie with a social message about corruption in politics. The cinematography work is made well and the editing part has also done aptly. Tamannah’s stylish performances will attract her fans very much. She has paired with Vishal for the very first time.

Vadivelu has made his entry after five years will definitely entertain the audience to a greater extent. Earlier the movie was planned to hit screens for Pongal and as Suriya’s S3 release date is delayed Vishal has decided to release the movie today as Christmas feast for his fans.