In the month of December last year, the serial fans of Tamilnadu were in shock and sunk in sadness by the news of popular television actress Chitra’s suicide. Even now the confusions and speculations revolving around her demise have not been put off. Amidst high emotions of her fans, the late actress Chitra starrer Calls has hit the screens nearly three months after her tragic death. So, how has the actress’s first and sadly last feature film come out? To know that let us get in to the movie review. 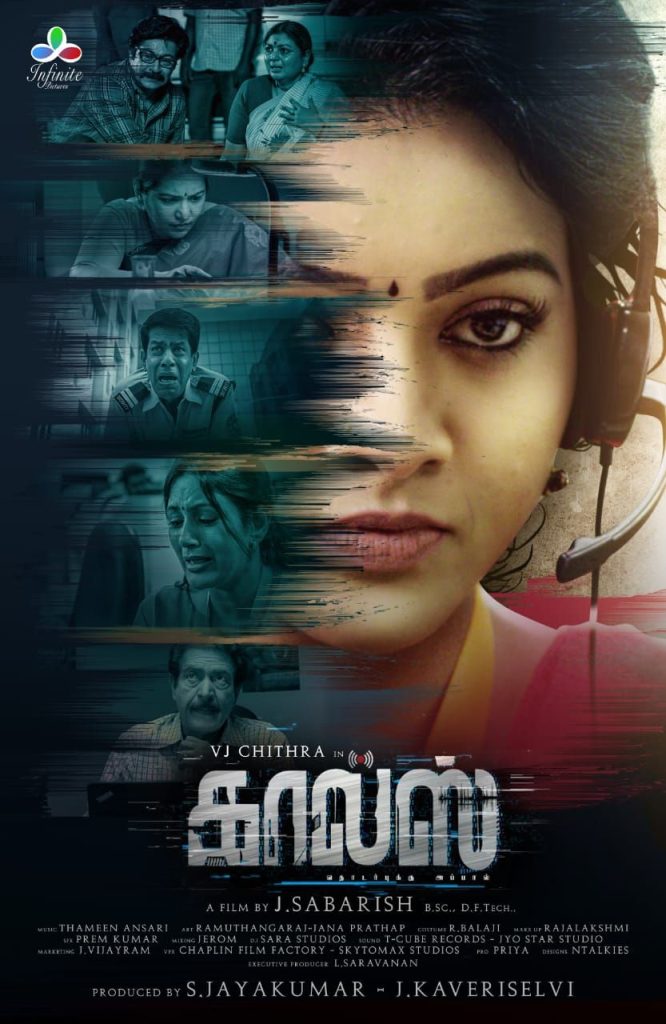 The film follows the life of a BPO employee Nandini (Chitra). Nandini is a young innocent woman living with her parents. After her father loses his job due to a small accident, she becomes the solo bread winner of the family. She works as a tele caller for a company that provides internet connection and looks after her family. Despite being a normal person there is something mysterious about her. She begins to get bizarre visions of people hurting her. This reflects badly in her job and she begins to struggle to meet her job target. On the verge of losing her job she calls every customer and attempts to convince them. But nobody seems to have the patience to listen to her. Did she lose her job, what is the mystery in her and will she be able to overcome it, is what makes the rest of the flick.

Director Sabarish wants to make Calls talk about various issues in the society like medical crime, child abuse, etc. Unfortunately his writing prowess does not support his objective. The main issue he takes up for discussion is sexual harassment. He attempts to explain the mental sufferings of a woman who is subjected to sexual harassment. To be honest, concentrating on this single issue alone would have been sufficient to build an engaging crime thriller. But film maker Sabarish is ambitious and wants to push his drama talk more on social problems. In that attempt he moves the flick aimlessly and after a point he becomes clueless as to what he wants to convey.

In the pretext of making the entertainer engaging he stuffs in lots of unnecessary sub plots and ineffective twists in to the plot. Few sub plots are not even relevant to the plot in any way. It feels like they were added only to stretch the film. This tests our patience. The comedy sequences which are meant to provide us with much necessary comical relief falls flat making it even hard to stay engaged.

Late actress Chitra has given an impressive performance in the role of a woman subjected to abuse as a child. She has been solid and carries the flick on her shoulder. Actress Sriranjani shines in the supporting role. Actors Devadarshini Chetan, and Nizhalgal Ravi have delivered a decent performance. Veteran actor Delhi Ganesh suffers due to badly written comedy track. The rest of the cast has delivered a middling performance.

On the technical front, music director Thameem Ansari’s background score helps in adding to intensify the suspense. Director Sabarish has taken care of cinematography as well as editing for the movie. Both the department is significant when making a psychological thriller flick. He could have roped in professionals to do the job or is it budget constraint issue?

On the whole, though director Sabarish’s heart is in the right place his writing and mediocre film making sinks Calls.