Debutant director Mathi Maran takes up a daring money grabbing scheme prevalent in the society on the pretext of securing a seat in reputable educational institutions, and makes a gripping thriller out of it. His choice to take up a daring subject on his debut venture is commendable.

K-town has sky high piles of message films (message padam) in its garage. But very few with something of concrete substance. Tamil cinema just loves a socially responsible film. The value of such dramas manifolds when it has a reputable name in the director’s card. Debutant director Mathi Maran, former associate of film maker Vetri Maran has helmed the film. Simply the association does bring in a level of bearing. The movie is based on the blatant money grabbing scam involved in securing seats in popular institutions in the state. Musician turned actor G. V. Prakash Kumar who was last seen on screens in the crime drama Jail is back on screens with his action thriller Selfie. Actress Varsha Bollamma has essayed the female lead role. So, how has the flick come out. Is it solid enough to propel the actor who is in a victory drought into the winning arena? To know that let us get into the movie review. 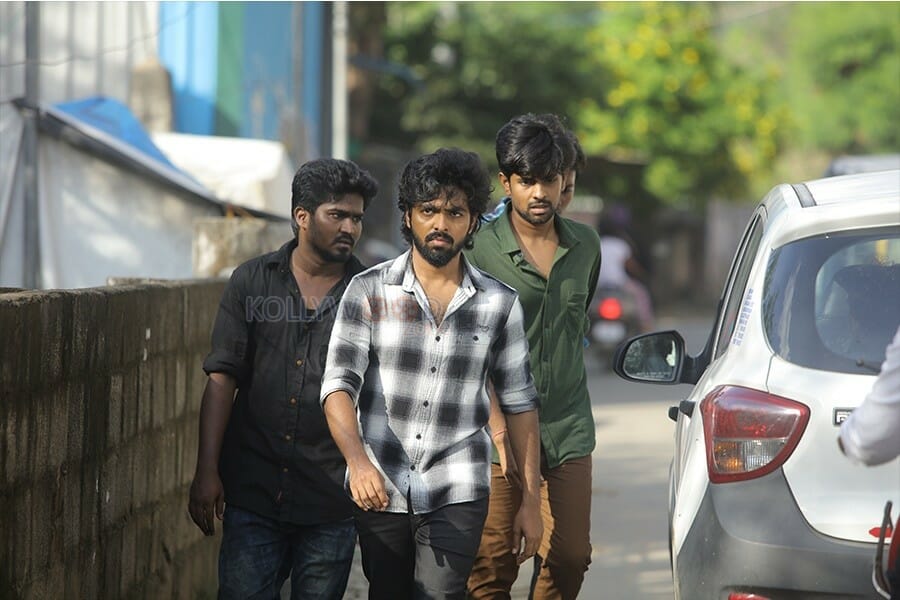 The entertainer follows the life of Kanal (G. V. Prakash Kumar), an impetuous young man from a village who secures a seat in a second-tier engineering college in Chennai. He, like most of the kids in India, is pushed into engineering for prestige by his father (Vagai Chandrasekhar). He despises him for it, and they do not have a smoothly functional relationship. After attending the college, Kanal realizes that his father has been hoodwinked into paying a hefty sum as donation for a seat in an insignificant college and gets inquisitive about how it is carried out. Upon his investigation, he finds that there is a network behind this admission scandal that is run by Ravi Varman (Gautham Vasudev Menon), a former student of his college. Kanal wants to lead a transgressive college life. He feels his dependence on his father is not going to help fund it. So, he ropes in his friend Nazir (D. G. Gunanidhi) and together they start their own admission racket to make some easy money.

Big opportunity presents, when a relative of a friend seeks Kanal for securing a seat in a prestigious medical college. Taking up the challenge, Kanal tries to overplay his hand to become a big player in the game. He uses Ravi Varman’s name and presents himself as his associate to block the seat. But things get messier when the client changes his mind and withdraws from the scheme. He demands his money back. But Nazir has other plans and refuses to refund. Infuriated with them, the client seeks the help of Ravi Varman. When he comes to know of such a play, he sets things in motion to take down Kanal. Henchmen and money lenders come in to the picture and begin to harass the family members of Kanal and his friends. Will Kanal be able to resolve the situation, and save his friends and their family, is what makes the rest of the flick.

Debutant director Mathi Maran takes up a daring money grabbing scheme prevalent in the society on the pretext of securing a seat in reputable educational institutions, and makes a gripping thriller out of it. His choice to take up a daring subject on his debut venture is commendable. Majority of message films have failed because of the director’s notion that speaking out against a sensational crime is enough in itself to get the audience on board to watch it. And they do not put in the necessary effort into crafting. Since storyteller Mathi Maran comes from a unique school of thought, he seems to be clear that intent does not make an impression without craft. Selfie has genuine effort behind everything that it is made of. From scripting to its technical facet.

Director Mathi Maran seems to possess the rare skill among Tamil film makers. He knows how to wield his pen. His dialogues are razor sharp and are not hesitant to draw blood. Despite attempts to mute its voice. On the negative note, the film’s emotional side does not appeal and perhaps feels a little overdone. Where Selfie takes a colossal hit is where it tries to solve a corruption that is perpetrated with systemic backing with a utopian solution. Nonetheless, there is enough substance in Selfie to overlook the flaws it enfolds. In the end, we would not regret doing so.

Actor G. V. Prakash Kumar is fitting as a hotheaded youngster. But the actor is repetitive with his performance. We get a little tired witnessing the same expressions film after film. Actor Gautham Vasudev Menon is impactful. His cold and chic attitude lifts the character to a whole different level. Actress Varsha Bollamma does not have much to offer to the proceedings. However, it is not a filler role either. She has lived up to her part. Actress Vidya Pradeep has done justice to her role. Veteran actor Vagai Chandrasekhar makes his presence felt. Actor Sangili Murugan is as effective as usual. Comedian Thangadurai is adequate. The rest of the cast has delivered what was asked of them.

On the technical front, G. V. Prakash Kumar as a musician is clearly not at his best. His songs are okayish. Even his background score is inconsistent. Cinematographer Vishnu Rangasamy’s frames are adequate for the film. Editor S. Elayaraja has done a fine job trimming the entertainer.

On the whole, with Selfie debutant film maker Mathi Maran has made his master proud and in process registering a clear message that he is going to walk down on the very path that his master is paving in Tamil cinema.