After appearing in couple of flicks like Madras and Vada Chennai actor Pavel Navageethan has turned film maker with his debut investigative crime thriller V1 Murder case. The most vital challenge in cooking up a brain teasing investigative crime thriller lies in the way the film lays out few hints, different narratives of incidents occurred during the time of murder, rational explanations of why things proceeded the way they did and a taut screenplay. Interesting characteristics of the individual working on solving the case would be an additional plus. V1 Murder case managed to bring in all these elements in its plot except rooting its certain actions on rational grounds at the most crucial phases of the movie. And that has put the entertainer in ‘just another thriller of Tamil cinema’ category. 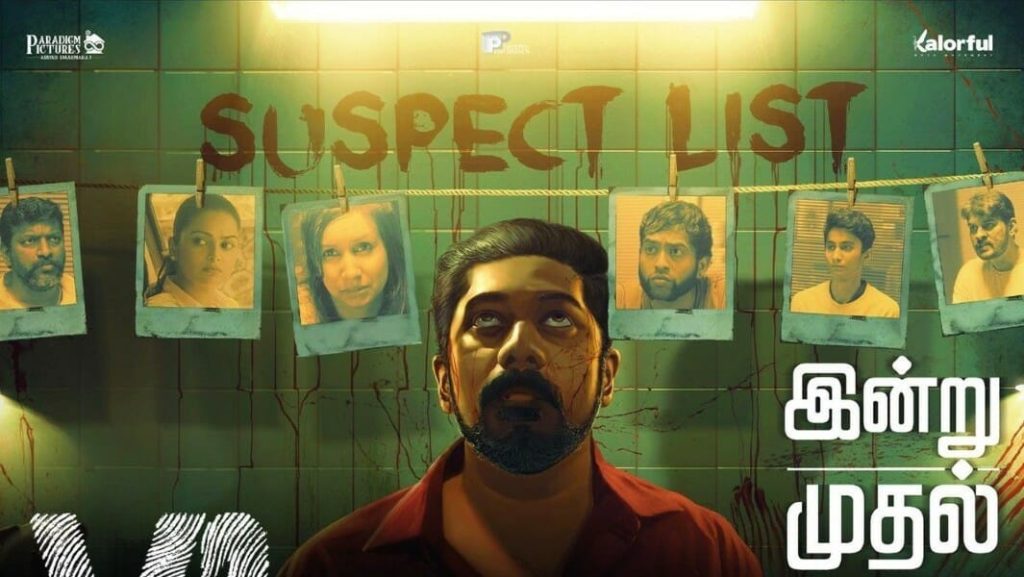 Agni (Ram Arun Castro) is a troubled man who works as a forensic science trainer. He was a cop before but had to quit his on field officer job due to a peculiar phobia known as nyctophobia, that he is possessed with. The phobia begins its play whenever he gets subjected to darkness. The darker it gets, the more Agni becomes anxious and goes close to passing out. The shock from the accidental death of his wife happened few years ago had bestowed him this tragic disease which eventually put him in the forensic section. Meanwhile, a woman named Narmada (Gayathri) who was in a live in relationship with Inba (Lijeesh) is murdered.

This case is handed over to Luna (Vishnu Priya Pillai) who is on a desperate mission to bring Agni back to the force. While she begins to suspect Gayathri’s partner, not able to cope up with the loss of his loved one he commits suicide. The forensic duty of the case lands on Agni’s lap. He just finishes his part in the case and does everything he could to keep himself away from it. Like the saying goes a cop can never be kept away from their innate ability to keep whiffing for evidence in crime, Agni gets down along with Narmada to solve the murder. But he does so only after a bizarre event which leads to his enlightenment. They begin their investigation by probing people close to the victim. They come up with a list of potential suspects out of which almost everyone gets eliminated by evidence.

Agni goes after one of the narrowed down suspect who traps him inside a building. When darkness begins to ensue Agni’s condition worsens. With the flick’s lead character in jeopardy we get in to the interval block. Things cut loose and take a rapid flow in the second half as the suspect whom Agni was after gets caught effortlessly. And to everyone’s surprise Agni gets out of his phobia quite simply and involves himself actively in the case. The factor – how could a person with fear for darkness go after a killer that indisputably requires field work at night – which put us in a curious mode disappears in a blink of an eye and so is the rational grounds of the flick. The way Agni and Luna solve the murder is what makes the rest of the flick.

The director with a peculiar murder puzzle along with his interesting characterization of his lead character gets the attention of the audience from the word go and manages to hold their attention till the first half of the film. But he decides to go out of zone a little bit in the latter half and it is where he has involved in lazy writing. He shifts the narrative and his characters as he desires from the very ground he set. The investigative portions particularly where the lead characters interrogate the suspects are not well written and looks simply staged just to put Agni in an expect image. It is done so by degrading Luna’s ability to sense. Also, the justification that he tries to provide towards the end seems literally forced.

Actors Ram Arun Castro and Vishnu Priya Pillai are adequate in their performances but experienced actors would have added more strength to the drama. The rest of the cast has delivered what was asked of them.

On the technical front, while musician Ronnie Raphel has added strength to the flick with his background score. Cinematographer T. S. Krishna Sekhar frames’ has just filmed the visuals plainly with no life. Perhaps, decent Cinematography and star cast could have helped a bit in upping the standards of the entertainer.

Director Pavel Navageethan took on a new element to craft his plot with interesting ideas and set his potential flow right. But he himself has defied the very own flow that he set which has resulted in him ending up making a pretty ordinary investigative thriller. For instance, the director’s decision to go without songs, the much necessary commercial element of Tamil cinema should have helped in speeding up the narrative but contrastingly he fills up unnecessary scenes to kill the time he saved. Film makers of Tamil cinema must allow themselves to leave the film as such to its natural flow irrespective of the length of the film if forced addition or deletion of scenes to lengthen or shorten the flick would affect its essence.

On the whole, V1 Murder case is a film with interesting elements which the story teller himself has snubbed with his careless work.