Udhayanidhi Stalin has made a complete change over for his new project ‘Gethu’. He has changed his look over and body language for this movie. The movie is highly expected for this Pongal. He himself funded the project under his home banner Red Giant Movies. ‘Maan Karate’ fame Thirukumaran has directed the project. Amy Jackson is doing the female lead role. Vikranth is doing role of a paid assassin. Harris Jayaraj scored tunes. The movie also features Sathyaraj, Karunakaran and some debutante actors. 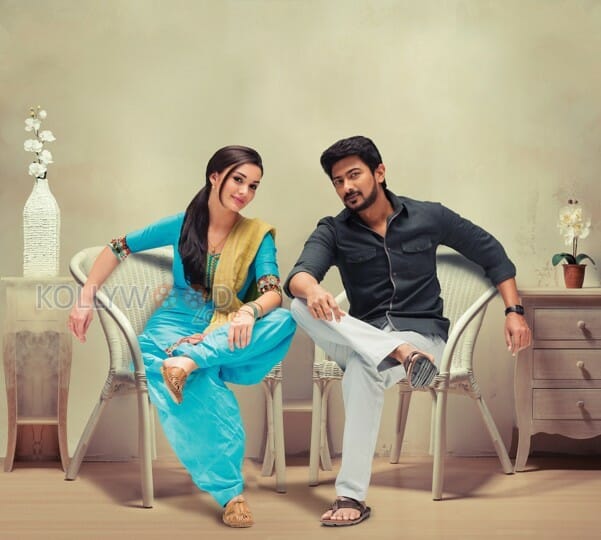 The movie seems to be directly lifted from few Korean movies. But still the movie has some positives. There are lots of tense moments. There are good characters, and there are terrible characters. By terrible, we mean Amy Jackson literally. We are not going spoil anything in this review. There are no violence and gory action scenes. But it is one of the intense action movies. The characters are well crafted. Vikranth as an assassin has done role of his life time.

Sathyaraj is absolutely flawless. This brilliant crime drama doesn’t only provide the audience with tons of great action, but with powerful themes of friendship, love and emotions. The creativity of some of the action and non action scenes are to be admired, its nothing but a master piece. Thirukumaran tries to demonstrate his utter mastery of action drama. The cinematography is also something to admire from this movie. The locales of Kodaikanal are shown as if they are in United states of America.

Amy as a desi girl is what troubles everyone of us. Why Amy? We heard that she was replaced by Kajal. The makers should have stayed with Kajal itself. Harris Jayaraj’s music is catchy. Thillu Mullu song is easily the pick of the album. Editing is crisp and solid. What else? No flaws in other technical department

Overall, Gethu is a welcome note for Udhayanidhi!