Vijay Sethupathi is and has been one of the busiest actors in Tamil cinema industry ever since his debut. Even covid could not limit the rate in which he does his films. The actor who had had two releases earlier this month has one more in the likes of Annabelle Sethupathi. Actress Taapsee Pannu plays the female lead. Debutant film maker Deepak Sundarrajan aims to open his score in the k-town with a genre that is fading away, after having ruled the industry for over a decade. The star actor has not had a solid commercial success for a while now. Will the horror comedy put him back on the winning track? To know that let us get in to the movie review. 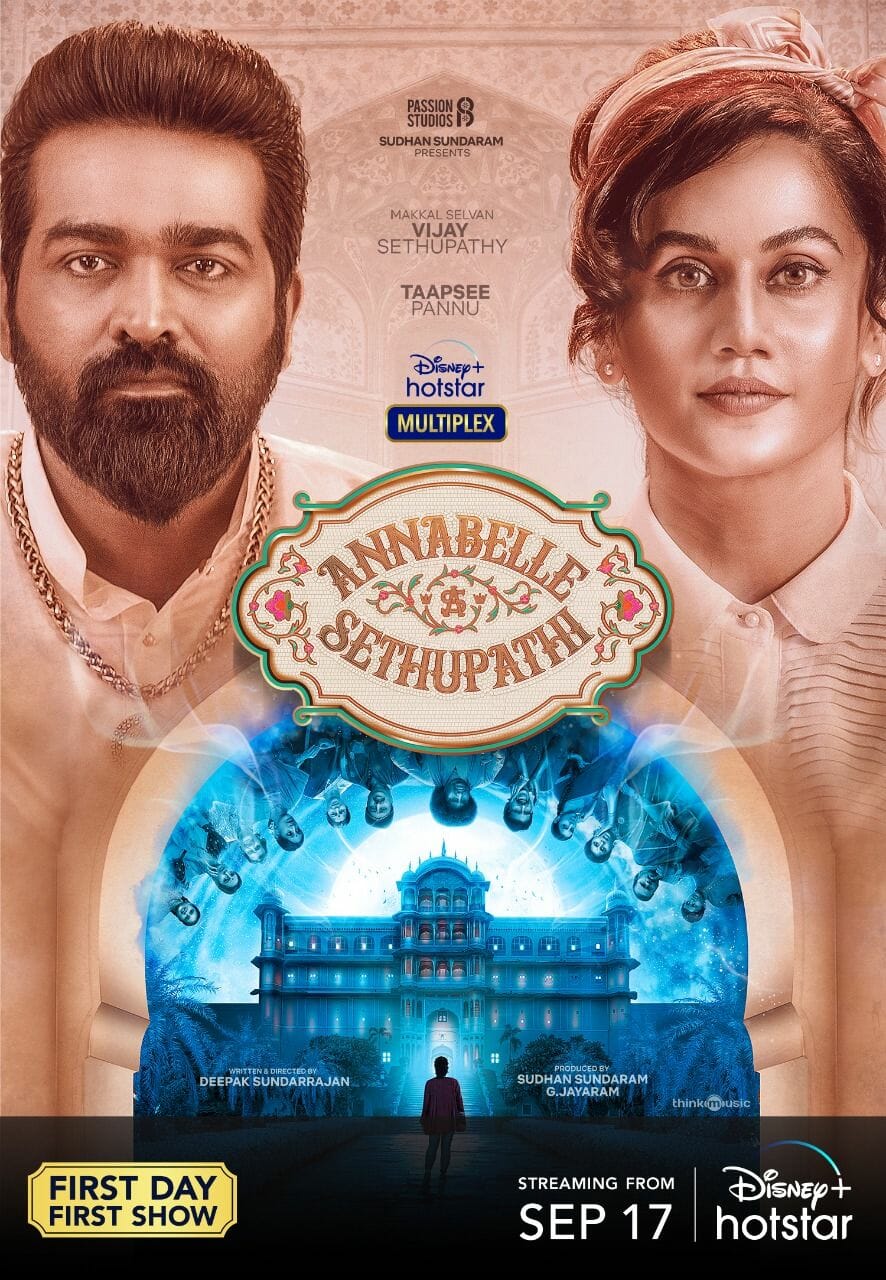 The film follows the events that take place inside an ancient palace. The palace is owned by a family for generations. In 2021, the present heir (Linga) of the family, who is a local cop, has inherited the palace from his grandfather (Suresh Chandra Menon). There is a mystery around the palace. People who enter the palace during a full moon day and dine at the palace never make it out. The ghost of the family’s ancestor Kathiresan (Jagapathi Babu), from many generations ago inhibit the palace along with few other spirits. They are actually ensnared inside and cannot leave it due to a curse bestowed on them. The cop who has the palace to his name now, wish to turn the place in to a financial source. But the speculations about presence of ghosts stand as a great hinderance to his plan. So, he comes up with an idea to negate the ghost theories revolving around the palace.

He decides to lodge a con woman named Rudra (Taapsee Pannu) and her family (Rajendra Prasad, Raadhika Sarathkumar) inside the palace for few days. The family settles in. Rudra dines on a full moon day. Surprisingly, nothing happens to her. Then we are presented with a flashback to get a picture of what had happened in the palace. Fast rewind backward, we see king Veera Sethupathi (Vijay Sethupathi) who is head over heels in love with his wife Annabelle (Taapsee Pannu). He decides to build a one-of-a-kind palace for her. He ropes in masons from all over the world who are best in their trade. The palace is built, but is attracts unnecessary attention leading to the death of the king and his family. What are the events that lead to the death of the king and his family, and how come Rudra is safe inside the palace or is she, is what makes the rest of the flick.

Director Deepak Sundarrajan has built his script in a plain and simple tone. But just like rest of the horror flicks that we have had in the past, it has a condition. It demands us to suspend ourselves from looking for logic. If we bring ourselves to comply with that condition, Annabelle Sethupathi entertains us to an extent. In the first half, the events that transpire after Rudra and family get in to the palace are amusing. What is interesting in Annabelle Sethupathi is the way how simple situations are built so effectively so that it creates space for comedies to work well.

Given the number of artists, with a proven track record to perform comedies, on board, Annabelle Sethupathi should have offered more in terms of comedy. Disappointingly it does not. The plot does not move much in the first half. It is all about trying to make the audience laugh in the first half, while the second half deviates towards a more serious tone. Annabelle Sethupathi has our attention as long as its focus was on the comedy. The moment it inclines in to the horror arena and asks us to take it seriously, it plummets.

Actor Vijay Sethupathi is natural as usual and cakewalks his character. Even when he portrays the role of a king, there is the Vijay Sethupathi-esque aura in it. He comes in to frame only at the mid film and from their it is his show. Actress Taapsee Pannu has bagged a meaty role in the flick. Though not the best performance, she manages to stay afloat. Veteran actor Jagapathi Babu impress with his performance. Perhaps, the actor should pick roles with more weightage rather than essaying the role of an unnecessarily loud antagonist film after film. Comedian Yogi Babu shines with his timing and dialogue delivery. Actors Rajendra Prasad, Raadhika Sarathkumar, Jangiri Madhumitha, Devadarshini, and Surekha Vani have played their part well. The rest of the cast has delivered what was asked of them.

On the technical front, music director Krishna Kishor’s songs do not inspire but his background score helps in elevating the mood of the scenes, be it horror or comedy. Cinematographer Goutham George adds value to the film with his wonderful coverage. His colleague editor Pradeep E Ragav has complemented his work well with his sharp trims.

On the whole, if you ditch your pursuit for logic, Annabelle Sethupathi is entertaining to an extent. But could have been solid with a tighter screenplay. But it does not matter now, does it?