Vellai Viji (Santhanam) is a simple and happy auto driver who is known for his sarcastic antics in his neighborhood and the issues starts for him, when he falls in love with a doctor Maya (Shritha). Maya’s dad, Garuda Raja Bhattathri (Bipin) is a popular black magician in Kerala and he utilizes spirits to frighten, attack and chase away any guy who proposes love to his daughter Maya. Vellai Viji seeks the help of Chakramadevi (Urvashi) to stop the plans of Garuda Raja Bhattathri and wins his support, but a twist awaits him. The multiple hilarious and horrifying situations Vellai Viji faces, and was he able to solve the problems posed by the evil spirits, or did he fall prey to the spirits is the story line of ‘Dhilluku Dhuddu 2’. 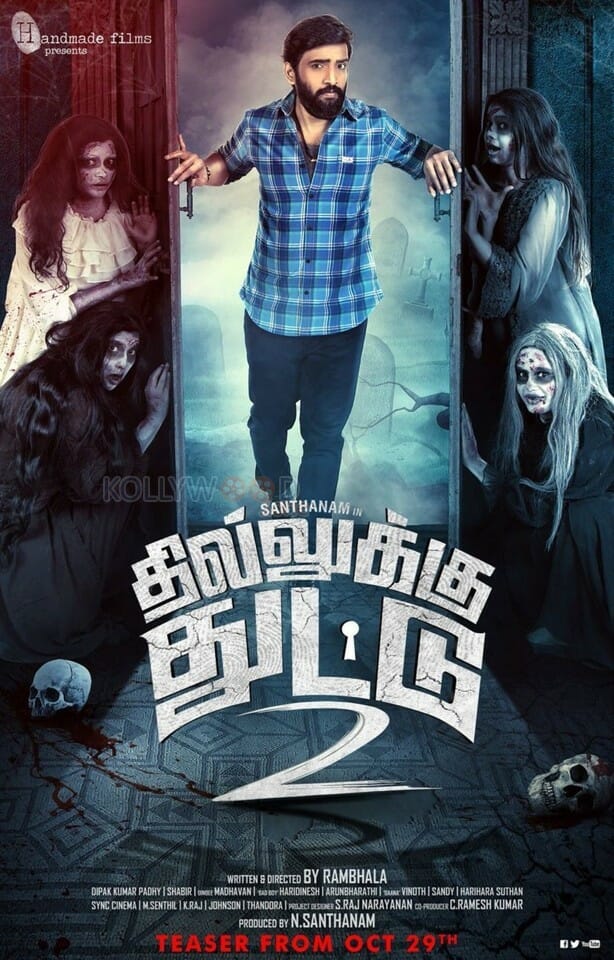 Santhanam is spirited and proves once again that he is the master of counters, and brutally trolls all the characters, including the spirits, providing a fun experience for the fans. Debutante actress Shritha doesn’t have much chance to act, but is perfect for the damsel in distress role. Urvashi, Bipin, and Motta Rajendran induce laughs in every scene and the movie is totally entertaining tickling the funny bones of the audiences. The rest of the film cast like Karthik and Shiva Shankar has done their role well.

The first half of the film showcases the comedy nature of Vellai Raja and moves at a decent pace, but the two songs don’t appeal. There are plenty of funny moments with Santhanam and his first meeting with Bipin is a charm.

The second half of the film has a twist, and the absence of songs is a huge plus for the movie. The second part is completely based on a single location, so there’s no deviation from the core story line. Though the scenes are rushed towards the climax, the film is surely an entertaining one.

The background music by Shabir suits the film’s theme, but the songs are not entertaining. The glory and hilarious sequences in the haunted bungalow is captured fantastically by the cinematographer Deepak Kumar Pathy. The funny encounters between the hero and the evil spirits are shot perfectly. The editor Madhavan Madhu had made sure that there’s no single dull moment in the movie.

Santhanam and Director Rambhala’s funny punches and quick counters had created magic in the first part of ‘Dhilluku Dhuddu’ and this time also, they have come up with a story, that provides even more entertainment. Though the plot of the film is clichéd, the director has taken great efforts to make this film a hit with outstanding comedy sequences.

On the whole, ‘Dhilluku Dhuddu 2’ is definitely worth the money spent and do watch the film with your entire clan.