G.V. Prakash Kumar’s 100 % Kadhal, the official Tamil remake of super hit Telugu movie 100 percent love turns out to be a 100 % more tedious than the Telugu version of it. Unlike the Tamil version, the Telugu version of the film which had actors Naga Chaitanya and Tamanna Bhatia in the lead role worked to an extent in spite of its dim elements because of the comical and enjoyable commercial elements. But 100 % Kadhal seems to focus only on actress Shalini Pandey’s navel rather than anything else in the film. 100 % Kadhal not only annoys the audience but also questions actor G. V. Prakash Kumar’s raison d’être to star in the blank entertainer. One finds it even harder than rocket science to figure out the intention of director M. M. Chandramouli to remake the flick after nearly a decade.

The film opens with gloomy Balu Mahendra (G. V. Prakash Kumar) walking in to a bar dressed up in wedding attire and ordering himself a drink. Looking at this the bartender asks him the reason for his sadness. Then the scene cuts to a flashback where we get to know Balu Mahendra as a self proclaimed genius and a topper in his studies. Balu Mahendra’s life is derailed when his cousin Mahalakshmi (Shalini Pandey) comes to Chennai from a village and joins his collage. They both stay together as Balu Mahendra’s father takes care of Mahalakshmi’s expenses as well. 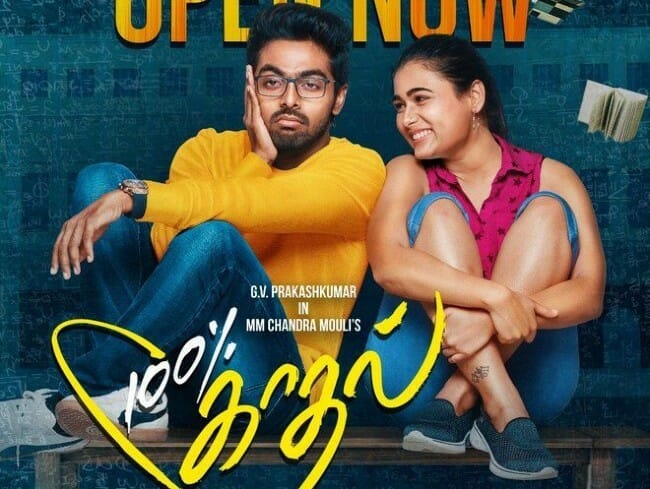 Mahalakshmi finds Balu Mahendra attractive and demonstrate cipher of love for him. Balu Mahendra who also falls for her charm shuts her down initially but the eventuality happens. Mahalakshmi is weak to the core and finds it difficult to settle with her academics. Weak to the extent that she answers 2*2 is 5. She seeks the help of Balu but he insults her by stating a woman does not require education. But later aids her to become the topper of the college. Elevating someone who answers 2*2 is 5 to the topper level of an engineering college is a feat that can only be accomplished by Tamil cinema heroes. We strictly advise against trying these sorts of highly intellectual measures in your daily life.

When Mahalakshmi tops the college, Balu does not feel good about it and his jealously jeopardize their relationship. Things get further worse when a third person Ajay outdoes both Mahalakshmi and Balu Mahendra to the top. But this also brings them together to hatch a plan to push Ajay behind, a plan that you will have to watch for yourself to better understand this trend setting love story of Tamil cinema. But when Mahalakshmi begins to speak good about Ajay, Balu Mahendra’s ego comes in to play which escalates in to a family dispute and pushes Mahalakshmi to vacate the house.

The couple meets few months later where they are put in as mature professionals. Their families are making plans to get them married and the duo travel together in order to invite their grandfather for their wedding. But the journey seems only to make space for an item number to be placed oddly. They return to Chennai to face a mammoth task of retrieving a software company from bankruptcy. Yes, they join hands to achieve the herculean task and succeed in doing so while realizing the love they have for each other in the process. Did they end up together is what makes the rest of the film.

There are many instances with recent Tamil cinema when you walk out of a theater wondering what would have been the intention of the film maker to have delivered such a film. 100 % Kadhal falls in that category without any qualm. Right from the start to the end the inane scenes that are stuffed together to develop a plot makes it unbearable to sit through the drama. It is surprising to know that still some film makers actually believe that a film can be crafted by totally eliminating rational thinking and having a close up at the navel of heroine can lure audience in to theaters.

V. Prakash Kumar’s performance is not the one to be criticized here but it is his choice of film. What is it with Shalini Pandey and abusive lead characters? Does the actress hand pick characters that are abusive and misogynist or is it just happening for her at the moment? It is so disheartening to see such a talent like actor Nassar in a mannequin role.

When the film hits the end card you get in to the blissful state with the realization that the assault on your intelligence is finally over and your redemption has finally come.

On the whole, 100 % Kadhal is a film for which you can book tickets for, if you are deviously planning to torment someone for the weekend.