In recent years story tellers in Tamil cinema industry seems to be in an indissoluble love affair with the horror genre. Even film makers who are known for mass action entertainers have sailed towards the supernatural mass action genre; such is the impact the horror genre has had on the directors of Tamil cinema. Aruvam is the latest flick to hit the theaters under the supernatural mass action genre. Actor Siddharth who is back on screens after his family drama Sivappu Manjal Pachai looks good and has given a neat performance in the entertainer. Director Sai Sekhar has made his debut with this movie in Kollywood. The teaser of the flick promised to comprise all necessary elements that a commercial drama prerequisites. But sadly the film falls short of keeping up to what it promised with its teaser. 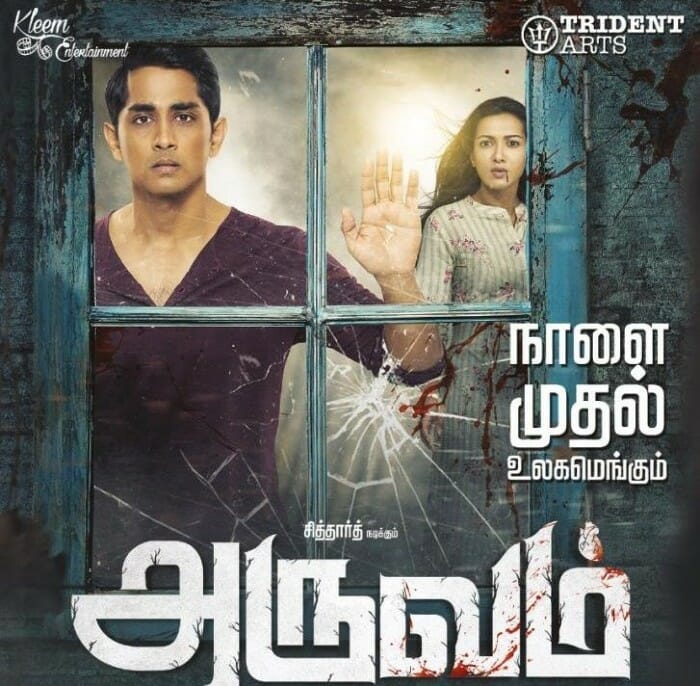 Jagannathan alias Jagan (Siddharth) is an orphan and honest food safety officer who bravely takes on crooked men in the food business who indulge in food adulteration just to boost their profit margin. He comes across Jyothy (Catherine Tresa) a school teacher who is very soft natured to the extent that she would not even harm an ant with her knowledge. Jagan is smitten by this nature of Jyothy. Director Sai Sekhar has placed a handful of template empathy scenes that the Tamil cinema audience are tired of to present the soft natured personality of his heroine. The character does it all from not harming ants, to feeding senior citizens, to freeing a parrot of an astrologer, to burying a dead dog to prove her soft nature. Later we get to know that Jyothy suffers from a medical condition called anosmia, inability to perceive odor.

Jyothy avoids Jagan as an awful incident that happened in her past life haunts her and keeps her away from leading a normal life. Meanwhile, we get to see villain Kabir Duhan Singh and his men who are after Jyothy’s life. Then we learn that Jyothy is already connected to Jagan with a back story. Suddenly there is a ghost seeking revenge in the romantic story and from there the film inclines to a mass action ghost revenge saga. Why Jyothy keeps avoiding Jagan, who is the ghost and why is the ghost seeking revenge, is what makes the rest of the story.

The plot of the film seems to be on the formulaic mass action template with comedy, love, action, and horror in papers. But amateurish scene development and execution along with predictable and insincere writing has let down the flick. Also, the film attempts to be many things, one moment it wants to be a social drama with social commentary like ‘Cancer is not a disease anymore, it has become a business,’ the next moment it turns in to a horror flick, and in the next it enters in to the mass action hero film not allowing the audience to root for the characters. Perhaps, developing a plot with a single agenda would have made the entertainer neat and much better.

Actor Siddharth looks good in the righteous food safety officer role and fights hard to save the sinking ship but the writing shatters his efforts as it is not just weak but weaker. Also, having him in the nearly similar character to the one in his last month release Sivappu Manjal Pachai does not help either. Actress Catherine Tresa for the first time in her career has landed in a meaty role but struggles to live up to it and has put on a below average performance. Actor Sathish does provide comical relief but to a limited extent. Menacing baddie Kabir Duhan Singh like all his Tamil films has not been used to his full potential and just fills in the role of a villain. The rest of the cast of the flick has deliver what was asked of them.

On the technical front, musician Thaman’s background score has added strength to the film but when it comes to the songs department not even a single number would make it to the playlist of music lovers. Stunt Silva has choreographed some good action sequences which are beautifully covered by cinematographer N. K. Ekambaram’s camera.

Looks like director Sai Sekhar has had a dilemma whether to keep the script as an out and out social drama or to dilute it with commercial elements and turn it in to a commercial mass entertainer. In the bewilderment he ends up adding not only unnecessary mass elements but out of the blue decides to bring in horror elements as well. The illogicality in these elements have totally muddled up the script which otherwise could have been a better entertainer with a very relevant social message at the right time.

On the whole, Aruvam tries to be a social, horror, romance and mass action entertainer but simply ends up being none of them.