Comedian Yogi Babu had a wonderful back to back last outing with Jackpot and Comali but the hero Yogi Babu seems to be suffering to bear an entire flick on his shoulders and has taken commercial pitfall with his flick Gurkha and is expected to take another with the recently released horror comedy Zombie. The soon the actor realize the importance of filtering out projects and putting in some extra efforts for his lead roles, the better it is for the hero Yogi Babu. Director Bhuvan Nullan seems to have casually put many chunks of tasteless and maddening comedy sequences together to cook a larger picture which is not only mind numbing to sit through but also challenges our sanity. Zombie looks like a film which is crafted without any proper pre production paper works. 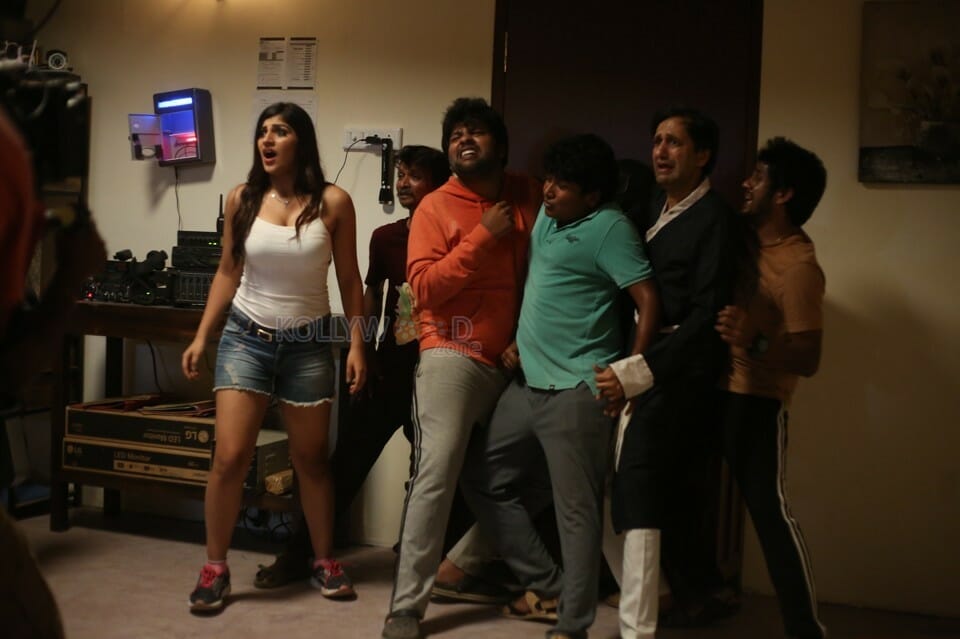 Right from its start the film merely runs on inanity and nothing else. Even when you borrow false hope that the venture will get better as it proceeds, it does not help. The lead characters get a mass intro with Vikram Veda background score. A group of men go to a resort to sort out a serious problem that they are facing in life and the problem seems to be their wives and girlfriends. Seriously? If you feel stunned right here, it is just a beginning of all absurdities that it has in its sleeves. They discuss this awfully over a beer. Suddenly, a zombie outbreak happens and now they have to deal with this. More than will they survive this catastrophic event and come out alive from the resort, our minds lingers to think will we make it alive out of the theaters. Such is the effect that Yogi Babu’s Zombie leaves in you.

Nothing, not even a single moment in the flick genuinely incites laughter in the audience. To sample it, take for instance what we get in the pretext of comedy, for director Bhuvan Nullan Andrea Saapaadu sounds like the mispronunciation of Android Software, and ice phone sounds like iphone, and PUBG sounds like Bhajji. Remind you these are the best comedies that we are talking about in the entertainer. Absolutely, nothing seems to be done right in the film from casting department to the technical unit involved in the project. What is actually funny about the entertainer is that people who already have a fan following as comedians have no clue to what they are doing in the film and have delivered a below par performance and their helplessness actually makes us laugh, no offense, just facts.

Zombie appears to be as if a group of people assembled daily on sets and shot some random portions that came to their mind on that instant and put it together and made a film out of it. Director Bhuvan Nullan seems to be more dependent on Yashika Aannand’s cleavage and slow motion shots than his own script. His idea to cash in on with Yashika Aannand’s cleavage slow motion shots, some crass adult jokes, and the popularity of individuals who recently were trending on online have ended up in a mammoth scale of disaster. Even more deplorable fact is that someone has actually agreed to bankroll the project even after hearing it out. It is high time that the minimalistic producers in the industry realize that to propel Tamil cinema in to a wider market it is the content of a cinema that they should depend on and not the popularity of the artists in it.

Finally, when you are out of the theaters after watching Zombie you think nothing can be as awful as sitting through the movie but then when you sit to draft the review for the film you realize it is more miserable than watching it.

On the whole, Zombie is simply an entertainer you could choose to miss this weekend and spend it peacefully even doing nothing. Simply Beware of Zombie.