Director Mohan G presents his film as a film the wants to depict how teenagers are lured in to the drug trade and how they ruin their life by the usage of drugs. But in the running time of two and a half hours we do not get much of that angle. It seems like it is just a guise for what the film maker actually intends to deliver.

We have been dealing with Tamil cinema directors being at refusal mode to make films on new plotlines for decades. Now along with it, it seems we will be confronted with individuals who wants to sell their warped ideas to masses through the visual medium. There is a serious problem on rise in Tamil cinema that needs to be confined and dismantled. Interfering in a creator’s freedom is unacceptable. But what would you do when a film blatantly tries to infuse hatred and cause rift among two communities or religious sect in the society? When it is a threat to progressive evolution? It simply forces our hands and puts our moral responsibility to test. Hence, to voice against it and curtail the exploitation of creator’s freedom in such devious ways becomes absolutely necessary. Film maker Mohan G turns in to Mohan G Kshatriyan in Rudra Thandavam. In this flick he drops his style of packing his politics discreetly behind another sensitive issue and deliberately speaks his hate politics to his innocent target audience. 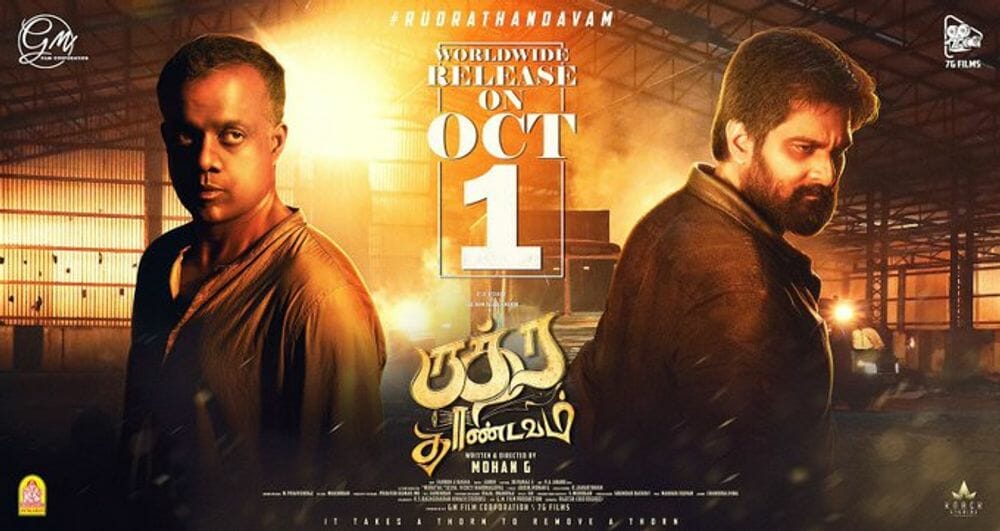 The film revolves around the drug trades that take place in Chennai. Rudra Prabhakaran (Richard Rishi), is a forthright cop living with his pregnant wife (Dharsha Gupta) in Dharmapuri. He is transferred to Chennai to cleanse the drug mafias in the city. He takes charge and begins to study the activities of the drug mafia and how they operate their business. His moves against the drug mafia puts him in the radar of Vathapi Rajan (Gautham Vasudev Menon), the leader of the political organization Manitha Urimai Ezhuchi Iyakkam. There is another side to Vathapi Rajan. He heads the drug trade in the city and uses the political organization to support his criminal network.

Meanwhile, Rudra Prabhakaran learns that the mafias deploy youngster in the locality to sell drugs. While on investigation he comes across two teenagers selling drugs. We get a bike chase scene. In unfortunate turn of events, one of them sustains injury and dies a week later. Rudra Prabhakaran is booked under the PCR act and is put behind bars. After this point, what follows is a tedious courtroom drama. Will Rudra Prabhakaran prove his innocence, and how he puts an end to drug mafia culture in the city is what makes the rest of the flick.

It is hard to review a film like Rudra Thandavam. The job of a movie reviewer is to talk about the craft. But for a flick where the political stands of a story teller occupies more space, it is difficult to look past that. It seems like director Mohan G takes immense pleasure in architecting his own terminologies. If it was, ‘nadaga kadhal’ in Draupadi, it is ‘crypto Christians’ in Rudra Thandavam. Director Mohan G presents his film as a film the wants to depict how teenagers are lured in to the drug trade and how they ruin their life by the usage of drugs. But in the running time of two and a half hours we do not get much of that angle. It seems like it is just a guise for what the film maker actually intends to deliver.

Unlike Draupadi, which did not have nothing other than furthering caste agendas, Rudra Thandavam has something of substance. It has a story that could have constituted to a decent crime drama. But Director Mohan G’s interest lies somewhere else. Like giving a clear caste shade to the characters, taking a small loophole in the system, and presenting it as the standard way of how things are done, condemn institutions that protects innocents from people in authority, and defending police brutality. These things are carefully planned and implanted in to the plot. Perhaps, these things are not done from a personal belief, and rather for the controversy it might stir up generating the much helpful publicity? By any chance?

In terms of performance the cast is solid. Actor Richard Rishi teams up consecutively for the second time with Mohan G. He sells Rudra Prabhakaran to perfection. His stout physique makes him fitting for the cop role. Director Gautham Vasudev Menon as actor seems odd on screen. He is indeed menacing but it is hard to buy him as a politician. Actress Dharsha Gupta has a limited screen time and is passable as a pregnant wife. Veteran actor Radha Ravi is natural as usual. Actors Thambi Ramaiah, Y. G. Mahendran, Manobala, and G. Marimuthu have done their part well. The rest of the cast has delivered what was asked of them.

On the technical front, music director Jubin’s tracks are not impressive and do not stay in our memory at least till the film ends. But he compensates for his lag with his energetic background score. Cinematographer Farook J Basha’s frames speaks for itself. He showcases his ability to operate his helicam. His aerial shots are enjoyable. Editor Devaraj S should have done better with his scissors. The film feels like a drag with its lengthy running time. For an action film the stunt sequences are poorly choreographed.

On the whole, differences aside, story teller Mohan G seems to have a good hold over his film making craft, but what he needs is a broad-minded thinking.