Hiphop Tamizha Aadhi has made efforts to make changes to his regular plotline. Of course, the film is packed with the regulars. A middle-class guy going after his dream, the sentiment angle, romance angle, and the presence of new face YouTubers. But what is different with Sivakumarin Sabadham and rest of Hiphop Tamizha Aadhi’s filmography is, it wants to lay light on a social issue.

Despite the differences, there is one thing that is indisputably fascinating about Hiphop Tamizha Aadhi – his evolution as an artist. Hitting the limelight back in 2011 with his controversial song ‘Clubbu la Mabbu la’, he went on to become a commercially successful director and lead hero right in his debut venture Meesaya Muruku. The films followed it were not commercially bad either. With Sivakumarin Sabadham he takes a new avatar. He turns producer. The story of Sivakumarin Sabadham is of a young man from a traditional weaver’s family fighting it out with a business tycoon to restore the collapsed business glory of the family. Is Sivakumarin Sabadham entertaining enough to consolidate Hiphop Tamizha Aadhi’s market as a lead actor? To know that let us get in to the movie review. 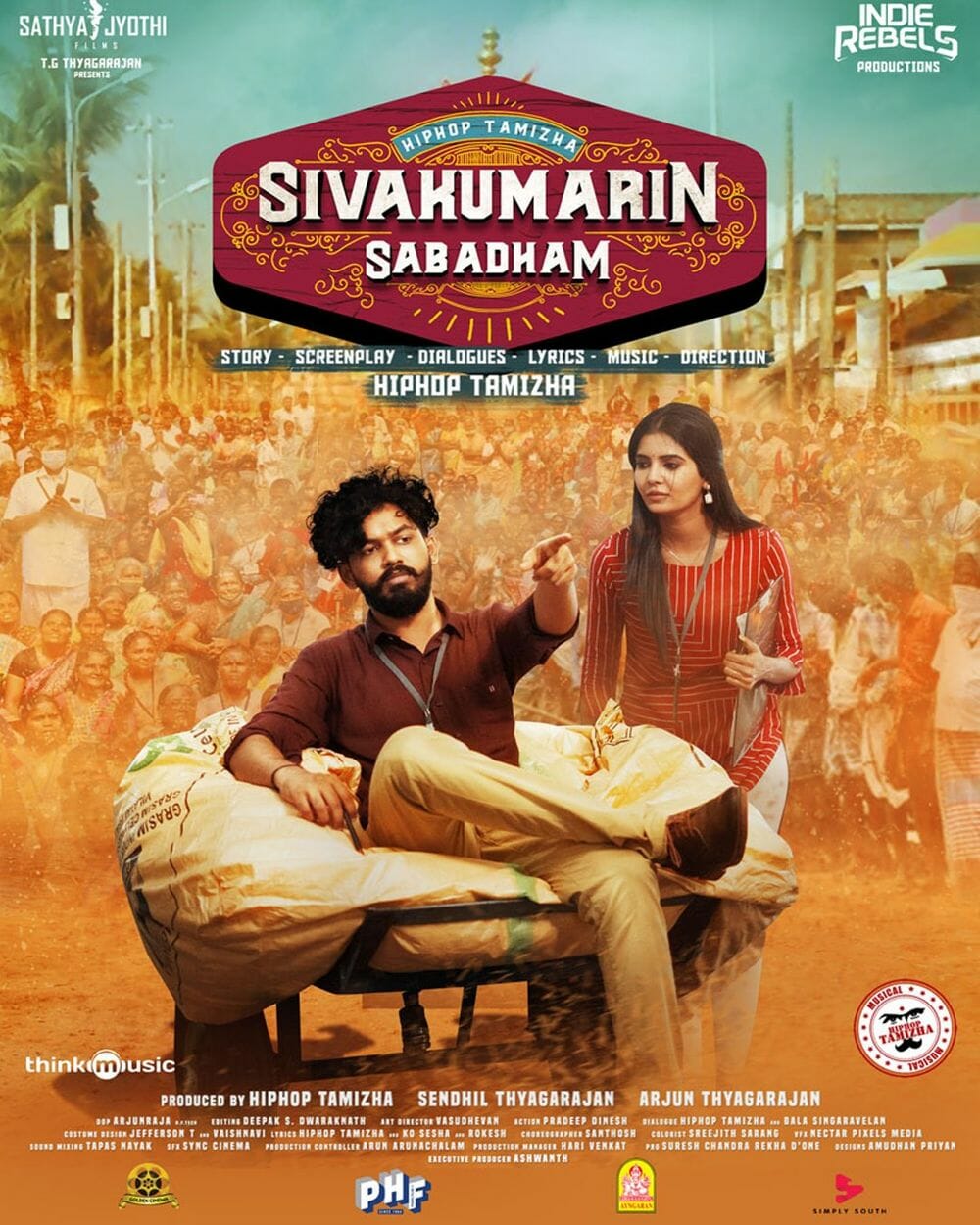 Sivakumarin Sabadham follows the events that take place within a family. Sivakumar (Hiphop Tamizha Aadhi) is a carefree youngster. He is brought up by his grandfather Varadarajan (Elango Kumanan) in the silk city, Kanchipuram. Varadarajan is a traditional weaver and is a respected man in the locality. The grandad and grandson duo have their share of fun in the city. But things take a turn for the worst when Sivakumar lock horns with a local cop. In order to avoid the situation escalating to bad blood, Varadarajan decides to send Sivakumar to Chennai to be under the care of his younger son Murugan (Prankster Rahul). Murugan is married to the daughter of a textile business tycoon Chandrasekaran with whom Varadarajan share a bitter history. He is the reason for the downfall of Varadarajan’s glory. Murugan is ill-treated by his father-in-law. To him Murugan should just be his rubber stamp.

Sivakumar comes to Chennai and stays with his uncle. He meets Chandrasekaran’s niece Shruthi (Madhuri Jain). He is smitten by her. This does not incite a good reaction in Chandrasekaran. When he comes to know of this, he insults Sivakumar and along with him he even kicks out his own son-in-law. Sivakumar takes the humiliation as a motivator and sets his mind on becoming a successful entrepreneur. He begins to take life seriously. And that is Sivakumarin Sabadham. Will Sivakumar succeed in building a successful business on his own and in process restore his grandfather’s glory and make him proud, is what makes the rest of the drama.

Sivakumarin Sabadham feels like two different categories of flicks put together. The first half of the flick deals with the regular checklist of Hiphop Tamizha Aadhi’s films. The college campus scenes, peppy dance numbers, and the comedies. In the second half director Hiphop Tamizha Aadhi tries to change the color of his regular film making template by infusing a higher degree of sentiment to the proceedings. Generally, films in Tamil cinema take up one particular relationship like father-son, mother-son, brother-sister, grandfather-grandson and portray the emotional connect between them. Here in Sivakumarin Sabadham it is raining sentiments between the family members. There is a Granddad sentiment, daddy sentiment, and hell you even get a sprinkle of uncle sentiment.

Interestingly Hiphop Tamizha Aadhi has made efforts to make changes to his regular plotline. Of course, the film is packed with the regulars. A middle-class guy going after his dream, the sentiment angle, romance angle, and the presence of new face YouTubers. But what is different with Sivakumarin Sabadham and rest of Hiphop Tamizha Aadhi’s filmography is, it wants to lay light on a social issue. Hiphop Tamizha Aadhi tries to play clever. If every film favors to talk of the farmer’s struggles, he picks the weavers issue that has been undermined for years, and explores it. He does it effectively, refraining from getting in to the preachy mode. On the positive notes, there seems to be a deliberate intent to write the lead women character well. Sample this, when Shruthi is harassed for being in a club, the lead hero of Tamil cinema utters, “Avano avalo ellam onnu dhan, arivu varappo ungaluku thaana puriyum”. For a second you are put in to trance. Then you go, whaaaaaat? Did I just hear what I heard? There are few stereotypes breaking here and there. Though minimal, it is still a good start.

Actor Hiphop Tamizha Aadhi is the same performer we witnessed in Meesaya Muruku. Nothing much has changed in terms of his performance. But the dancer in him has improved and he even seem to enjoy shaking his legs for the fast numbers. Actress Madhuri Jain has bagged a decent role and she does justice to it with her performance. Veteran actor Elango Kumanan makes his presence felt. Comedian YouTuber Prankster Rahul is bestowed with a meaty role. He travels as a sidekick almost throughout the flick. Unfortunately, he does not serve the purpose to why he was brought on board. The rest of the cast has delivered what was asked of them.

On the technical front, music director Hiphop Tamizha Aadhi ’s songs are clearly not at his best but they do hold our attention. His background score is thumping and helps in elevating the mass moments. Cinematographer Arjun Raja’s frames are adequate in covering the flick. Editor Deepak S Dwaraknath has done his part well in trimming the flick.

On the whole, though Sivakumarin Sabadham has its heart in the right place Hiphop Tamizha Aadhi’s formulaic scripting lets it down.