After a point, story teller Vineeth Varaprasad does not know how to move the entertainer and gets repetitive with his scenes. These portions are a real patience tester. Lift, not just suffers from repetitiveness but also from predictability. Without efforts we could sense what the characters are going to do. The characterization is not good either. We do not know anything about Guru and Harini. They are just two random strangers to us, struck in a Lift. For a film, that for the most parts happen inside a lift, 2 hours of running time seem a little longer.

Another day, another horror drama in Tamil cinema. When the word scare has lost its meaning in the state, in comes Lift. The trailer of the flick gave away a clear picture of what to expect of the entertainer. It has many newbies on board. Director Vineeth Varaprasad ventures in to Tamil cinema with the horror drama. At the moment, small screen actor Kavin Raj has things going his way. He has just finished working as an assistant director to film maker Nelson Dilipkumar in Doctor, and is gradually turning in to a silver screen star. The actor who was last seen in Natpuna Ennanu Theriyuma is back with his horror thriller Lift. Actress Amritha Aiyer plays the female lead role for the second time in Kollywood. So, is Lift solid enough to catapult actor Kavin Raj’s image as a lead hero in K-town? To know that let us get in to the movie review. 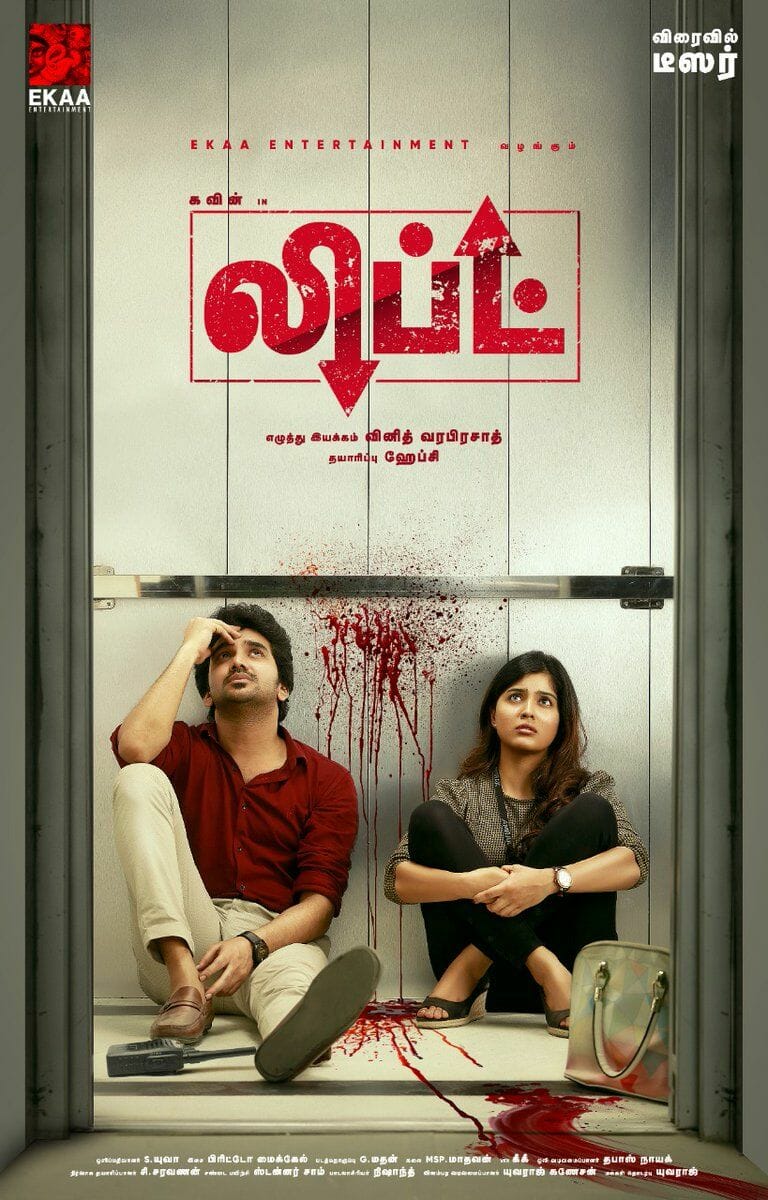 The drama follows the life of Guru (Kavin Raj), a young man who works in a corporate company in Bengaluru. He has been recently transferred to the Chennai branch. On his first day at office, he is introduced to his colleagues. When Harini (Amritha Aiyer), an employee who has been hired recently to the human resource department is introduced, we get a little flashback. Guru and Harini share a bitter past. By accident when Harini comes across Guru for the first time she asks him to snap a picture of her. He could have decently clicked a photo, returned the mobile, and walked away. Or if he is not okay with what he was asked to do he could have simply said sorry and carried on. But you see he is a hero and he is not supposed to do what ordinary persons do. So, he collects the phone from her, goes to a fish tank nearby, and drops it inside it. Cool attitude it seems. Seriously?

On the end of the day Guru is made to stay in the office to finish an emergency project for a client. After finishing up the works he gets ready to leave the office. That is when he gets the scare of his life. He tries to use the Lift to get to the ground floor but he could not. He ends up in the same floor. The Lift works in an erratic manner and he begins to experience paranormal activities. If you begin to anticipate for a horror survival drama, there is a twist in the tale for you. You are presented with a romance angle. Director Vineeth Varaprasad pens a comfortable scenario to make just the heroine to stay back in the office.

Guru stumbles up on Harini who has been locked in the document room. Now they both go around inside the office but could not leave it. While the ghosts try to scare them, they appear to be scared. But then they joke around and run their little love show. Perhaps, a strategy to distract the ghosts? Who are these ghosts, why they are not letting Guru and Harini out of the office, and will Guru and Harini come out of the office alive, is what makes the rest of the flick.

When Lift begins it promises to be a different horror drama to the irksome horror dramas, we have experienced for a decade or so in Tamil cinema. Just when you begin to trust its promise, it blatantly betrays you and walks down the same path the rest of its predecessors have. To be fair there are moments where Lift lights up. But immediately it ruins the mood with a poorly written scene. The desire to cover multiple genres in a single flick is so scribed in the minds of our story tellers, that they could not just neglect it. Film maker Vineeth Varaprasad work the comedies, then shifts to horror thrills, and then the romance. Guess, we should be grateful he did not contemplate the ‘mass action’ sequences.

After a point, story teller Vineeth Varaprasad does not know how to move the entertainer and gets repetitive with his scenes. These portions are a real patience tester. Lift, not just suffers from repetitiveness but also from predictability. Without efforts we could sense what the characters are going to do. The characterization is not good either. We do not know anything about Guru and Harini. They are just two random strangers to us, struck in a Lift. For a film, that for the most parts happen inside a lift, 2 hours of running time seem a little longer.

Actor Kavin Raj just about manage to sell Guru. But the actor has miles to walk to earn the badge of a bankable hero. Actress Amritha Aiyer attempts to cover the inadequacies in her performance through her charm. But her attempt simply ends up highlighting them. Actress Gayatri Reddy’s role does not have anything to add to the plot. The rest of the cast has delivered what was asked of them.

On the technical front, music director Britto Michael’s background scores add value to the drama. Even his tracks are enjoyable. It is not easy to film events taking place inside a small closed space. Cinematographer S. Yuva has done his best in covering the flick. Editor G. Madan’s sharp cuts enhances the work of his colleague.

On the whole, if the repetitiveness and the predictability factor had been ditched, Lift actually could have been a one-time watch entertainer.