Anthologies are becoming a favorite type of content for film makers as well as the producers. The limited work and budget friendliness seem to be the reason. Last year Tamil cinema witnessed Anthologies in the likes of Navarasa, Paava Kadhaigal, Sillu Karuppatti, Aviyal, and Putham Pudhu Kaalai. This year in the very beginning we have the second edition of Putham Pudhu Kaalai titled Putham Pudhu Kaalai Vidiyaadhaa. While the former tried to instill hope during the epidemic, the latter covers the tragedies of the difficult time. So, how has the second edition come out? Is it solid enough to get the audience’s attention? To know that let us get in to the movie review. 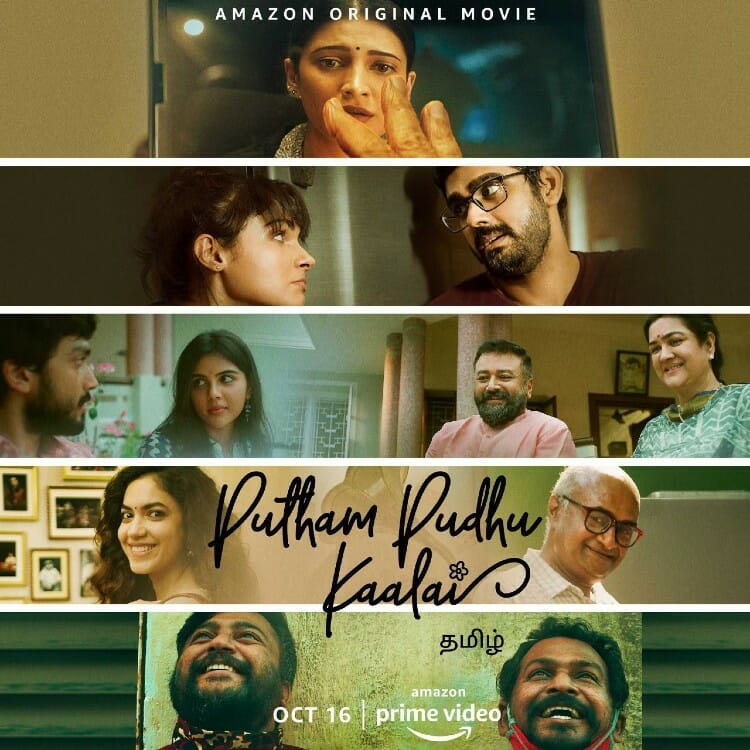 The first short, Mugakavasa Mutham by Balaji Mohan is love tale under an unexpected circumstance. Kuyili (Gouri Kishan) and Farook (Kalloori Vinoth) are two young cops who are on duty implementing the lockdown protocols. They come across a boy who is on his way to meet his girlfriend who is about to be married off against her wish. Sympathized by his situation, Kuyili and Farook along with few other frontline workers decide to help him. While they are aiding for another couple’s love, Kuyili and Farook fall for each other. Are they able to unite the other couple, is what makes the crux of the short. Director Balaji Mohan plays to his strength. He spins a love tale with a couple of comedy stiches here and there. He also attempts to cover the plight of cops who are reprimanded for just doing their duty. While the intention seems to be good, the emotions seem contrived. Before we could connect with the characters and the flick is done.

Loners by Halitha Shameem depicts the healing process of two broken souls. When the short opens Nallathangaal (Lijo Mol Jose) gets a food delivery that she has not ordered. In a short while, she receives a voice note from her ex-boyfriend stating that he misplaced the order and asks her to have it. She begins to eat the food recalling the good times she had with him. Then the reality forays, taking her to the aching break up that she is still trying to process. After finishing up she gets ready to attend an online function and makes herself presentable in a typical virtual meeting dressing code. She meets Dheeran (Arjun Das) who has his own sufferings in life, and they hit it off well. Loners has the melodiousness that we can experience in story teller Halitha Shameem’s films. If the movie had been just limited to that it would have worked well. But Halitha Shameem tries to cover intricate stuffs that are too deep to cover in such a short run time making them appear force thrust in to the plot.

The next short is Mouname Paarvayaai by Madhumitha narrates the relationship of an older couple Yashoda (Nadiya Moidu) and Murali Krishnan (Joju George). Like the title gives away, they do not communicate much but maintain a functional symbiotic relationship. We experience a deep-rooted silence between them, and in it the love keeps brewing. There is an underlying reason behind the silence. Yashoda is passionate about playing flute. Murali Krishnan breaks her flute on an instance pushing her in to a nutshell. Realizing his mistake, Murali Krishnan tries to win her back being a caring husband. Director Madhumitha captures the so many beautiful emotions in the voiceless moments between the couple. Even with barely any dialogues Mouname Paarvayaai easily becomes the best short of the collection.

Fourth short The Mask by Surya Krishna tries to be a mixer of a little too much than what could be discussed in a short run time. The short follows the life of Arjun (Sananth) who is hesitant to talk about his sexuality to his father, and that puts things off between him and his partner Paul (Arun Kurian). Just when we begin to think it is going to be about their struggles to lead a normal life, story teller Surya Krishna introduces a third character Velu (Dhilip Subbarayan) Arjun’s childhood friend. From there they hold the precedence. The conversation between them inspires Arjun to reveal his true self to the world. The issue here is that the conversation is not strong and deep enough to get us to pin for Arjun. They merely feel exaggerated and cinematic.

The final one by Richard Anthony is Nizhal Tharum Idham explores about grief and the recuperation from it. Shobi (Aishwarya Lekshmi), is a young independent woman who is very careful about whom she lets in to her circle in order to avoid the emotional turmoil. This is also the sort of relationship that she has with her father. Every time he tries to communicate with her she puts him off saying that she is busy and will ping him later. On one instance she texts him the same and goes to continue cutting vegetable. She slices her finger. In a short while she is informed that her father has passed away. The safety wall that she had erupted to safeguard herself shatters, and the grief hits her hard. She wants to get over the demise of her father and swiftly connect to the everyday of life. But she could not, and find herself tangled with the memories of her father and loss of him.

On the technical front, visuals and music were at its best in the first installment. The same cannot be said for this version. The musical department of the film handled by Sean Roldan, Goutham Vasu Venkatesan, Karthikeya Murthy, Kaber Vasuki, and Pradeep Kumar is okayish. Cinematography by Preetha Jayaraman, A Vasant, Raghav Adhithya V, Mukesh, and Vikas Vasudevan is adequate. The editors have done a decent job trimming the film.

On the whole, Putham Pudhu Kaalai Vidiyaadhaa suffers from the same fate that most anthology drama suffer, time constraint, and that clips the entertainer from evoking authentic emotions.