Storyteller M Muthaiah is one of those directors who fashion a brand around them. So, the audience can precisely know what to expect of their films. On that note, director M Muthaiah has positioned himself alongside director Hari when it comes to the rural action genre. The movie is about a daring young man who takes on his domineering egotistical father to save his brothers from his clutches, and make him pay for his mistakes. Actor Karthi who was last seen in the action film Sulthan is back on screens with his mass action masala flick Viruman. Actress Aditi Shankar, daughter of director Shankar makes her debut as a female lead in the film. So, how has the mass action masala drama Viruman come out? Will it be a good commercial success for actor Karthi, and be a memorable debut for actress Aditi Shankar in Tamil cinema? To know that let us get into the movie review. 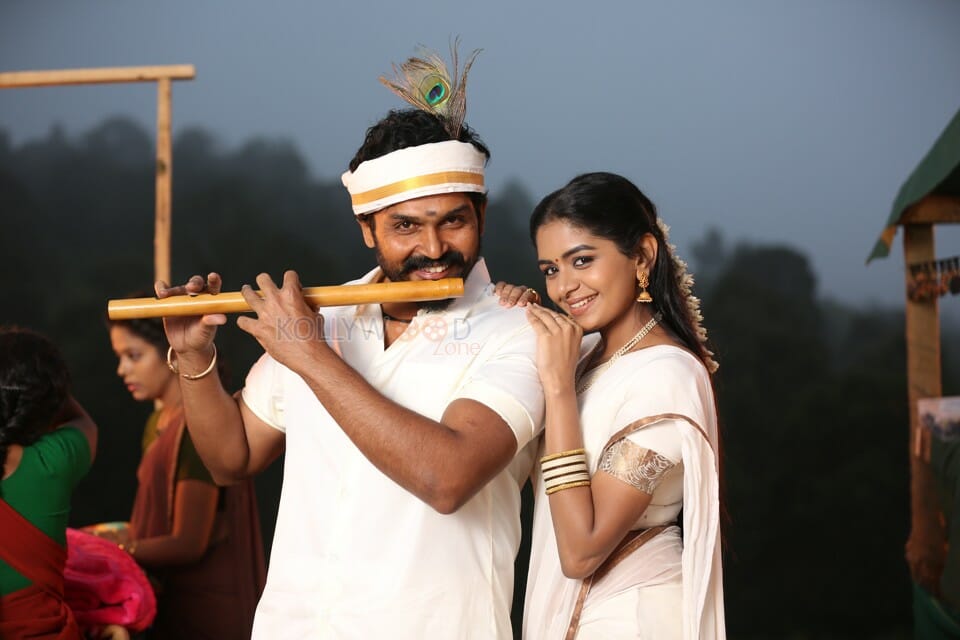 Viruman is centered around Muniyandi (Prakash Raj), an arrogant man whose pride and status comes before everything and everyone including his own family members. To set the context, he is someone who would not hesitate to let his own sister die – even when he had an opportunity to save her – just because she didn’t align to his liking, and acted on her own to choose her life partner. Life with him is a hell for his wife Muthulakshmi (Saranya Ponvannan), who not only has to put up with his abuses, but must do so respectfully. When she finds out about his affair, and confronts him, he casually asks her to live with it. Reaching the tipping point, she takes a drastic decision, and ends her life by burning herself. Infuriated by this, his younger son Viruman (Karthi) goes after his father with a long sickle to slaughter him. He is stopped. The matter comes to court. Viruman is instructed not to harm his father. He accepts, but refuses to live with his father. He seeks the guardianship of his uncle’s Niraipandian (Raj Kiran), and Balu (Karunas).

Years pass, Viruman grows up under the care of his uncles, which only strengthens the bitterness between him and his father. This also creates uneasiness between him and his brothers Selvam (Vasumithra), Muthukutty (Manoj Bharathiraja), and Ilango (Rajkumar). They behave derisively with him. But he does not mind it, as he loves them so much. Viruman is in love with Theanmozhi aka Theanu (Aditi Shankar), the sister of his elder brother’s wife. But Theanu hates him, and always takes the side of Muniyandi. She sees the good side of Viruman, when Selvam needs a job, he is turned down by Muniyandi, but Viruman comes to his rescue. Yep . . . yep . . . the bell rings. Things turn ugly when Muniyandi learns about their relationship. Will there ever be peace in the family, and what price do they have to pay to get it, is what makes the rest of the flick.

Director M Muthaiah has taken his template film making to a new level in Viruman. It is like watching his whole filmography in a span of two and a half hours. Imagine that. Introduction of lead hero in the typical rural mass culture fashion (sort of the ena mama soukiyama style). The heroine gets introduced in the most devotional and as an epitome of pureness (the kudumba Koothuvellaku). Throw in the dramatic emotionally draining family tussle where one person sacrifices everything to cling on to a family that could not respect him any lesser. After initial hostility the heroine alone gets to know the goodness in the man. What then? Of course, a romantic number. Sprinkle some bone breaking stunt sequences. Howdy . . . How could we skip the struggle of comedy artists cracking and laughing for their own jokes? Storyteller M Muthaiah has followed the formula to the T. When are film makers of Tamil cinema going to get weary of this checkbox ticking style of filmmaking? Will such a day exist in the future?

Actor Karthi has turned on his Paruthiveeran mode. He seems to have had great fun playing his part.  Actress Aditi Shankar overperforms for the most part. The actress has a lot of work to do before she could produce a flick on her own. Actor Prakash Raj is natural as a headstrong man, and pulls off his part effortlessly. Veteran actress Saranya Ponvannan makes her presence felt even in a short run time. Veteran actor Raj Kiran is effective as usual. Despite a dozen comedy artists like Soori, Karunas, Singampuli, Ilavarasu, Myna Nandhini, G Gnanasambandam, Pattimandram Raja, and Vaiyapuri, Viruman hardly makes us laugh. Actors Vadivukkarasi, R. K. Suresh, Manoj Bharathiraja, G. M. Sundar, and Rajkumar have all chipped in and have done their part well. The rest of the cast has delivered what was asked of them.

On the technical front, music director Yuvan Shankar Raja is yet to reach his best self. His songs are pretty average. Even his background score is deafening, aimed at milking the emotions out of the audience. Cinematographer Selvakumar S K has covered the drama from best angles, and has set up the rural frame well. Editor Venkat Raajen for his part has put his scissors at the right spots to enhance the work of his fellowman.

On the whole, director M Muthaiah’s Viruman might struggle to cater even to the fans of the genre but surely leaves the rest of the audience famished.