After the Malayalam remake Koogle Kuttappa, in comes Visithiran another remake from the same industry. The project is the official remake of superhit blockbuster Malayalam film titled Joseph helmed by director M. Padmakumar, who, also has directed the Tamil version. The original version had actor Joju George in the lead role. The drama is about a proficient cop who quits his police job after suffering a personal loss but is called back to aid the department to solve complex cases. Producer and actor R. K. Suresh who was last seen in Vettai Naai is back on screens with his police procedural flick Visithiran. Actresses Poorna, and Madhu Shalini are seen in the supporting roles. So, how has the entertainer come out? Will it aid producer R. K. Suresh to earn a bankable lead hero image in Tamil cinema? To know that let us get in to the movie review. 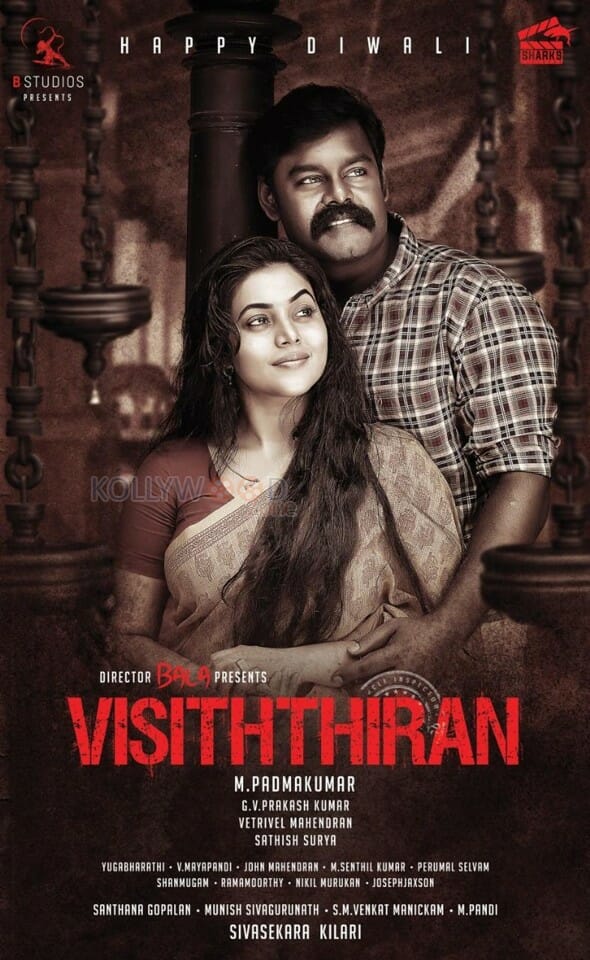 The movie follows the life of Maayan (R. K. Suresh), an astute police officer who turns an alcoholic while dealing with his psychological suffering. Visithiran opens in a double homicide crime scene, the cops have taken the scene under their control. The police procedures are underway. The SP who is investigating the case, is waiting for someone. An inebriated Maayan arrives. He walks through the crime scene, studies it for a while, does some enquiries, and leaves the spot. He then joins the staff who have come to help remove the dead bodies, for a drink. When asked to explain his behavior, he points to a person present in the spot as the offender. The person is arrested, and Maayan presents a theory. Everyone goes dumbstruck. He returns home to his quiet world of loneliness. Later, he is informed that his ex-wife Stella (Poorna), is admitted to a hospital following an accident. He rushes to see her.

As the film unfolds, we learn that Visithiran was married to Stella. In a devastating circumstance, Visithiran comes across his ex-lover (Madhu Shalini). From that point, he becomes emotionally unavailable, and things get bitter between him and Stella, which leads to their separation. The situation becomes even worse, when he loses his daughter to an accident. Cut to present, he begins to enquire how the accident took place. At a stage he finds similarities between the accidents of his daughter and his ex-wife. He suspects foul play. As he digs deep, his suspicion gets stronger. He grows laser focused, and brings forth his investigative expertise to get to the understanding of what really led to the accidents. While doing so, he unearths a callous mafia that has been operating in the locality for years. Are the accidents of his daughter and ex-wife a natural occurrence, or were they planned and orchestrated, what has got to do with the mafia operating in the region, is what makes the rest of the flick.

Medical thrillers are not new to Tamil cinema. We have had our share of them in Ajith Kumar’s Yennai Arindhaal, and Sivakarthikeyan’s Kaaki Sattai. But Visithiran creates a far more impact than them. Shahi Kabir’s writing and director M. Padmakumar’s sound craft makes all the difference. There are two reasons why Visithiran is able to sell the medical mafia message more efficiently. One, it has a gripping story to wrap the message in, two, it is dearth of pointless commercial fluffs. Visithiran starts off as a slow burner, with a striking opening scene setting up the stage. The film’s lead character Maayan draws us towards him and gets us inquisitive to know why he is the way he is.

Gradually, Visithiran introduces us to the characters of its world. The pleasant element about Visithiran is, none of its characters are written in a dismissive fashion. Though its focus is on narrating the emotional turmoil of Maayan, it gives space for others to have a hold in the proceedings. It is an approach that we do not see often in Tamil cinema. At no point does it give away more than necessary for the audience to figure out the plot. By this, it keeps the audience on the hook building anticipation for what is next. On a down note, the dialogues do not have an influential bearing to convey the emotional bandwidth of Maayan. But for a film like Visithiran, its failings could easily be overlooked.

Actor R. K. Suresh has put on weight for his part. His hard work is evident on screen. He has improved a lot as a performer. He sells Maayan convincingly despite his share of flaws. Actress Poorna makes her presence felt even in a limited screen time. Actress Madhu Shalini has done justice to her part. Actor Anil Murali is functional. Actor G. Marimuthu is as effective as usual. Actors Bagavathi Perumal and Ilavarasu are adequate. Actor George Maryan serves his purpose. The rest of the cast has delivered what was asked of them.

On the technical front, musician G. V. Prakash Kumar is clearly not up to his standards. His songs are not inspiring. But he adds value to the flick with his affecting background score. Cinematographer Vetrivel Mahendran has done a decent job covering the drama. Editor Sathish Suriya compliments the work of his colleague with his scissor work.

On the whole, actor R. K. Suresh’s medical crime thriller Visithiran is a gripping tale that is backed by good performances that keep us invested in the film till the very end.