Everybody wants to be either a CM or a hero in Tamilnadu. Speaking of which producer turned actor R. K. Suresh who is known for his menacing antagonist roles has shifted gears to play the lead hero in mass action film Vettai Naai helmed by story teller S. Jai Shankar. A producer turning hero is not new to Tamil cinema. Many film producers have joined that list. But the statics of producers attaining commercial success as lead heroes is near to nil. Director Jai Shankar has taken up a plot line (a good henchman who works for a wicked antagonist attempts to lead a normal life after marriage) that is done to death in Tamil cinema to cook his story. So how has the film come out, is Vettai Naai solid enough to beat the odds and attain success? To know that let us get in to the movie review. 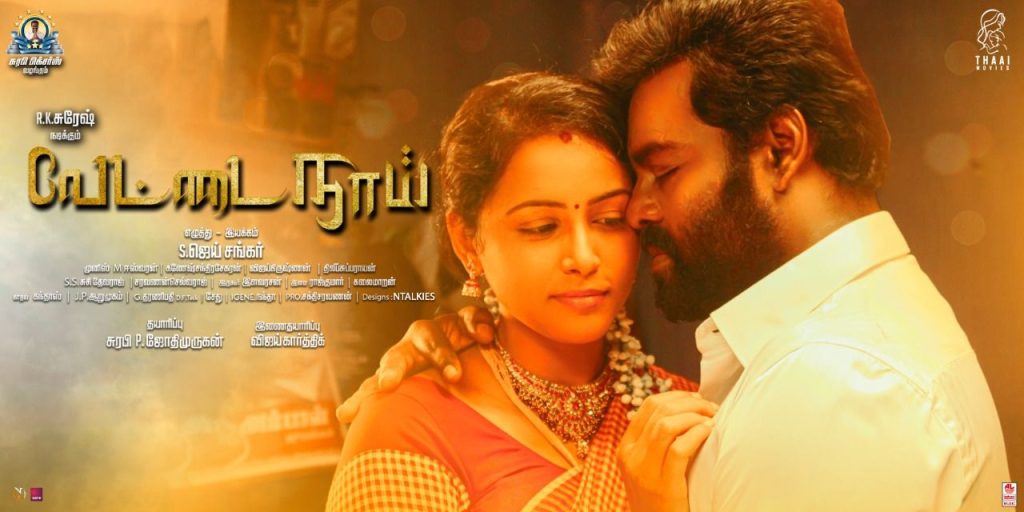 The film follows the life of a hooligan Sekar (R. K. Suresh). A gang leader (Ramki) calls the shots in a village located in Kodaikanal. Sekar works as a henchman for him. All Sekar knows is to fight and get drunk. Sekar is so loyal to his boss that he would begin to break bones just at the blink of his eyes. Things get complicated when Sekar falls in love with a girl in his village (Subiksha). The girl’s family refuses to marry off their daughter to Sekar citing his violent nature and his job as a thug. His boss steps in and instructs the girl’s parents to get her married to Sekar. In unfortunate turn of events, Sekar’s relationship with his boss runs in to a rough patch.

Meanwhile, after marriage Sekar’s wife asks him to quit being a henchman. She wants him to work hard to lead a normal life. Taking up his wife’s advice Sekar leaves his past life behind him and gets a proper job to take care of his wife. His boss and his enemies who were waiting for the right time to draw blood exploit the situation which harms Sekar and his wife. Now Sekar is forced to return to his past life. Will Sekar take up the violent path once again to defend his family or will he continue to be the new man he chose to become, is what makes the rest of the entertainer.

Some films make you feel bored, some films offer you a bad cinematic experience, and then there are films that make you feel that their very existence is a squander. R. K. Suresh’s Vettai Naai is one such drama. Right from the screenplay to the technical department everything has collapsed. The collapse begins with director Jai Shankar himself; he has indulged in lazily writing. He moves the film to his own comfort. His characterization lacks depth which makes it difficult for us to connect with the characters. Despite having artists like Ramki, Namo Narayana the casting looks weak. It seems like the only department that the unit was focused on, is the stunt department.

Director Jai Shankar has borrowed the tried and tested plot line of Tamil cinema which has delivered success now and then, depending on the director’s ability to tell it in an engaging manner. Director Jai Shankar struggles to do it. The problem with picking a done to death plot line is, the audience would have watched nearly hundreds of movies with the similar plot line. So the predictability factor makes it harder to get the audience hooked in to the entertainer in the first place. Taking a popular plot line is not a crime. But using the same treatment that many films had is. Story teller Jai Shankar has not just borrowed the plot line but also few scenes from popular films. He places it all over the plot and tries to weave it together but falls short of making it an engaging drama.

Actor R. K. Suresh quickly has curved a place for himself as an effective antagonist. Even here the actor shines as a thug. But it is difficult to buy him as a lead hero. The actor clearly struggles in the emotional and romantic portions. His performance feels artificial. Actress Subiksha is impressive as an innocent woman. Actor Ramki is adequate but for his experience he could have done better. Actor Namo Narayana is apt in the role of a drunkard. The rest of the cast has delivered a middling performance.

On the technical front, music director Ganesh Chandrasekaran’s tracks do not stay in our attention for long. Even his background scores are only effective in the action portions. Cinematographer Munish M Easwaran had a lot of scope to cover the entertainer but sadly he has squandered the opportunity. Given the story is set at the backdrop of a hilly region he could have treated us to a visual feast by covering scenic locations. Editor Vijay Krishnan’s scissors are not sharp.

On the whole, R. K. Suresh’s Vettai Naai has put nothing in the right place as a result it easily becomes a coliseum of collapse.