It is a season of remakes in Tamil cinema. After the Malayalam remakes Visithiran, and Koogle Kuttappa, it is time for a Hindi remake. Nenjuku Needhi is the official remake of super hit blockbuster Hindi film titled Article 15 helmed by director Anubhav Sinha with actor Ayushmann Khurrana in the lead role. The drama is of a cop who is in charge of a case that involves three missing women, all from the underprivileged caste. Producer and actor Udhayanidhi Stalin who was last seen in Psycho is back on screens with his political drama Nenjuku Needhi. Actress Tanya Ravichandran plays the female lead role in the film. Director Arunraja Kamaraj of Kanaa fame has helmed the flick. So, how has the entertainer come out? Has it stayed faithful to its original, and will it replicate the success of its original? To know that let us get into the movie review. 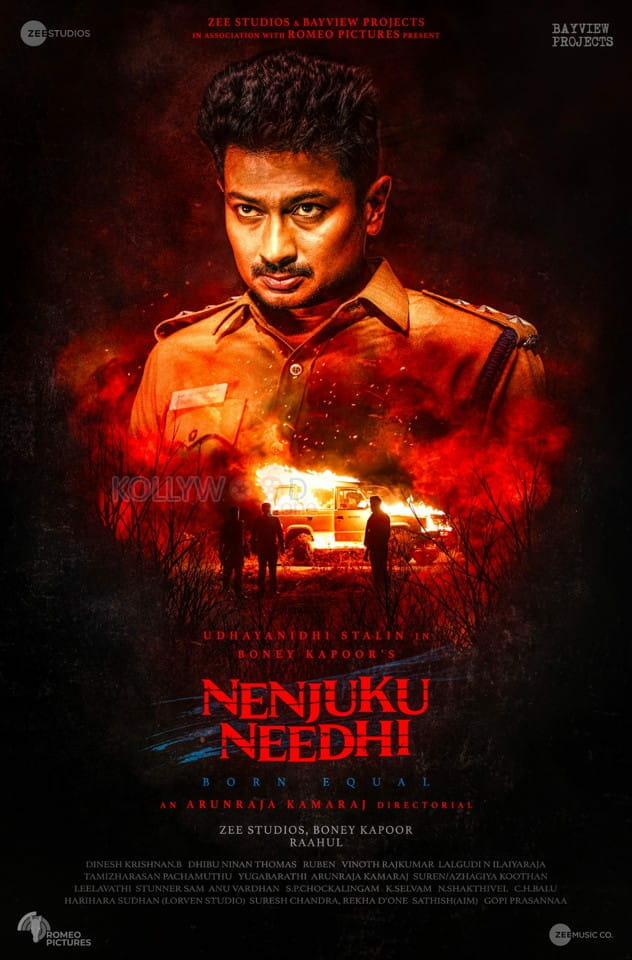 The movie follows the life of Vijay Raghavan (Udhayanidhi Stalin), an IPS officer who has returned to India after studying abroad. He is posted to a rural region in Tamil Nadu where caste discrimination is a normal norm in the society. Despite Vijay Raghavan’s knowledge about the caste system of India, he finds it difficult to cope with it in life. There is caste identity even behind minor actions of people. He witnesses how the influence of caste wields power even in the police station. Upset with the system, he takes it upon himself to educate people on the wickedness of caste, and shape a classless society.

But before he could set up on his mission, three women from an underprivileged background, who work in a local factory go missing. Two of them turn up dead, and what has happened to the third one remains a mystery. Now, it is up to Vijay Raghavan to solve the case that brings too much heat and pressure on him. His higher officials do not cooperate with him, and unleash everything within their power to deter him from solving the case. Will Vijay Raghavan withstand the pressure of his superiors, and will he be able to bring the persons who committed this gruesome crime to justice, is what makes the rest of the flick.

Article 15, the parent version of Nenjuku Needhi became a talking substance because of the touch of reality with which it was made. But its Tamil version disregards it. For a film that claims to detest the concept of a king, has it as its business to glorify its lead character at every possible angle. The ultra-slow motions, the condescending tone of his character, the lectures, the image of a savior, the reference to Mountbatten, in short, he is everything, ‘The lead character.’ What is even worse is, in order to achieve this mark, a revolutionary character Kumaran played by Aari Arujunan in the film is carefully toned down so that it does not overshadow the hero’s image. Is it not what the film claims to stand against? What happened to the talks of all are equal? Perhaps, it is the case of author George Orwell’s Animal Farm, “All animals are equal, but some are more equal than others.”

It is this hypocritic approach that distinguishes Ayushmann Khurrana’s Article 15 and Udhayanidhi Stalin’s Nenjuku Needhi. When remaking a flick, there is nothing wrong in making changes to the plot of the original in accord to the sensibilities of the audience for whom it is made. But director Arunraja Kamaraj has revised the plot of Article 15 to his convenience. He takes up all the caste discriminatory incidents that has been reported in the state in the recent past, and has shoved it in to the plot. Not just holding there, he makes an attempt to blow it out of proportion just for the purpose of making us empathize with these events. To be fair, Nenjuku Needhi has its clever moments like those of Asuran, Jai Bhim, Pariyerum Perumal, and Madras but only in bits and pieces. As a complete product, it could not raise the voice against the atrocities of upper caste people and the system built by them as fiercely as those dramas did. Thus, director Arunraja Kamaraj unfairly guns down the impact that Article 15 engendered.

It is criminal to compare actor Ayushmann Khurrana’s performance with Udhayanidhi Stalin’s. But the actor manages to walk it through. Actress Tanya Ravichandran has little to offer but does justice to her part. Actor Aari Arujunan has delivered an impactful performance. Actress Shivani Rajasekhar is adequate. Actress Yamini Chander is effective. Actors Ilavarasu, Thambi Ramaiah, and Suresh Chakravarthy, have all chipped in and have played their part well. Actors Ramesh Thilak, and Sayaji Shinde, serve their purpose for being on board. The rest of the cast has delivered what was asked of them.

On the technical front, music director Dhibu Ninan Thomas’s songs are middling. But he adds value to an extent in constructing the poignant and mass moments with his background score. Cinematographer Dinesh Krishnan has covered the drama from the best angles possible. Editor Ruben has put his scissors to fine use.

On the whole, director Arunraja Kamaraj dilutes the spirit with which its original Article 15 drove home the message it set out to drive.

Agni Siragugal Teaser: Vijay Antony And Arun Vijay Clash With One Another!