Bogan is an action movie which was written and directed by Lakshman who has earlier directed Romeo Juliet and produced by Prabhu Deva and Ganesh on behalf of Prabhu Deva Studios. The movie features Jayam Ravi, Aravind Swami and Hansika Motwani in leading roles. D. Imman had composed the music and the cinematography work was made by Soundararajan. 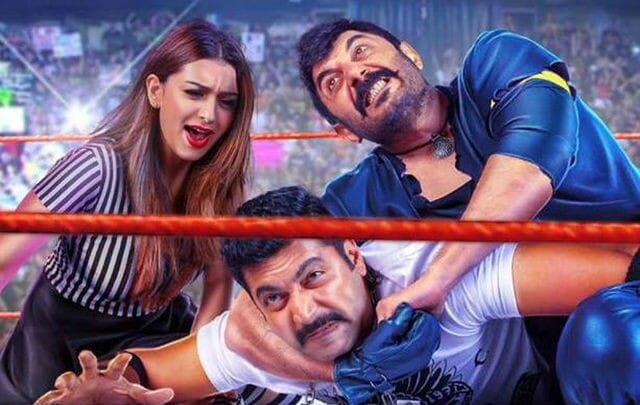 Anthony has looked after the editing part and the movie was distributed by Sri Green Productions Company. Actors like Akshara Gowda, Varun, Narendra Prasad, Nassar, Aadukalam Naren, Shruti Ramakrishnan and VTV Ganesh have acted in supporting roles in the movie.

Hansika Motwani had acted romantically and her performances in the movie will be appreciated by many. So, the plot has more shades of Hollywood movie ‘Face Off’ and Tamil movie ‘Chinna Vaathiyaar’. Body swapping is the main crux of the story and Director Lakshman has lifted many scenes from Hollywood. Wish he focused more on screenplay rather than copying scenes.

The movie’s song which was released earlier had received good response and feedback from many. Damaalu Damaalu Dumeelu Dumeelu song and Sendhoora songs are pleasant to hear. Jayam Ravi and Hansika Motwani have acted in Romeo Juliet and after the success of the movie, both are pairing again in this movie. Their chemistry is just perfect.

Jayam Ravi and Arvind Swami has got equal screen time and they complement each other very well.  It is Jayam Ravi-Arvind Swamy all the way with the other doing a good job.

The movie was expected a lot as Jayam Ravi and Aravind Swami’s Thani Oruvan was a successful movie and the actors have proved their individuality.The cinematography work was done excellently and the editing part was also made neatly. However, the movie has some flaws and it could have been better.

Overall, ‘Bogan’ will disappoint if you expect another ‘Thani Oruvan’.