Director Pradeep Ranganathan must be appreciated for his attempt to take on a fresh plot in his very first film. He also deserves to be appreciated for his screenplay which has saved the film to an extent which otherwise would have been a tedious watch in the end. On the whole, even in spite of illogical elements Comali manages to entertain to an extent though not as a whole drama.

After starring in intense thrillers and social dramas actor Jayam Ravi finally breaks his shackles and has derailed from the serious track to fun track with his comedy entertainer Comali. The buzz around the flick was very high when it was announced that the actor has shed 20 kilos to don a role in the film but the anticipation further hyped when the trailer had scenes trolling Rajinikanth which the fans of the actor found to be in bad taste and hence the scene was removed. This put the film in the attention of public and acted as a great launch pad which the story teller Pradeep Ranganathan has failed to capitalize on by adding over dramatic portions in the second half of the film. 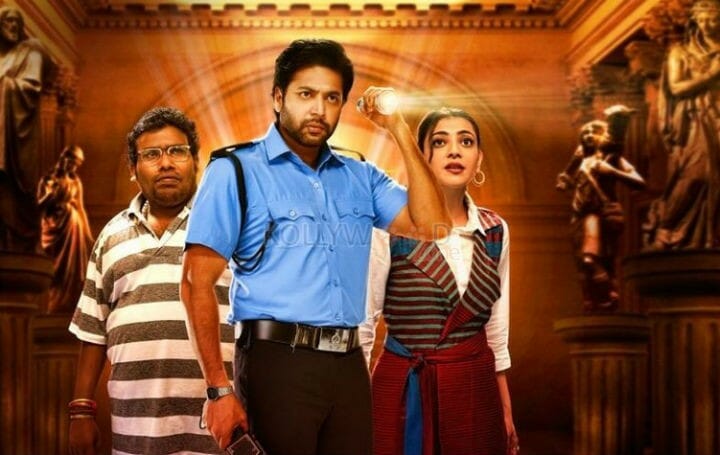 Ravi (Jayam Ravi) a school boy in the 80’s leads a normal life as a teenager. He falls in love at the first sight with his classmate Nikita (Samyuktha Hedge). What does a hero do when he falls in love with a girl in Tamil cinema? Either he indulges in heroic act in front of the girl or send her gifts. Here our hero does the latter. He gifts her a dearie idol which he holds close to his heart. Following which in the year 1996, in an unfortunate event Ravi meets with an accident which put him in coma. He comes out of coma after 16 long years only to find that the world he lived in no longer exists and is taken over by mammoth technological and economical evolution. He finds it hard to fit in but his friend Yogi Babu and his family members try to aid him in coping up with the world.

He slowly comes to term with the present day world and attempts to take care of himself financially as well by taking up a job as a security guard. And latter he starts his own YouTube channel as well under the name Comali. He gets acquainted to Kajal Aggarwal who tells him that the idol that he gifted to Nikita a long time ago is an expensive one and how it is passed on within his family lineage generation after generation. Now Ravi wants to get back the idol that belongs to his family. The problem is, now the idol is with a notorious criminal and MLA Dharmaraj (K. S. Ravi Kumar) who claims that it is his property. Did Ravi manage to get back the idol, if so how did he do it, is what makes the rest of the movie.

The director has cleverly used the alienation of character Ravi to the maximum exploitable way possible and it has worked out tremendously well. With actor Yogi Babu being at his best has made the first half of the film very entertaining. But the latter part has overly dramatic scenes which makes it difficult for the audience to connect with the drama.

Actor Jayam Ravi as usual has put on a stunning show in the drama. Particularly, the actor had scored exceptionally well in the scenes that proceeds after him waking up from coma. He has depicted the character that battles to come to terms with the ways of the world that he lived in to the present day world in an extraordinary way. However, the actor could not refrain himself from giving us a glimpse of his character from Nimirthu Nil. Actor Yogi babu who has been lately accused of putting on lackluster comedy show has once again come back to his form in the venture. Actresses Samyuktha Hegde and Kajal Aggarwal have very less scope in the script to showcase their acting flair. Rest of the cast is adequate and has delivered what was asked of them.

On the technical front, cinematographer Richard M. Nathan’s camera has framed the drama in a whole different angle; particularly he stands out with his frames of the Chennai floods which have been shot with lot of adeptness. Hip Hop Tamizha’s background score has helped in adding to the comical scenes though he fails to impress with his songs.

Director Pradeep Ranganathan must be appreciated for his attempt to take on a fresh plot in his very first film. He also deserves to be appreciated for his screenplay which has saved the film to an extent which otherwise would have been a tedious watch in the end. The film would have been a lot better if the story teller had chose not to incline towards the melodramatic tone in the second half of the film.

On the whole, even in spite of illogical elements Comali manages to entertain to an extent though not as a whole drama.