A decade ago, a film like Koogle Kuttappa would not have even attracted a producer in Tamil cinema. But today a decision to remake it from another language has been made. The future looks promising. The film is the official remake of superhit blockbuster Malayalam drama Android Kunjappan Version 5.25 directed by Ratheesh Balakrishnan with actor Suraj Venjaramoodu in the lead role. The movie tells the tale of a grumpy aging father who gets dangerously attached to a robot caretaker presented to him by his robotics engineer son. Actor K. S. Ravi Kumar who was last seen in Mathil is back on screens with his science fiction comedy drama Koogle Kuttappa. Actors Tharshan Thiyagarajah and Losliya Mariyanesan are seen in the supporting roles. Story tellers Sabari and Saravanan have helmed the film. So, how has the entertainer come out? Is it solid enough to offer a refreshing cinematic experience to the audience? To know that let us get into the movie review. 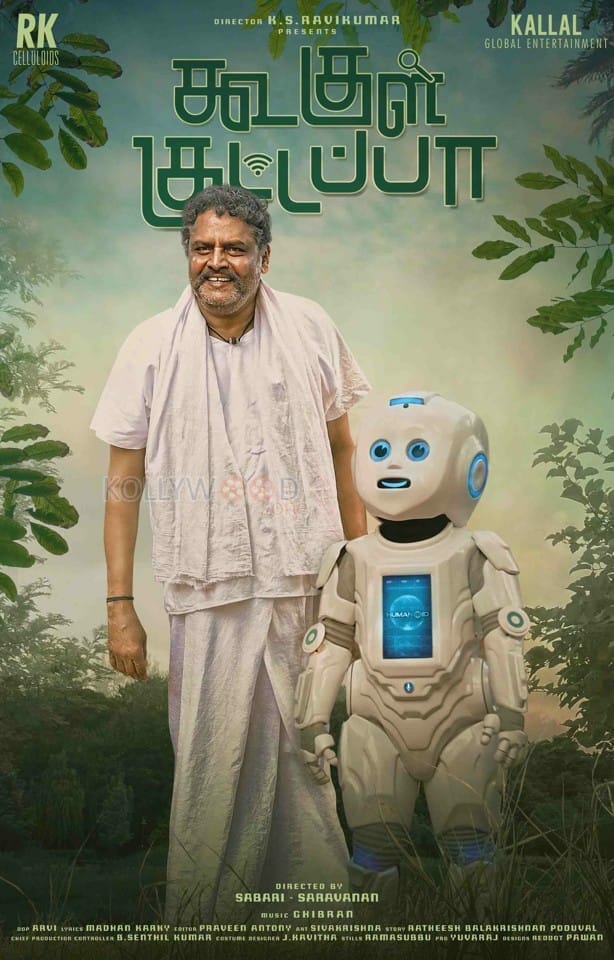 The movie follows the life of Subramani (K. S. Ravi Kumar). Koogle Kuttappa is set in the backdrop of a small village in Coimbatore. Subramani, a conservative ill-tempered old man who has lost his wife lives with his son Adithya (Tharshan Thiyagarajah), a robotics engineer. Adithya is ambitious, and has a desire to build a career abroad. Opportunity presents when he gets a job in a German robotics firm. After a tiff, Subramani reluctantly agrees for him to take the job. Adithya arranges for a caretaker to look after his father. Subramani’s bad tempered nature exacerbates after his son leaves him alone and goes for Germany. He vents out his frustration on the aids that tend to him. So, nobody sticks in the job for a longer period. Things get worse when he suffers a heart attack. Adithya is worried sick. Not knowing how to handle the situation, Adithya gets him a humanoid robot made by his company to caretaker of him.

Being a conservative he is, Subramani is irked by the robot. But as the robot fills the void of lack of company in his life, he grows fond of it. Gradually with time, he becomes acquainted with it, and begins to care for it. Soon he gets dangerously attached to it to the extent that he replaces it for his son. Realizing the condition, Adithya tries to get him to see what was happening to him. But Subramani is emotionally invested in the machine, and refuses to heed to his son. Will Adithya wake his father to reality, and convince his father that he is there to take care of him, is what makes the rest of the flick.

Actor Dhanush’s Power Paandi dissected the lives of aged people to convey that a person’s life is not over when they become old, and that they have the right to choose to build a new life that makes their life worth living. Koogle Kuttappa takes a step forward. It seeks to get a little deeper and depict the other facet of old age. With Koogle Kuttappa directors Sabari and Saravanan aim to explore a contemporary issue and an imperative state of a human life. The desire for company, and emotions that elderly people go through without it. Speculatively, this is the first time in the history of Tamil cinema we would be coming across such a plot line. Unlike Power Paandi where Paandi attempts to find company in his childhood love Poonthendral, here Subramani does not have any to go in search of to revive relations with, except for his son. So, what do a person do then?

A man finding comfort in a machine is an interesting knot to explore what the makers of the film intend. But as with most films of Tamil cinema, the lack of dexterity to put the pieces together in an engaging way has infected Koogle Kuttappa as well. The drama moves conveniently without reason, and for a good period deprived of logic. Another drawback is its attempt to simplify a complex human existence. While it talks in length about Subramani’s emotions and condition, it comfortably leaves out Adithya’s right to lead the life that he aspires to live. Towards the end, Koogle Kuttappa sends us home with the question – as to if one should give up on the dreams to be with their parents in their old age, or go after what their heart longs for – unanswered.

Actor K. S. Ravi Kumar has got under the skin of his character. He infuses life into Subramani. Actor Tharshan Thiyagarajah is straight-faced and unauthentic with his expressions. Looks like the actor has a lot to do to be able to play a lead role. Actress Losliya Mariyanesan suffers with her performance even in a role that demands so little of her. Comedians Yogi Babu, and Prankster Rahul do not live up to the purpose for being on board. Actor G. Marimuthu is as effective as usual. Actor Poovaiyar is full of vigor. Actor Suresh Chandra Menon is adequate. The rest of the cast has delivered what was asked of them.

On the technical front, musician Ghibran’s scores are disappointing. Even his background score does not add any value to the flick. Cinematographer Arvi’s visuals are below par and have a repelling effect on us. Editor Praveen Antony puts his editing expertise to full use to cut the shortcomings in the work of his colleague.

On the whole, K. S. Ravi Kumar’s Koogle Kuttappa has an interesting story line for a science fiction film but inept writing deflates it.