Only a handful of filmmakers have engraved a film making style for themselves in Tamil cinema. And indisputably director Mysskin is one among them. For people who have had the opportunity to catch his entire line of works would know that he likes to instill himself in every artist that depict a role in his films and as actress Aditi Rao Hydari stated he is someone who does not hesitate to show uncomfortable things on screen. Psycho is not an exception to it. In fact he has upped that quotient in Psycho with attempting to get to the perspective of a serial killer. Actor Udhayanidhi Stalin is back on screens after his dreary romantic drama Kanne Kalaimaane for whom Psycho will simply be the career best performance though he has only just managed to get under the skin of the character. 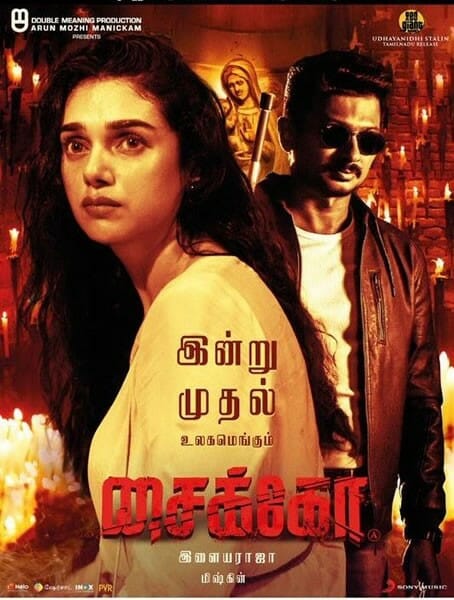 A ruthless serial killer named Anguli who has committed a string of gruesome murders in the city of Coimbatore is on the loose. Like all serial killers there is a definite pattern in the way he treats his victims who are only women. He chops off the head of his victims and collects them as he considers it as his trophies. He then displays their headless cadaver in abandoned areas. The callous murders have put the police department behind him. An investigating team led by Ram is on the hunt with no solid clue. Meanwhile, we have Gautham (Udhayanidhi Stalin), a wealthy musician who is visually impaired and is crazily in love with Dhalini (Aditi Rao Hydari), a radio jockey. At first she rejects him but Gautham who would not take no for an answer begins to stalk her with the help of his care taker (Singam Puli).

Dhalini looses patience with Gautham stalking her and insults him only to later realize that he is visually impaired. Then we know what happens the eventuality happens she falls for him but that is where the tragedy also happens in film maker Mysskin’s flicks. Dhalini challenges Gautham to track her the next day with the help of the hints that will be provided to him through her radio show in order to meet her, where she will be prepared to accept Gautham in to her life. The following day Gautham cracks the hints delivered in the show and reaches Dhalini. Yes, you guessed it right again. Just when he reaches the spot Anguli abducts Dhalini right in front of Gautham. Petrified of the incident he rushes to the police only to learn that they are still clueless about the killer.

Worried about what would happen of Dhalini every moment that passes he decides to take up the matter on his own hand. He seeks the assistance of Kamala Das (Nithya Menon), an intelligent former sub inspector who is confined to her wheelchair due to an incident that happened while she was on duty. Meanwhile, Anguli prepares himself to secure another trophy for his collection but is bewildered by the contrast emotion of a person who is at the verge of being hacked to death, when Dhalini smiles at him. She smiles and utters to him that Gautham will come for him. Anguli accepts and decides to wait for Gautham. Will Gautham find out where Dhalini is on time and save her from Anguli, and what will happen of Anguli, is what makes the rest of the flick.

Director Mysskin had earlier stated that the film is a blend of Ramayana and Bible seasoned over the popular tale of Gautama Buddha and Angulimala, a serial killer who went on to become one of the adherent followers of Gautama Buddha after indulging in a conversation with him. Precisely Psycho is the depiction of what he had stated and to put it in simple terms it is an out loud cry to be little considerate of Psychos or mentally and morally broken individuals which could open up a way to them coming back to normal. The premise that Mysskin chose to build his script on is unquestionably at Zen level but he falls short of establishing the point that he intended to deliver in an authentic way. His attempt to bring in compassion amidst blood and violence has gone amiss despite his poetic film making trying to lure us in.

Actor Udhayanidhi Stalin has delivered an okish performance and has failed to make use of the scope of the character to the maximum extent, though it is the less intricate lead character that the director has ever crafted. For some reasons I could not help myself from picturing actor Kamal Hassan playing Gautham. Actress Aditi Rao Hydari is the apt choice to depict the resilient and polite Dhalini. Actors Nithya Menon and Ram’s characterization have been undercooked. Something we are not used to in Mysskin’s films.

On the technical front, it is familiar that director Mysskin likes to talk with his visuals and cinematographer Tanveer Mir has beautifully given himself to the melancholic poetic flow of director Mysskin which is further made elegiac with the background scores of music maestro Ilaiyaraaja.

On the whole, with Psycho director Mysskin has attempted to explore a darker part of the world which not many film makers in Tamil cinema would dare to and his attempt deserves to be commended.