Surya’s most anticipated film of the year has finally hit the screens and unfortunately the flick turns out to be a patience tester. Right after the trailer release we had reported that the film is not in the zone of classic raw Selvaraghavan’s story telling style. Like said the film does not stand up to the standards of director Selvaraghavan. However, actor Surya makes his screen presence felt and thrives hard to infuse life in to a lifeless drama. 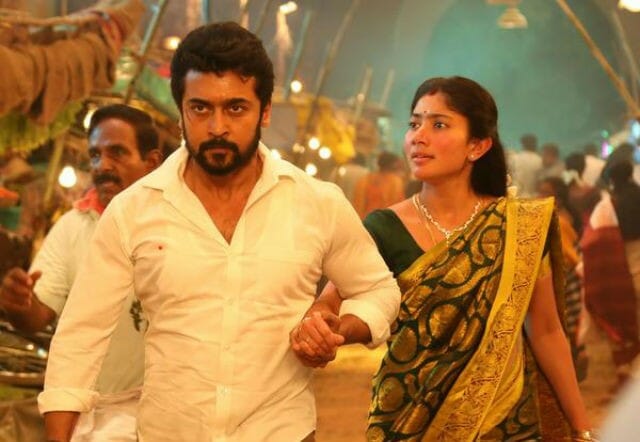 Nanda Gopalan Kumaran (Surya) a normal youngster and an environmental engineering graduate decides to quit his mundane job to pursue his passion of setting up an organic farm. He is also a person who is very much agitated by the extent of corruption in his country. Youngsters in the neighborhood joins NGK in his vision of setting up an organic farm. This does not incite a good reaction among the local politicians. Things are not as smooth as NGK expected it to be and it further worsens when he gets in to a squabble with the local vegetable traders. NGK realizes that without power it is difficult to bring about a change in the society and that corrupt politicians are the biggest hindrance to growth. So in order to clean up the mess in the political system he joins a political party straight away as an assistant to a local MLA (Ilavarasu).

From the grass root level Surya climbs up the political ladder by following devious methods to finally become a big threat to the very same political party’s chief. Now everybody he double crossed are after him and his family, will he be able to protect them, or did he manage to get the power he desired, is what makes up the rest of the story.

Surya begins as an epitome of mass in Tamil cinema, there is no asking about how the actor has performed. He makes us feel his screen presence and fights till the last to hold the film together only to be miserably letdown by poor writing. Did we just forget to mention about the two heroines in the film? Believe us it is only fair from our side as you rarely feel them in the film. Malar fame actress Sai Pallavi as NGK’s wife Geeta is a horrible misfit in the film and it is quite disheartening to state that her performance was very artificial. Rakul Preet Singh who plays Vanathi, a public relation strategist desperately tries to be an important character in the film but fails to convince us that she is. Even artists like Ponvannan and Devaraj have delivered a below average performance.

Selvaraghavan is known for his portrayal of ground reality and the depth of his character’s characterization, especially of the female leads in his films. But in NGK except the half baked Surya’s character rest of the characters in the film totally lacks depth. Also, the writing seems to be very ordinary like that of the commercial directors of Kollywood, the essence of Selvaraghavan is totally missing in NGK which is one of the main reasons for the collapse of the film. Either, be it the portrayal of scenes to justify Surya’s rise to power among the ranks of his party or the justification of NGK’s extra marital affair with his public relation strategist Vanathi, Selvaraghavan has failed to produce his authenticity or maybe washed it down the bay in order to please the mass image of the actor.

On the whole, NGK seems to be fallen out from the pens of a commercial writer and the absence of Selvaraghavan’s magic in the film has sunk one of the most anticipated films of the year.