Vil Ambu is yet another unconventional cinema which is a new attempt by Ramesh Subramaniem. As Director Suseenthiran produced this project, expectations were high for this venture. The first look was released by Kajal Aggarwal and other prominent celebrites. So has the movie kept those expectations? Let’s see. Usually when a movie has two actors the story will be penend in such a way they meet each other at some point of time. Or one of them will be an antagonist. But here Ramesh Subramaniam has decided something new. 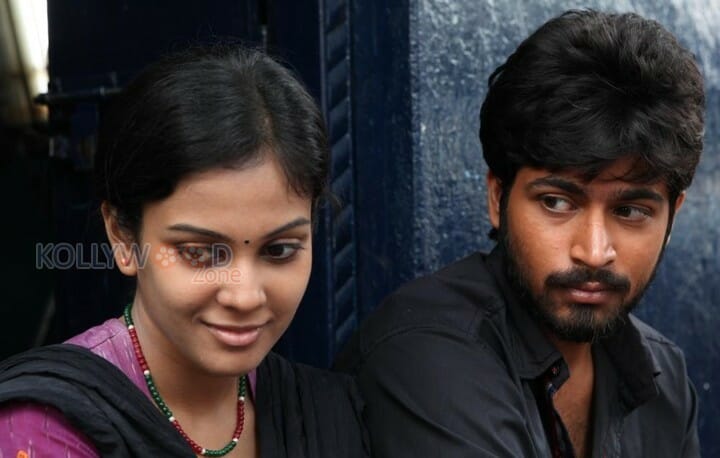 The lead actors Sri and Harish Kalyan never meets each other, but still their lives are interconnected. Sri is a local rowdy who gets into fight all time. Harish is a passionate photographer who goes to IT industry as he couldn’t withstand pressure from his parents. And there comes a moment when the lead protagonists get to know each other. It was a perfect nail biter. Finally they join hands to defeat the villain who brought them all troubles. Director Ramesh Subramaniam has failed to deliver the screenplay.

The writing and narration was good. But he was lost somewhere and the core plot itself was left at stake. There are three female leads and all have done justice to the roles. Chandini alone has some space to score. Srushti Dange is just a ‘Hit and Miss’ role. Coming to performances, Harish Kalyan and Sri have proved their acting skills. Especially Sri fits the bill.

Ruben’s cuts are a positive aspect. He has given a racy movie. None of the scenes were too draggy. Background score has been good too. Navin has worked a lot on the movie. Ramesh Subramaniem should have worked a little more on the core plot. It was like he deviated completely from the central theme. Even the twists and turns take a fall as the plot was missing after some time.

Overall. ‘Vil Ambu’ can be watched once for its freshness.