Jil Jung Juk is clearly an over hyped movie in recent times. Thanks to the promotions and First look posters. Siddharth who recently tasted success in ‘Aranmanai 2‘ is back with an offbeat entertainer. Along with him, he also has Avinash and Sananth in parallel lead roles. The movie as touted, was a black comedy genre. Siddharth as Nanjil Shivaji (Jil), Avinash Raghudevan as Jungulingam (Jung), Sananth Reddy as Jaguar Jagan (Juck) were assigned a simple task of transferring cocaine. But they were caught by opponent gang and there they face few more troubles. 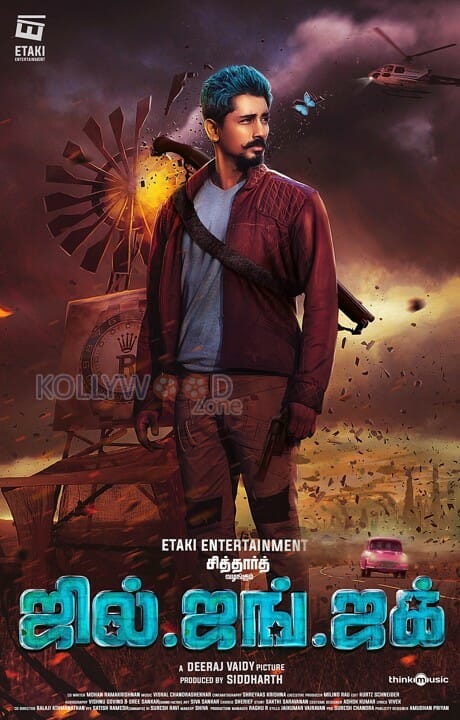 What happens next forms an interesting journey filled with dark humour. It is clear, that the movie targets youth audience. The lead characters are the backbone of the movie. Their facial expressions itself lighten up the whole screen. RJ Balaji appears for few minutes. But still he makes an impact. Veteran actors Radharavi and Naasar prove their mettle. Siddharth proves his versatility once again after getting a small role in ‘Aranmanai 2’. As we said, the dialogues are filled with profanity and they target youth audience.

Cinematography is the biggest strength. The tone sets a mood and the colour shades used by Shreyaas Krishna is just ‘WoW’. Editing is the biggest disappointment. That pulls the movie down. Kurtz Schneider should have chopped the movie further and keep the movie’s running time on check.Second half is so draggy. Vishal Chandrasekar’s music already got its response. The famous ‘Shoot the Kuruvi’ just appears by climax.

Background score music for action scenes are fantabulous. Production values are also high. The witty one liners are the biggest highlight of the movie. ‘Hara Hara Mahadevaki’ is one of the best example. Overall, debutante Deeraj Vaidy has executed a solid script with a poor editing.The movie might slowly pick up in ‘A’ centers. But we can’t expect the same from ‘B’ and ‘C’ centers too.