First things first- For an actor to take ‘Seethakaathi as his 25th project involves a lot of guts and it proves that Vijay Sethupathi is surely distinct from your common Tamil actors. The movie doesn’t involve his usual antics. What we witness is an old man living his life on screen. The accessories, makeup, and costumes are a plus to Vijay Sethupathi in his endeavor. 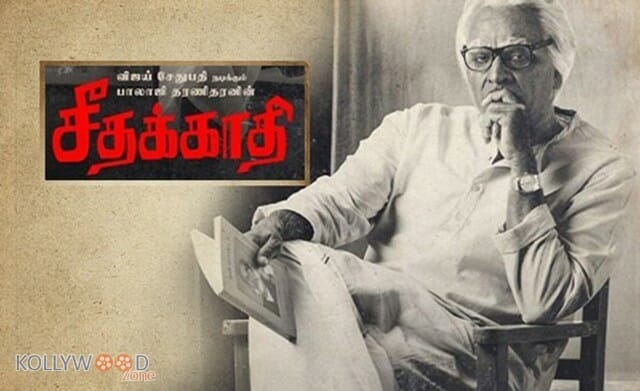 The versatile actor stars as Ayya Aadhimoolam, a seasoned septuagenarian drama actor who has a good amount of respect in Tamil society. Ayya is someone who prefers stage acting than film roles. Over the years of his career, the popularity for theater plays dwindles, but he still continues his passion with immense dignity.

The first 40 minutes of the film throws limelight on Ayya in a very clear and detailed manner. The core concept of the director is in the fantasy and paranormal zone. We get charmed slowly, and then the craziness begins. Thanks to the incredibly talented bunch of stars like debutante Sunil (Actor Vaibhav’s brother), Rajkumar, and Balaji he succeeded in his innovative attempt.

Sunil pulls of a tricky debut performance with great conviction. He supports the complete 2nd half of the film along with extended cameos of Director Deekay, Karunakaran, Director Mahendran, and GM Sundar. Deekay and Mahendran shines in their respective roles and add value to the story. Seasoned director-actor Mouli has a pivotal role throughout the storyline.

Bagavathi Perumal also excels with Rajkumar in one stunning scene in a park where we can witness different types of emotions and elements. A few actresses appear in the film with brief cameo roles and it’s only Ramya Nambeesan who made some impact in the screen.

The music director Govind Vasantha has composed some fantastic tunes after his success in ‘96’. His background score is the heart of the movie, which also raises our viewing experience.  The songs like ‘Avan’ and ‘Ayya’ gel with the movie while a few of his theme music are literally ecstatic. The movie would’ve been incomplete without his music.

‘Seethakaathi’ isn’t without its drawbacks. The starting 400 minutes has to be viewed with a good amount of patience. The total run time of the film is 2 hours 53 minutes which could’ve been reduced easily. Some of the scenes about Tamil cinema have been shown exaggeratedly.

On the whole, ‘Seethakaathi’ is another brilliant work of Director Balaji Tharaneetharan who is known for his unique, original concepts. His movie is filled with emotions and fun. Give it a try, if you a buff of good cinema.