The film narrates the battle of a mother to shield her ill son by holding on to his oxygen cylinder inside a bus that has crashed into a tunnel, with passengers of different kinds trying to survive with the oxygen level reducing. Actress Nayanthara continues to juggle successfully between playing the leading lady of star actors and shouldering projects on her own as the lead. The actress who was last seen in the romedy drama Kaathuvaakula Rendu Kaadhal is back on screens with her survival thriller drama O2. Film maker G. S. Viknesh has helmed the flick. So, how has the survival thriller O2 come out? Will it help continue actress Nayanthara’s string of doing female centric movies by retaining the image of a bankable lead heroine? To know that let us get in to the movie review. 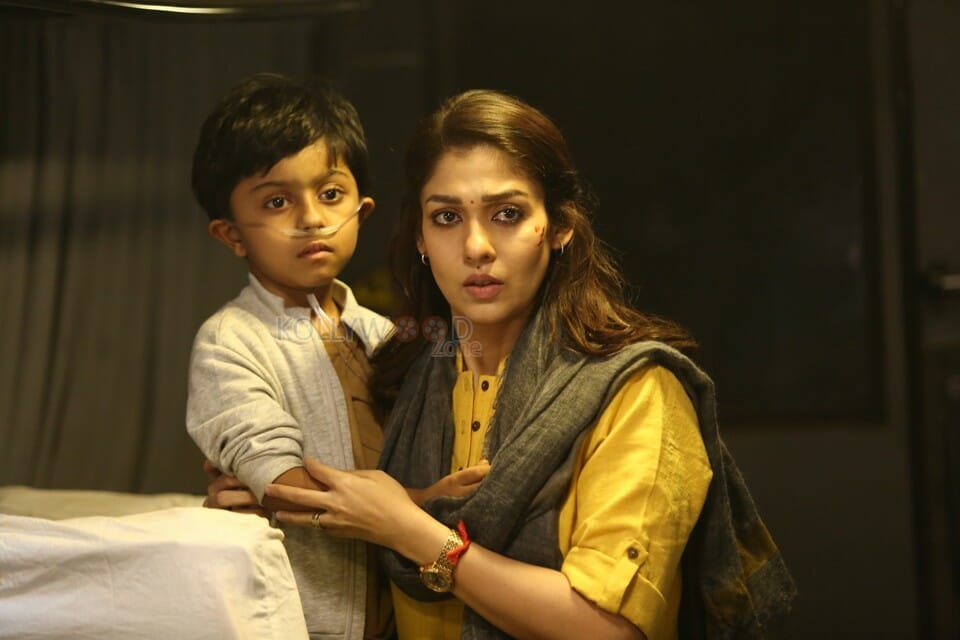 The film is set at the backdrop of Coimbatore, it follows the lives of Parvathy (Nayanthara), a botanist and a doting mother, who, like any mother, would go to any extend to keep her son Veera (Rithvik) from harm’s way. O2 opens with Parvathy delivering a speech through a video conference on the necessity to protect nature to make human existence sustainable. Nature is brutal when threatened, says Parvathy. Veera suffers from cystic fibrosis, a hereditary condition that makes breathing very problematic. To make breathing easy Veera always needs an oxygen cylinder by his side. Parvathy is worried sick about the condition of her son, and could not stand seeing him torment. She finds a reputed medical institution in Kochi to treat her son through her brother. She decides to take him there, and arranges for a surgery. Parvathy boards a bus with Veera from Coimbatore to Kochi.

On their way, in Palakkad, they get caught in heavy traffic. So, the driver takes a different route. In an unfortunate turn of events, they meet with a terrible accident resulting from a landslide. The driver loses control and the bus runs into a trench. It does not take long for the passengers inside to realize that the oxygen level is depleting. As time passes the passengers become impatient and their attention inevitably falls on Veera’s oxygen cylinder. Few of them try to overpower Parvathy to get to the oxygen cylinder. Now, it is up to Parvathy to fend their advancement to keep her son safe. Will Parvathy be able to resist the individuals who try to take away the cylinder, and will help come in before it is too late, is what makes the rest of the movie.

Making a survival thriller is harder. Confining the plot to a small space for the most part, makes it even harder. The restrictive environment creates difficulties in holding the attention of the audience. One needs to be quite creative to be able to do so. It is this factor that devitalizes a potent O2. But to give credit where it is due, director G. S. Viknesh has made efforts to make the flow of the drama as engaging as possible. To be able to do that he plants several characters in the form of co-passengers, and works on their characterization to infuse conflict. For instance, we have the helpless driver, a scared politician, and a callous cop who would not think twice to even kill people for his survival. These characters bring in the tension and keep us hooked. The events staged to draw out the conflicts are done efficiently.

As time trims, at the verge of demise, the character’s behavior starts to get shady as everyone wants to put themselves first. This transition had a wide possibility to capture the psychological aspects of human beings when their survival is at stake. But director G. S. Viknesh’s writing is not creative enough to do that. He rather gets past the scenario on a shallow level. The problem with O2 is that as the film proceeds the film gradually starts to lose stream, and begins to test our patience. Since the character arc of the characters are not deeply rooted, their behavioral transformation does not seem organic. At that point O2 loses even the little attention it had of the audience.

Actress Nayanthara who usually shoulders her films is disappointing as Parvathy. She is repetitive with her expressions and overplays her part to demonstrate the tension in the proceedings. The poor characterization of his role confines child artist Rithvik, not giving him space to perform. Actor Barath Neelakantan is adequate. Actor R. N. R. Manohar lives up to his role. Actor Aadukalam Murugadoss is operational. Actress Lena is effective as usual. Actor Sha Ra makes his presence felt even in a short screen time. The rest of the cast has delivered what was asked of them.

On the technical front, music director Vishal Chandrasekar’s tracks are not inspiring. But he makes up for it with his chilling background score. There are many complexities in covering a drama that transpires within a small space for its most part. Cinematographer Thamizh A. Azhagan has kept his camera at the best angles to cover the drama. Editor Selva R. K has put his scissor at the right spot to compliment the work of his colleague.

O2 is available for streaming on Disney + Hotstar OTT platform.