Every year at least one school or college drama gets made in Tamil cinema that takes us on a trip down our memory lane. Mid of this year, we had actor Sivakarthikeyan’s Don, and now we have a web series titled Meme Boys to take us on the trip. The series tells the tale of a bunch of college students who by means of creative memes condemn the atrocities carried out by their autocratic college administration. Actor Aadhitya Baaskar who was last seen in a short in the anthology drama Paava Kadhaigal is back on screens with the comedy series Meme Boys. Actress Namritha has essayed the female lead role. Actor Guru Somasundaram has played a crucial part. Director Arun Koushik has helmed the web series. Writers Rajiv Rajaram and Drishya have penned the series. So, how has the series come out? Is it solid enough to propel actor Aadhitya Baaskar as a bankable lead hero of Tamil cinema? To know that let us get into the series review. 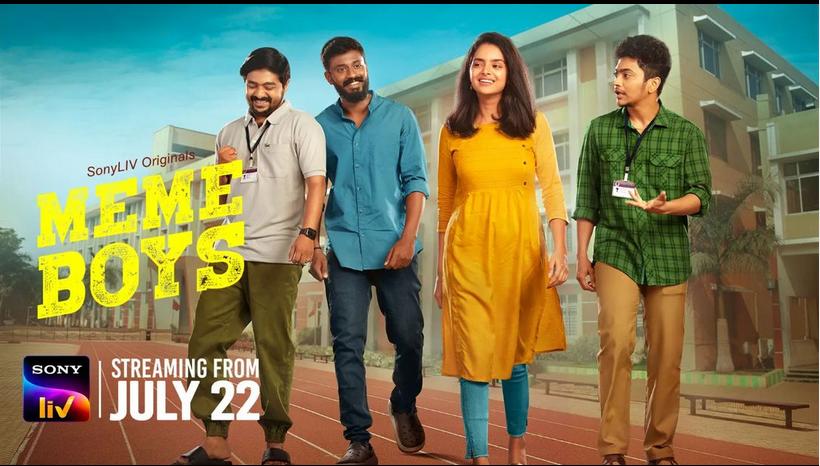 The series revolves around Mohan Jothi Babu aka Mojo (Aadhitya Baaskar), a carefree college student and his gang of friends Karthik (Siddharth Babu), Srikumar (Jayanth), and Julie (Namritha). Meme Boys opens with four college students being apprehended by cops in the college campus while the entire student community watches in shock. There crime, you ask? No, brownie points for guessing. For creating memes. They are the admins of a popular Instagram page named Meme Boys which posts memes making fun of the authoritarian policies of their college. Then we are presented with a flashback, where we see Mojo preparing to take part in a meme contest which has a lucrative reward for the title winner. He approaches his friend Karthik to be his partner. It does not take long for his other friends Srikumar, and Julie to join them. What starts off as a meme contest soon leads to the creation of an Instagram page under the name Meme Boys.

Casually they begin to post memes making fun of the rules, punishments, and the way the institution treats its students. The memes go viral, and soon the page becomes quite popular among the students. This puts pressure on the college management, and their dean Narayanan (Guru Somasundaram). Along with his deputy Kathiresan (Badava Gopi), Narayanan devises various schemes to identify the persons running the page, and put an end to it. But all his efforts turn futile. As a final attempt he opts for a drastic measure. What will happen to the students, and will the issue be solved amicably, is what makes the rest of the flick.

Meme Boys is targeted at the present generation. The idea of the series is to use the powerful tool of this generation ‘Memes’ and create entertaining content for the audience. For decades, Tamil cinema has taught us, and reinforced the notion so hard that people literally go to college to either fall in love, or teach their college administration a lesson without facing any repercussions. As if literally, there is nothing else better to do in a college campus. Defying the longstanding notion, Meme Boys has its entire focus on its concept and keeps things light, and sees to it that there is no unnecessary overflow of emotions. What is even more interesting in Meme Boys is it unfolds entirely in the college campus yet it is dearth of romance. Path breaking indeed!

Director Arun Koushik’s Meme Boys has nothing fancy to win the attention of the audience. The strength of the series is its prowess to present simple events in creative ways. For instance, be it the sequence where the dean cuts off the campus WI-FI, or where he desperately brings people to hack into the network to scrap the page. Portions like these are well thought out and penned in a way that makes space to play a comedy. Writers Rajiv Rajaram and Drishya have a flair for writing comedy. It is their writing that largely keeps us invested in otherwise a tad banal flow. Knowing the simplistic nature of the plot and limiting the series to eight episodes before it gets sluggish has done the series a lot of good.

Actor Aadhitya Baaskar is natural and pulls off his part effortlessly. He exhibits potential conveying that he can shoulder a film on his own. Actress Namritha does complete justice to her role. Actor Guru Somasundaram is impressive as a stern dean. It is hard to think of any other actor (Prakash Raj, maybe) to play the role to such perfection. It is always a delight to watch him perform. Actor Jayanth is functional. Actor Siddharth Babu does his part well. Actress Devadharshini Balamurugan with an effective performance as usual. Actor Badava Gopi for his part augments the comical quotient of the series. He makes his presence felt. Though irksome at times. Actor Nikhil Nair is adequate. Actress Latha Venkatraman lives up to her part. The rest of the cast has delivered what was asked of them.

On the technical front, music director Gopal Rao’s bit tracks add value to the series. His background score aids in enhancing the comical portions. Cinematographer Jagadeesh Sundaramoorthy has done a fine job in capturing the series giving us the campus vibe raw. Even the color and angles deployed are good. Editor Rahul Raj’s sharp scissor work has complemented the work of his colleague well.

On the whole, director Arun Koushik’s Meme Boys is a light hearted campus drama that is inconsistently entertaining. But it is still worth a watch.