After completing over a decade in the industry, actor Arulnithi has earned the trademark as a thriller film hero. With his filmography in mind, it would not be a wild guess to take, that it is either a horror or crime thriller film the moment we see his name on the posters. If you had made that guess on Dejavu, voila, you are not wrong. The film tells the tale of a crime novelist whose fictional writings begin to transpire in real life causing problems to people. Actor Arulnithi who was last seen in the coming-of-age psychological drama D Block is back on screens with his mystery thriller flick Dejavu. Veteran actress Madhoo has played a vital supporting role. Debutant director Arvindh Srinivasan has directed the movie. So, how has the mystery thriller drama Dejavu come out? Will it help put actor Arulnithi back on the winning zone and reinstate his image of a bankable lead hero in Tamil cinema? To know that let us get into the movie review. 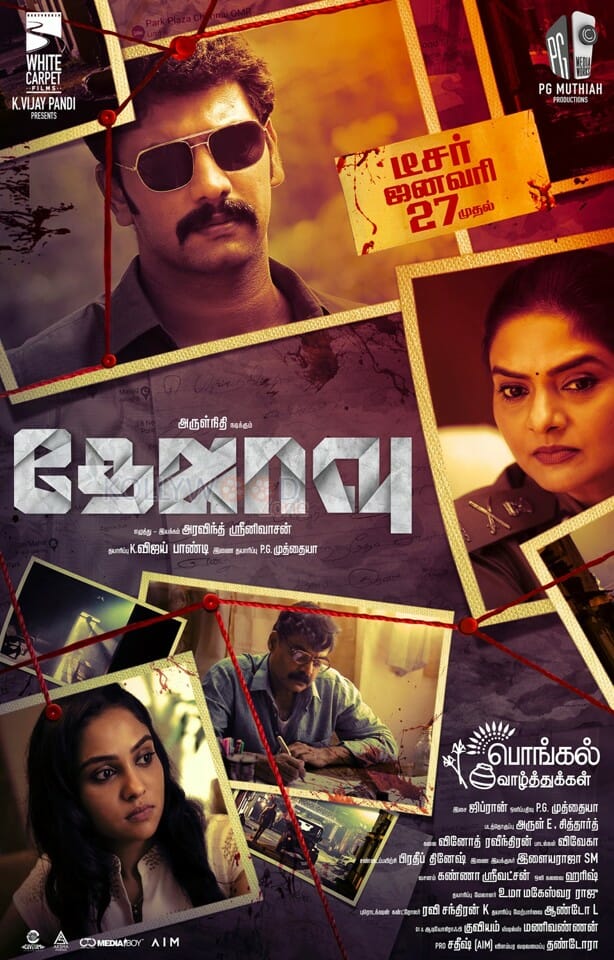 The entertainer is set at a weird backdrop where novelist Subramani’s (Achyuth Kumar) fictional writings transpire into reality. Dejavu opens with an inebriated Subramani experiencing the fictional characters he had written in his previous novel come into his life, and pose a threat to him. He rushes to the police station to make a complaint. Seeing his tipsy state, the cops do not take him seriously. He goes back to home and begins to pen a scene about a girl getting abducted. The very next day the scene happens in real life. A woman calls the police station and informs them that Subramani has a hand in her kidnapping.

The cops take Subramani under their custody. Shortly after his arrest, Pooja (Smruthi Venkat), the daughter of DGP Asha Pramod (Madhoo) goes missing. Fearing her personal connection could cloud her judgment, DGP Asha Pramod unofficially assigns the case to ACP Vikram Kumar (Arulnithi). Vikram Kumar takes charge and goes undercover to begin his investigation. To his surprise Subramani pens every move of his precisely as if he had already lived that moment. Who is Subramani, how do the events he writes transpire to reality, does he have any connection to the kidnappings, and will Vikram Kumar unearth the mystery behind this puzzle, is what makes the rest of the flick.

For starters, the way Dejavu begins is an ideal way to begin a mystery thriller. A writer claiming that his fictional characters are disturbing him in real life. This, though weird, takes us by surprise and grabs our complete attention. Debutant film maker Arvindh Srinivasan quickly backs the element of surprise by building a crime around it. The groundwork to raise a solid crime thriller is laid right. Just when we get set for a towering high rise building to be built up on it, all we see is the construction of a shaky structure. Everything unravels with ease for the protagonist after a sake-of-it setback. He does not have to break a sweat to get past the confrontations he faces to crack the case. The logical loopholes in the plot are another set of wrong stones in the brick work that upset the structural flow. But the mystery anchor prompts us to neglect the loopholes.

In order to keep the audience hooked, director Arvindh Srinivasan frames a series of twists at regular intervals. Sadly, we the audience without much work are able to sense the intent to deceive behind the twists. To place these twists new events that are irrelevant to the plot are written. Since the purpose of these events itself fails, they end up just stretching the film’s run time. Despite flaws, debutant film maker Arvindh Srinivasan built a screenplay that at least inconsistently kept us invested. But what completes a crime thriller? The startling climax. That is where Dejavu crumbles down like a house of cards. The moment the mystery is let loose, all the efforts put in to carve the path to the final show, go in vain. Suddenly, the logical loopholes that we chose to overlook, seem inexcusable. And Dejavu sent us home with oozing dissatisfaction.

Actor Arulnithi, in a way, has been consistent with his performance. The same expressions, reactions, gestures, and emotional quotient film after film that we are so used to. It is high time the actor works on them to become a better performer. Nothing special comes off of veteran actress Madhoo but she lives up to her role. Actor Achyuth Kumar, yet again is impressive with his performance. Actress Smruthi Venkat has done justice to her part. Actor Kaali Venkat is exceptional as usual. Actress Maria Vincent serves the purpose for the reason why she was roped in. Actors Mime Gopi, Ragav Vijay, Chetan, Supergood Subramani, and Yalini Rajan have all chipped in and have played their part well. The rest of the cast has delivered what was asked of them.

On the technical front, music director Ghibran’s tracks are not good but are not really bad either. His background score adds value to the film. Cinematographer P. G. Muthiah has covered the drama from the best vantage points possible. His visuals aid in setting the mysterious tone of the flick. Editor Arul E Siddharth has put his scissors at the right spots to trim out the junk clips enhancing the work of his colleague.

On the whole, debutant director Arvindh Srinivasan’s Dejavu has an interesting idea but not the able craftsman to turn that idea into a displayable effigy.

Is There A Naane Varuven Vs Ponniyin Selvan Clash On The Cards?

Jai To Play A Vital Role In Rajinikanth’s Jailer With Nelson Dilipkumar?