Ayogya saw the day light after a day long battle only to turn out to be an ordinary cop action film, if not for its climax. The drama that occurred for the release of the film seems to be more intriguing than the actual charade drama.

Karnan (Vishal) an unrepentant insane corrupt cop is transferred from Chennai to Thoothukudi under the recommendation of Kalirajan (Parthiban) an evil gangster with all sorts of anti social activates has built an empire for himself in the city with the assistance of his brothers. By knowing Karnan’s love for money Kalirajan initiates the move with plans to have him as a shield of protection for his illegal businesses. While everything seems to go as planned for Kalirajan, the brothers go beyond the limit zone in anti social activity border to commit an unpardonable felony that changes the course of path of the corrupt inspector. The incident leads to the character leap, and the corrupt cop becomes a justice ravenous cop who wants to settle scores on behalf of the victim. Did and if so, how the cop succeeded in his attempt to instate justice for the victim, is what makes the rest of the story. 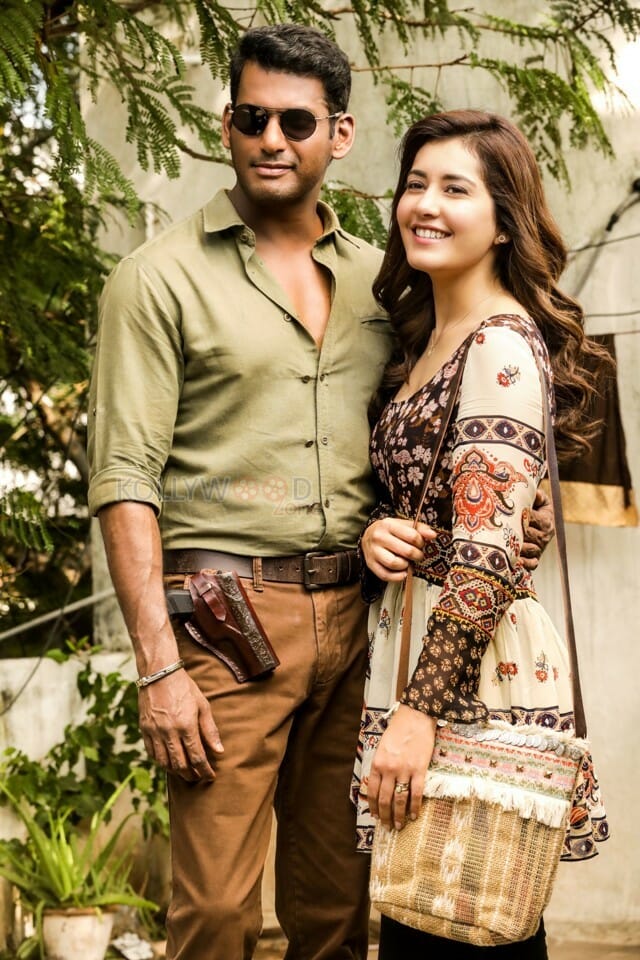 Actor Vishal makes his screen presence felt and his stout physique has allowed him to carry himself well as a cop on screens. Never like, in his previous films, the actor shines on screen when he is on Khaki uniform with his clean and neat appearance. Parthiban looks as a born criminal in the role and in scenes where the actors go against each other with dialogues seems like a better love story than the actual love story of Vishal and Raashi Khanna in the film.

Like most of the films actress Raashi Khanna comes in as a covering role with nothing much to offer except her bubbly charm to the audience. What is more outrageous is, Ayogya which claims to heavily condemn crimes against women on one side, objectifies women on the other side with an item number performed by Sana Khan.

Comedians Yogi Babu and Santhana Bharathi have managed to make the audience laugh in the allotted screen space. Veteran director K. S. Ravikumar pulls of an interesting character of a righteous cop with ease in the film.

Technical wise, the color tone of the film look so fresh and neat throughout the film in the dark as well in light. Cinematographer VI Karthik deservers a mention as his camera has framed some awesome scenic backgrounds with awesomeness, especially in the song sequences. The background score of Sam C. S, particularly on the powerful stunt sequences had added strengths to the film.

On the whole, the film appears to have been directed by the actor himself rather than the first timer Venkat Mohan as the flick desperately makes attempts to depict the good nature of the actor though he plays a seedy cop and tries to force a mass image for the actor on audience. It has become habitual for the actors in Kollywood to mix real life with reel life and use the powerful entertainment medium for their own personal gains. If not for the major lateral thinking in the climax, the one that Temper and Simmba do not have, Ayogya would have been a lackluster ordinary cop template film that the Kollywood audience is quite used to.