‘Echarikkai – Idhu Manithargal Nadamadum Idam‘ is a story about two men who kidnap the daughter of a rich millionaire and the helpless father approaches the help of a retired cop to track down the missing woman. Director Sarjun who is known for the controversial short film ‘Lakshmi’ gives due credits to the original British Thriller ‘The Disappearance of Alice Creed’ in 2009 and he just uses that as a jumping point. 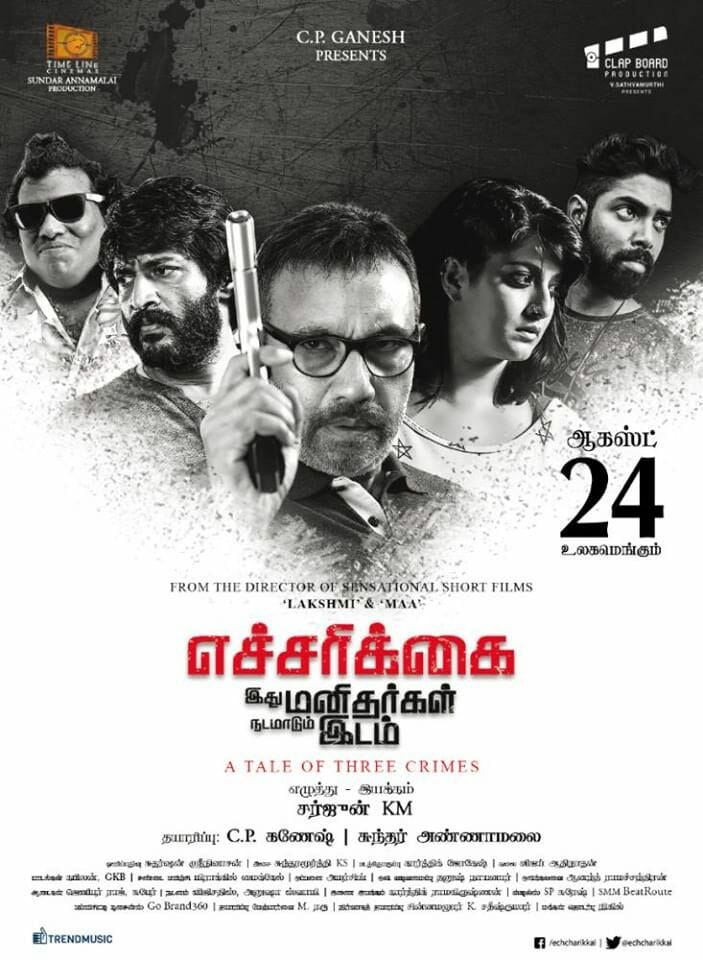 Two men kidnap a young woman and one of the men even has a connection to the girl. But they both hope for a ransom. David (Kishore) and his nephew Thomas (Vivek Rajgopal) are the two men and they kidnap Shweta (Varalaxmi), who is the daughter of real estate developer Perumal (Jayakumar) The movie even has a double-cross and we don’t want to spill the beans and spoil the suspense further.

Natraj (Sathyaraj) is a retired cop and he has his own problem as his daughter Piya has a rare medical situation and she requires constant care. So he is unable to leave home and he sets up a command center at his home and he starts working on the case.

The movie is engaging with the cat-and-mouse game between the police and the accused. The movie also has an emotional angle to David and Thomas. The movie moves at a brisk pace in the first half and it falters in the latter half. The tension goes missing in the second half and we also have unnecessary duet song and forced comedy with Yogi Babu which spoils the flow of the story totally.

The climax is also too weak as it wasn’t executed properly. Yogi Babu’s addition is just a marketing tool and nothing else. The movie doesn’t have anything else extraordinary and due to a sluggish second half, this movie becomes a DVD material. Sarjun already is working on his next with Nayantara and we hope he comes back stronger with Lady Super Star in his pocket!

Overall, a Half-Baked Thriller which is spoiled due to forced commercial stuff