A year ago, who would have thought or at least dreamt we would be doing and witnessing some of the stuffs that have turned out to be an everyday part of our lives. The pandemic have totally ravaged normality and regularity. Its impact was also felt in Tamil cinema with theaters suffering massive loss of income. In an attempt to channel income flow in the theaters, amidst mixed opinions finally Master has hit the screens. Just like our real world even actor Vijay’s style of film has undergone a little hard to believe transformation. Of course, the film enfolds must have elements of Vijay films like giving an omnipotent image to the star, trusted social message, and the fiery punch dialogues. But unlike other Vijay films, in Master, the actor has diluted that tone a bit and has opened up a different side – a side which seems promising for Tamil cinema. So how has the new styled Vijay film come up? To know let us get in to the review. 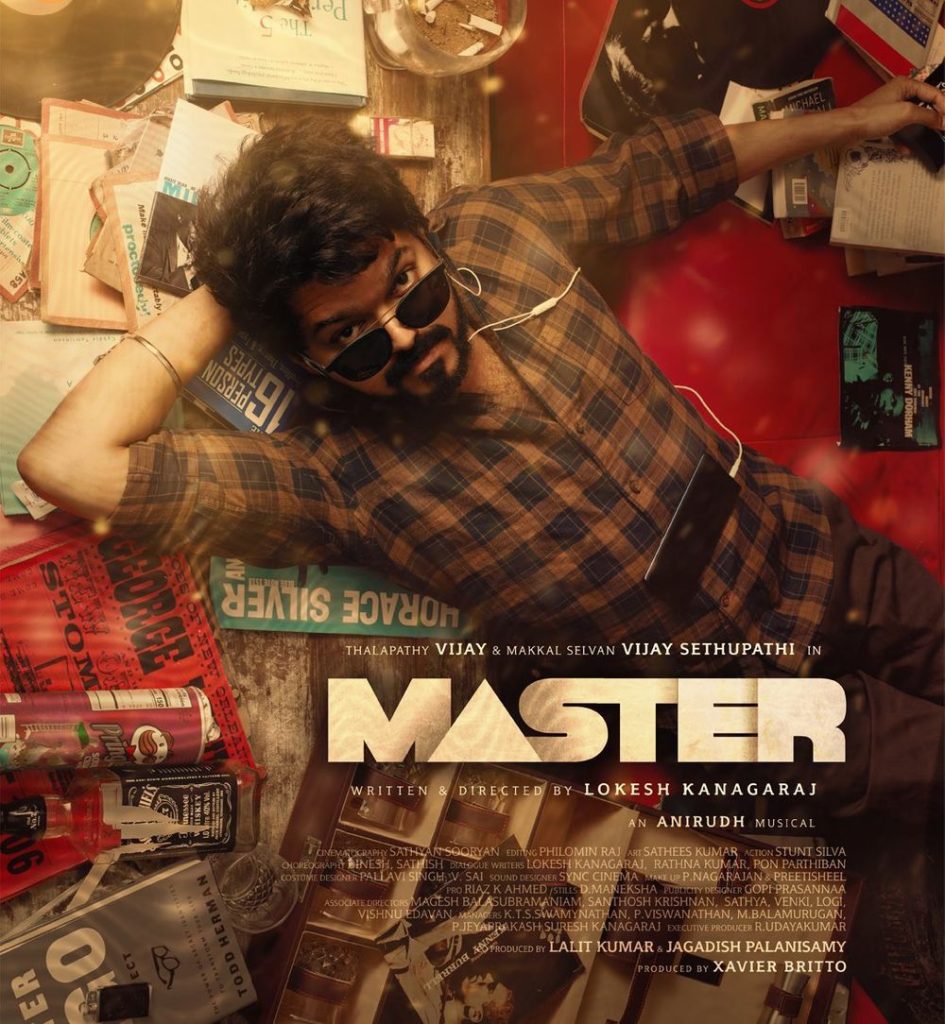 Master opens with setting the stage for the antagonist Bhavani (Vijay Sethupathi). As a child he witnesses his father and mother being murdered. Later he is sent to a juvenile observation and protection centre where he experiences gruesome events as a child. His childhood trauma turns him in to a coldblooded monster. As every crime boss he enters the world of crime at a very young age and builds and runs a big organized criminal empire. He exploits the youngsters in the recreational centre for his criminal network and hacks the ones to death who refuses to play along to his will. When the stage is set what is next? Yeah, you got that right! We have the much awaited intro of JD aka John Durairaj (Vijay), an alcoholic professor (when was the last time we witnessed the hero with moral flaws in a Vijay’s flick) who has his alcohol filled hip flask with him all the time.

He works as a psychology professor in a college at Chennai who plays by his own rules. This trait makes him popular among the students, and naturally puts him against the management. Meanwhile, inter college elections are declared. In unfortunate, turn of events violence breaks during the elections. JD steps in and gives an assurance to the management that he will keep things under control. But he fails to do so and his failed assignment forces him to accept his appointment as a professor to a juvenile observation and protection centre – a centre where Bhavani calls the shots. In the centre, Bhavani comes to the attention of JD but still he takes the path of non violence. However, a horrendous incident changes his mind and he decides to take on Bhavani. It is the start of the battle between the good and evil. Who triumphs whom is what makes the rest of the flick.

Honestly director Lokesh Kanagaraj’s Master is not up to the standards of his previous ventures such as Maanagaram or Kaithi. But there is something special about Master. Generally, in a Vijay film all you see is the star himself, the unreasonable mass elements, and breaking henchmen’s bones for fun. In Master the usage of unreasonable mass factors seems to have been deliberately mitigated. There is space for different characters to come in and establish themselves which is so unlikely for a Vijay’s flick. Other characters do not always wait for the star to come to save them. They are allowed to stand up for themselves. It is enjoyable to watch the fresh trend of actor Vijay. On the slight down side, the flick is lengthy and starts with slow pace. But when the stage is set for hero and villain to battle it out, it becomes an out and out Vijay movie.

Actor Vijay as usual delivers a power packed performance for his aficionados to feast on. There is visual treat for his fans who loves to see him in a different style in every entertainer. The actor also seems to have shaped up his physique as well. As anticipated Vijay Sethupathi’s antagonist role gets a powerful and menacing characterization. And the star pulls of the role with ease by his natural performance. Man of the moment, Arjun Das makes his presence felt even in the limited screen time. On the down side, it is disappointing to see actors Malavika Mohanan, Andrea Jeremiah, Nassar, Sanjeev, Srinath, Sriman, Shanthanu Bhagyaraj, Mahanadi Shankar, Gouri G Kishan, and Ramya Subramanian have nothing to offer other than a cameo. But it is discernable with two powerhouse performers in the running time of 3 hours.

On the technical front, music director Anirudh Ravichander’s tracks have already entered the playlist of many. His BGM’s have elevated the mood of the mass action scenes. Cinematographer Sathyan Sooryan’s frames have covered the super stars from all possible angles. His work is a visual treat. Editor Philomin Raj has added flavors with his trims to the works of his colleague.

On the whole, Master has its own flaws but despite it, actors Vijay and Vijay Sethupathi makes it entertaining to watch.