Black Ticket Films has made the production for another love story ‘Meendum Oru Kadhal Kadhai‘, which is a remake of Malayalam hit movie ‘Thattathin Marayathu’. Mithran Jawahar has written and directed the movie, which features Isha Talwar, Nassar and Walter Philips have played the lead roles. GV. Prakash Kumar has composed the music for this flick. 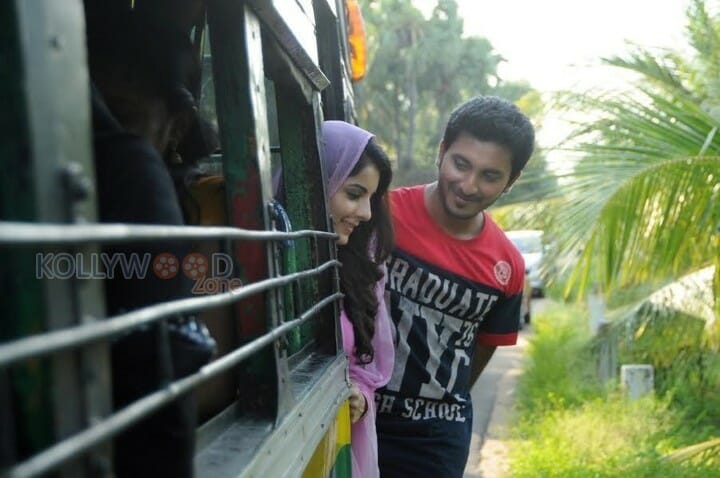 The background score is by Shaan Rahman. Vishnu Sharma has made the cinematography work and the editing part was played by Thiyagarajan. The flick is purely a love story between a Hindu boy and a Muslim girl and they face many problems and whether they join hands or not are the rest of the movie. It was a highly successful movie in Malayalam and we have to wait and see whether the movie gains good collections.

The first half of the movie is full of endless songs where the hero sings many songs chasing the heroine. The hero’s name is Vinoth and the heroine Isha has enacted as Ayesha and Nassar has acted as Ayesha’a uncle, where his posing is awesome. Vishnu Sharma has shown a beautiful picture through his indigenous camera work and the editing work is also neat.

Walter Philips and Isha have done a decent job and their posing is amazing. Actors like Arjunan, Thalaivasal Vijay and Manoj K. Jayan have done the supporting roles. The first half moves little energetically, but the second half is little slow and stagnant. We would have watched many love stories, but this one is as usual and normal love story. Certainly youngsters and new lovers will not be disappointed as the romantic songs are good and lovely to hear.

Overall, the movie never repeats the original magic, but has its magic of its own!