After creating a great amount of ruckus on social media finally the multi starrer drama Vikram has come to the theaters. The film is about a cop who goes on a clandestine operation after a drug gang attempts to have their way with the system. Actor Kamal Haasan who was last seen in Vishwaroopam 2 is back on screens with his action crime thriller Vikram. Actors Vijay Sethupathi and Fahadh Faasil have played vital roles in the film. Director Lokesh Kanagaraj has helmed the drama. So, how has the mass action drama come out? Is it solid enough to entertain the fans of the actors, and will it add more weight to storyteller Lokesh Kanagaraj’s reputation as a commercial director? To know that let us get into the movie review. 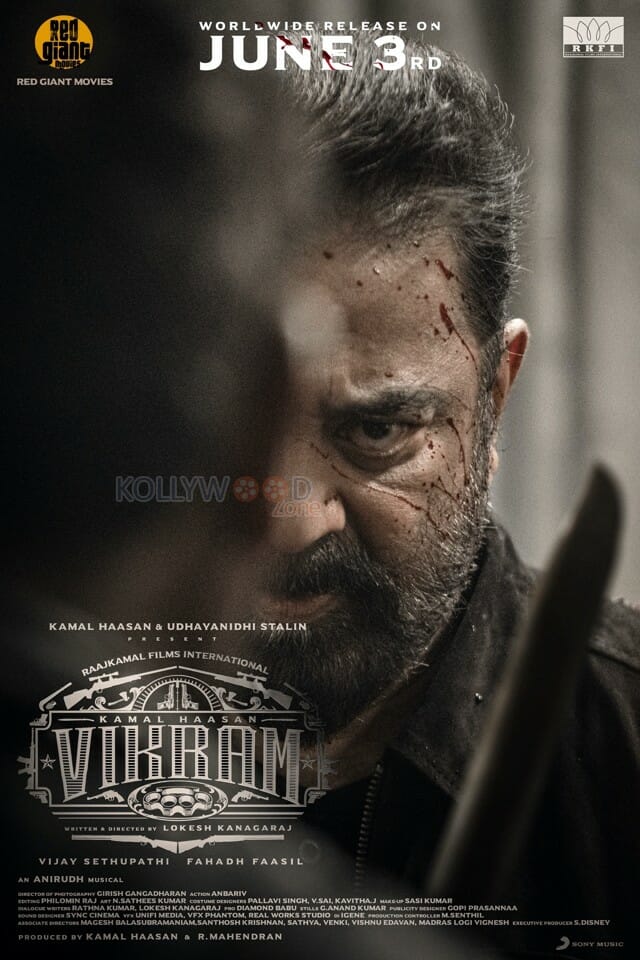 Vikram follows the life of Karnan (Kamal Haasan), a retired old man grieving the loss of his son Prapanchan (Kalidas Jayaram), an upright police officer. Vikram opens with the murder of Karnan along with the top officials of the police department by a drug gang that is on a mission to amend the rule of law. To tackle them, police chief Jose (Chemban Vinod Jose), sets up a covert operation and hand picks Amar (Fahadh Faasil), a competent officer to head it. Amar starts his operation from digging into the past of Karnan to get a sense of how a common man is connected to all these events. In the past, we are introduced to Karnan as a Casanova, alcoholic, and a drug addict. Despite his inadequacies, he tries to be a responsible granddad for his adopted grandson. On further investigation, Amar learns about Sandhanam (Vijay Sethupathi), the head of a large crime syndicate who is in search of a missing container filled with drugs that would land him in the good books of his boss Rolex (Suriya), who in turn would hand him the keys to glory in his kingdom.

On the other hand, Veerapandian (Gautham Sundararajan), a member of Sandhanam’s gang, tries to double cross him to retrieve the missing drug consignment and deliver it to Rolex to win his goodwill. But when Veerapandian assembles his men, and concocts a plan to get it done, he is ambushed by a group of masked men, and is assassinated. Amar chases the masked men and gets hold of a member of the gang. Upon learning that their next target is Rudra Pratap (Aruldoss), he goes to protect him. But the gang of masked men take Rudra Pratap as their captive and flee, while a part of them attempt to kill Sandhanam who is present at the spot. But Sandhanam breaks their bones and escapes. Amar goes after the group that took Rudra Pratap with them, and when he gets to them and tries to confront them, he gets the shock of his life. What did Amar learn at that moment, and will he be able to curtail the atrocities of the gang, is what makes the rest of the flick.

Through Vikram, director Lokesh Kanagaraj exhibits how good of a filmmaker he has become to rope in multiple actors with star power and handle them effectively to produce an uncompromising commercial product. Seems like soon he might even start a master class on it. Vikram opens with a jolt when its lead character Karnan is pronounced dead. With this cleverly calculated scene, Lokesh Kanagaraj draws us into his world the right way. Without wasting any time, he introduces his characters one by one and reveals their part in the plot. Then the flow slows down a bit with the investigation, and its effort to stimulate us with the idiosyncrasies of the ghost whose life is under scrutiny here. However, towards the end of the first half it picks up pace when it sets up the stage for the second half with a twist. Even though it is nothing we were not anticipating, the mass moment sits right.

Director Lokesh Kanagaraj in an interview had stated that he is a big fan of actor Kamal Haasan. In a way Vikram is sort of an ode to the actor from the fanboy Lokesh Kanagaraj. There are plenty of references to popular scenes and dialogues of the actor’s previous films. All of which culminates in setting up solid mass moments. Vikram banks heavily on action sequences. Even previous works of the film maker deployed action to get the proceedings going. Vikram takes that approach a step further. On the downside, director Lokesh Kanagaraj has never been one to shape his characters with nuances. Even in Vikram, he maintains the status quo. The formula seems to be quite simple: high adrenaline rush and less drama.

What has to be said of actor Kamal Haasan’s performance, huh? He is vibrant and formidable on screen. He is just natural. It is safe to say that he has rather lived the role than to have played it. Actor Vijay Sethupathi with his effortless performance makes his presence felt. Actor Fahadh Faasil for his part reminds us of the performer he is. Actor Arjun Das put on a show amidst the powerhouse of performers, and continues to be an admirable henchman. Actor Narain is effective as usual. Actress Gayathrie Shankar does justice to her part. Actors Harish Uthaman, Kalidas Jayaram, Chemban Vinod Jose, G. Marimuthu, Ramesh Thilak, Aruldoss, Sampath Ram, and Hareesh Peradi, have all chipped in and have played their part well. Actor Suriya sets the stage on fire with his cameo appearance. The rest of the cast has delivered what was asked of them.

On the technical front, music director Anirudh Ravichander has returned to his best in Vikram. His tracks are entertaining and his cracking background score assists to manifold the fervor of the mass moments. Cinematographer Girish Gangadharan has placed his camera at all best angles possible to ensure that he offers the audience a visual feast. His lighting is exceptional. Editor Philomin Raj compliments the work of his colleague with his fine cuts.

On the whole, director Lokesh Kanagaraj’s Vikram is bailed out by its racy screenplay and spectacular action sequences.