Talented cinematographer Nizar Shafi has turned film maker with his bilingual flick Seven only to deliver a brain messing thriller film with a good star power cast. Seven seems to be a half baked writing with the notion that the ‘different concept’ (according to the director) will keep the audience thrilled.

The film opens with Ramya (Nandita Swetha) rushing to the police station in the pouring rain to file a complaint about her missing husband Karthik (Havish). A smart and alcoholic cop Vijay Prakash (Rehman) pays attention to her and finds the identity of the missing personality parallel to another missing case filed by Jennie (Anisha Ambrose). Intrigued by the complexity of the case Vijay Prakash starts to investigate the case and while on investigation he finds another woman (Aditi Arya) who has reported a similar husband missing case in Chennai. 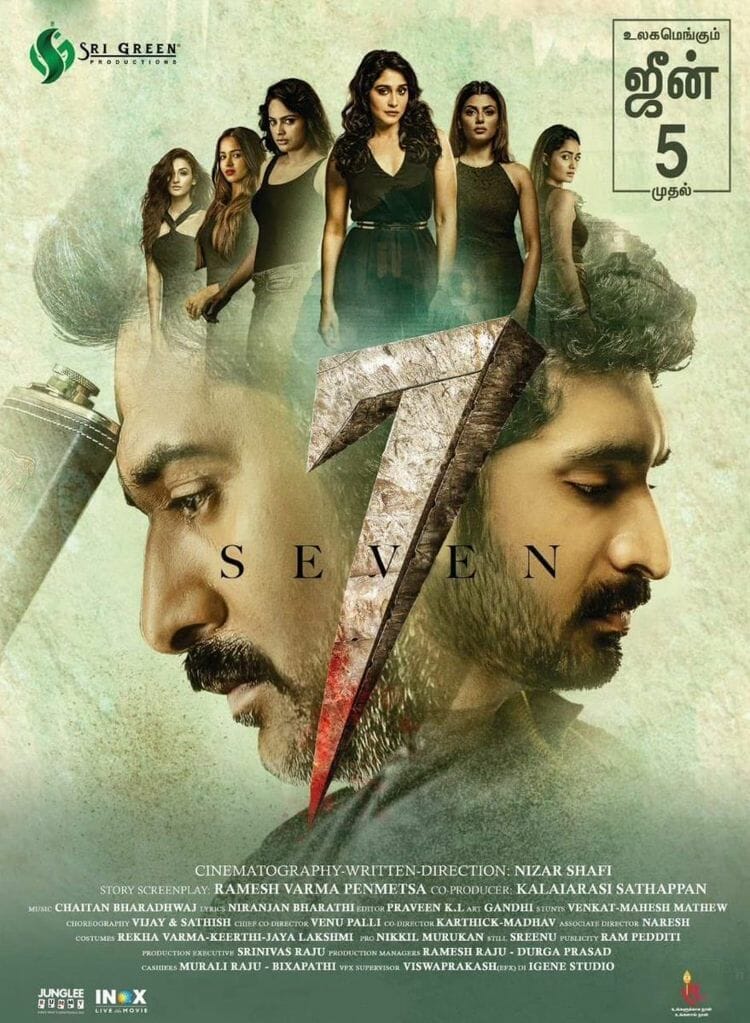 Then comes a mentally ill person who states that the person they are looking for is dead years ago, this leaves Vijay and his assistants to further perplexity. The fun point is taking the words of a mentally ill person the subordinates of Vijay comes to the dilemma that Karthick might be a ghost. Meanwhile, an attempt is made on Vijay’s life but he fortunately survives it. Vijay gets even more determined after the attempt on his life and refuses to accept the theory that Karthick is a ghost put forth by his assistants. He carries his investigation further with tenacity to nab the fraudsters before the victim count increases. He finally manages to track down Karthik and puts him behind the bars. But on the very same day another woman Priya (Trida Choudhury) claims that her husband is missing. The missing case which turned in to a fraud case gets more intricate after Priya’s complaint. Who really is Karthik, is he a ghost or a human or a fraudsters, to discern this, the director unveils a flashback of an incident that occurred in 1980’s involving Saraswathi (Regina Cassandra).

Though actor Rehman has given his best, his performance struggles to convince us. May be it could be the Dhuruvangal Pathinaru factor, after witnessing him in such a solid cop role we have tough times in making peace with the poorly written character of Vijay Prakash. Out of six female leads in the film only Regina Cassandra manages to shine given the scope of her character, again the writing and characterization in the only thing to blame. Chaitan Bharadwaj’s music has nothing special to offer to the movie. The RX 100 fame musician was just too loud to tolerate.

Nizar Shafi who is known for his camera works seems to have been in full confidence that the plot alone will help him to garner the attention of the audience. In that confidence he has left the logics as well as his narration efficiency in air. While he shines as a cinematographer as usual, he fails miserably as a writer with his attempt to make what is worth a stage drama in to a movie.

On the whole, indeed a different attempt but too many illogical and way dramatic scenes with apparent flaws have sunk the film. Though the plot looks very intriguing on papers but it not always the same thing one gets, as it appears to be and Seven happens to be one such thing.