The current comedy sensation Yogi Babu needs no introduction among the Tamil audience and so is the glamorous beauty Yashika Aannand. Bringing in the two trending artistes together is a clever strategic move made by the director as the venture has already garnered a good scale of attention of the audience for a minimalist project. The horror comedy genre has been repeated more than enough in the Tamil film industry in the recent years that even kids in the state are not scared of ghosts anymore. In the line of the horror comedy genre in Tamil cinema it will be the Yogi Babu starrer Zombie that is set to hit the screens next. A one and a half minute teaser cut has been unveiled by the production unit recently. 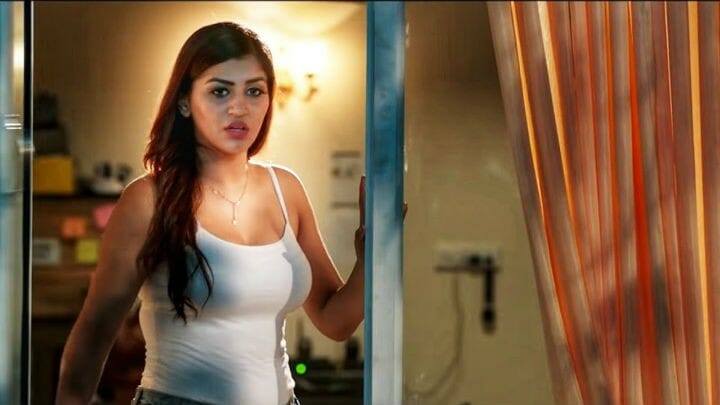 Amidst high expectations amongst the youth in the state the teaser hit the social media recently. But to everyone’s disappointment the teaser has not lived up to its expectation level. Besides a one liner from the comedian, the teaser hardly has any laughs. But as predicted there are some adult jokes which has enjoyed a good reception while there is a not in a good taste joke cracked on rape by the actor which has created a controversy among the audience. All we can hope is that that is the only rape joke in the horror drama. The director in an interview had stated that the film will be for all sector of audience and he had penned a script without any sort of offensive factor. But after watching the teaser we cannot be quite sure of that. Yashika Aannand has upped the glamour quotient as expected and looks smoky hot in the one and a half minute cut.

The comedy horror film will hit the screens under the directorial of Bhuvan Nullan R of Mo fame. The movie is the depiction of a chain of events that takes place in a single night in the background of Chennai to Pondicherry ECR road. Actress Yashika Anand plays a doctor in the movie and her association to the lead character is said to be a suspense element for the audience.

The music for the venture is composed by Premgi Amaran who dedicates a tribute to the Avengers theme music in the promo. The technical unit that worked on the Magnum Opus 2.0 has been brought on board for the flick. Apart from actors Yogi Babu and Yashika Anand, the comedy drama has T M Karthik, Mano Bala, Anbu Dasan, Chitra Akka, Lollu Sabha Manohar, Bijili Ramesh, popular YouTubers Sudhakar and Gopi portraying various supporting roles in the film. The production unit is planning to release the flick in the month of July and an official announcement of the release date is expected soon.

Fahadh Faasil is replaced by Arun Vijay in...