Home Kollywood News Dhanush next with Durai Senthilkumar gets a title!

Actor Dhanush was last seen on screens in the gangster saga Vada Chennai which hit the theaters under the directorial of director Vetrimaaran. As usual the Pollathavan star received critical acclamation for his role as a skillful carom player sprouting to the stature of a gangster. Ameer, Andrea Jeremiah and Aishwarya Rajesh played key roles in the entertainer. Shortly after Vada Chennai the actor began to shoot for the project directed by Durai Senthilkumar which went on floors without a title. Now, the production unit has unveiled the title of the flick while the actor has shared the first look poster of the film. 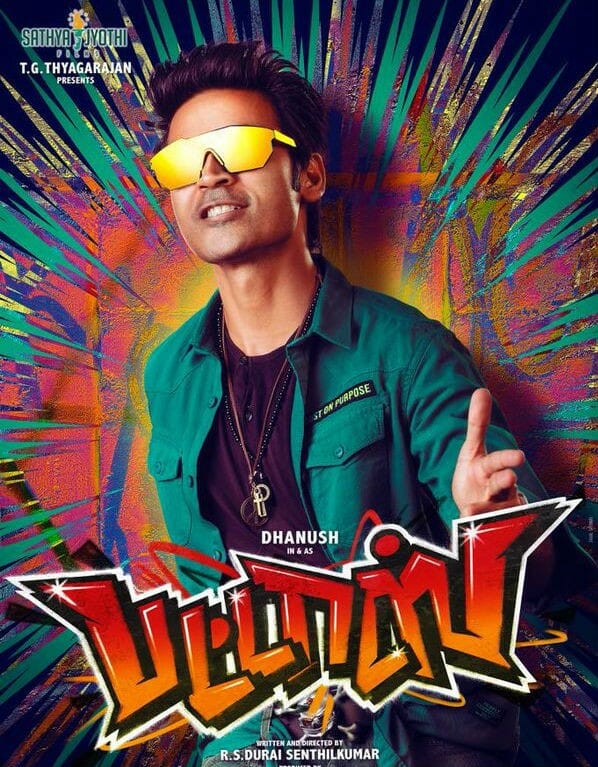 Currently, the actor is busy shooting simultaneously for two of his next ventures one titled as Asuran directed by Vetri Maaran and also for an untitled project directed by Durai Senthil Kumar of Kodi and Ethir Neechal fame. Now, the project has got a title and it is named as Pattas. The title of the film was recently unveiled by the production unit on the star’s birthday. And a day after which the actor has launched the first look poster of Pataas to his fans on social media. Taking to his twitter handle the actor shared the first look poster of the drama in which he looks cool and stylish with sporting sunglasses, jacket and a hairstyle similar to the one that he had in 3.

The drama which went on floors in Kuttralam is said to have reached the finishing stage. Actor Dhanush is set to be seen in a dual role in the movie where he will be essaying the characters of a father and son. The father character will be paired up with actress Sneha. The duo has shared the screen for the second time nearly 13 years after their critically acclaimed film Pudhupettai, directed by none other than the actor’s own brother Selvaraghavan. Actress Mehreen Pirzada will play the love interest of the younger version of Dhanush. Apart from Dhanush, Sneha, Mehreen Pirzada, the drama also has Naveen Chandra who is set to play a pivotal role in the forthcoming flick. Om Prakash will be cranking the camera for the movie. The motion picture is bankrolled by Sendhil Thyagarajan and Arjun Thyagarajan under the banner Sathya Jyothi Films.

Earlier speaking about his reunion with actor Dhanush, the story teller stated, “Personally, I am very existed and delighted to work with Dhanush again after the success of Kodi. This is a very big opportunity for me and I feel blessed to do a film with a prestigious production company. Their way of planning and execution of a project is quite astounding and stands as an example for many in the industry.”

On the professional end, after wrapping up Vetri Maaran’s Asuran and Durai Senthil Kumar’s Pataas the actor will joins the sets of Ratsasan fame director Ram Kumar for an untitled movie. Apart from it, the actor recently revived the project with story teller Karthick Subbaraj which was supposed to go on floors a long time ago. The actor also has also inked his signature for an entertainer which will be directed by Mari Selvaraj of Pariyerum Perumal fame.