The cost of film making has become quite affordable. All you need is a small crew and a camera. There you go! you can call yourself a film maker. As a result of these the number of films made on shoestring budgets are simply pilling up each day in Tamil cinema. Some of which turn out to be a real wonder but many suffer the fate of poor craft. If the story is good, the technical department falls flat, and vice versa. Then there are movies that end up as a complete disaster. Filter Gold belongs to the latter type. So how bad is Filter Gold in its craft? To know that let us get in to the movie review. 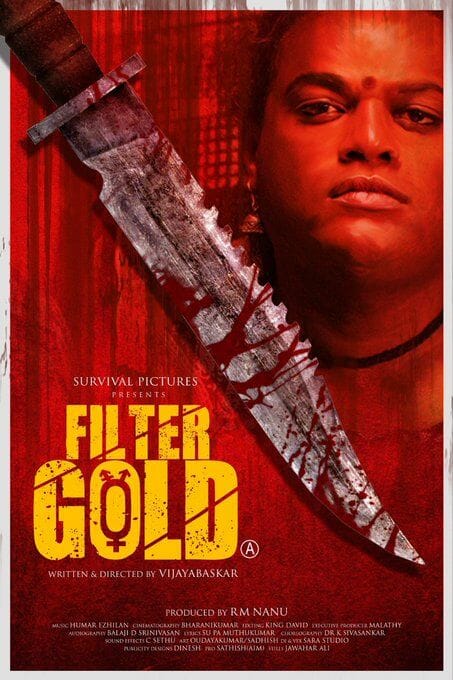 The film follows the lives of two transgender women Viji (Vijaya Baskar) and Dora (Dora Sree). Viji and Dora share a rented house in an underdeveloped community. They are friends with Shanthi (Sugumar Shanmugam), who also happens to be a transwoman. One day Shanthi gets killed. Viji takes it up on herself to find out what happened and who was responsible for the murder. Meanwhile, a group of creepy men in the locality cause trouble for women in the community. Aasari (Siva Elango), a carpenter from the place seeks the help of Viji to put those men in line. In unexpected turn of events, Aasari’s son is smitten by Dora. They develop feelings for each other. When Aasari learns about his son’s relationship with Dora, it does not evoke a good reaction in him.

Viji senses that Dora’s life might be in danger because of Aasari. Now he must protect her. Also, find out who was behind Shanthi’s murder. Will Aasari’s son and Dora end up together, will Viji be able to protect them from Aasari, and will he find out Shanthi’s killer, is what makes the rest of the flick.

Director Vijaya Baskar seem to have put all his balls on his notion that his good intention alone is sufficient to build a flick around. Filter Gold lacks everything that are just basics to make an entertainer. There is not a proper screenplay, the characterization lacks authenticity, the camera work is middling, editing is less than that of the YouTube standards these days, and the music is not any exception either. It is a total collapse across all cylinders making it difficult for the audience to stay in the flick even if we force ourselves. Just 10 minutes in to the drama and the movie ceases to have our attention.

There has been a great fallacy in Tamil cinema between good intention and film making. Just someone wanting to make a film on a social issue qualifies as the norms to make a film. The craft is often overlooked. It does not matter how good intentions are or a story is, if it is not presented with a proper screenplay and, if not top of the game, a basic level of technical side, it cannot get the attention of the audience. It is high time that the storytellers and bankrollers of Tamil cinema realize that.

Actor Vijaya Baskar tries hard to be natural on screen. On certain portions he manages to get it right, while mostly he over performs. Actress Dora Sree struggles in the emotive portions. Actor Siva Elango does what was asked of him. Actor Sugumar Shanmugam does not have much to offer in a limited screen time. The rest of the cast has also delivered a middling performance.

On the technical front, it is a total collapse in the technical department. Music director Human Ezhilan’s tracks as well as his background score do not add any value to the drama. Cinematographer Bharani Kumar’s camera work is sloppy and clumsy. Editor King David’s scissors are not sharp enough to hide the shortcomings of his colleagues.

On the whole, Filter Gold desires to cast light on the plight that transgender women have to endure in the society but its dearth of basic essential film making traits disrupts its very own desire.