Director Saran who has delivered some time worth wasting entertainers like Kadhal Mannan, Amarkkalam, Attagasam, Gemini, and Vasool Raja MBBS was in a long break from cinema after the commercial failure of Aasal before returning to direct Aayirathil Iruvar two years back which also did not fair in the box office. Now, nearly after two years the director who has delivered some box office crackers is back on screens with the horror comedy mass action entertainer Market Raja MBBS. Actor Arav Nafeez who had earlier appeared in supporting characters in flicks such as O Kadhal Kanmani, and Saithan has made his lead debut in the entertainer. Film maker Saran after a stint of commercial failures has decided to blend some of his previous hit ventures to craft the plot of his new movie but with an interesting angle of ghost to it. But has it worked out?

Market Raja (Arav Nafeez) is a local market don, a sociopath gangster from North Chennai who would do anything to gain power and rack up money. He lives with his mom Sundari Bai (Radhika Sarathkumar) who takes care of herself with the small business she runs with the influence of her son. Market Raja works for Radhaa (Sayaji Shinde), a corrupt politician who is hungry for power and would take down anyone who comes on his way. He has a power tussle with his opponent Ramadass (Hareesh Peradi) whom he decides to eliminate. So he concocts a plan to take him down and employs Market Raja to execute the murder of Ramadass. 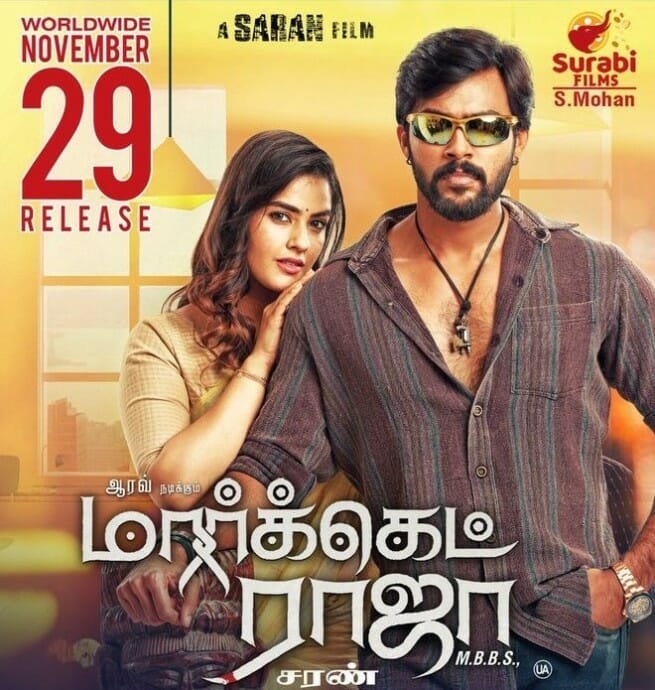 Market Raja successfully accomplished the plans but gets his name in the books of police officers. In order to control the worsening law and order situation the police department brings on board an encounter specialist (Pradeep Rawat) from the North to tone down the violence. The police sketch an encounter plan and are set to take down Market Raja. Meanwhile, we are introduced to the heroine Vanisri (Kavya Thappar) a medical college student who falls for the grit of our mass hero. But Market Raja turns down her proposal saying a gangster should not fall in love. A fellow student named Chandrababu (Vihaan) proposes Vanisri in vain. Instead of turning him down directly she challenges him to visit a burial ground at midnight if he wants her to accept his proposal which he accepts.

The same night the cops are after Market Raja and he is on the run for his life. He enters the graveyard where the cops open fire at him. But Market Raja evades and the encounter not only goes wrong but ends up taking the life of an innocent Chandrababu. Yeah, you guessed it right here is where the ghost story begins. The ghost of Chandrababu enters Market Raja and in overnight a brawny and ruthless don becomes a meek don who goes to the medical college. This puts Market Raja’s associates Das (Adithya) and lawyer Varadha (Chaams) in trouble. Now, they have to make sure that this secrete does not reach their local rivals as it would threaten their realm. What will happen to Market Raja, will the ghost choose to leave his body, is what makes the rest of the movie.

Film maker Saran had an interesting idea of a meek ghost getting in to the body of a beefy don and making him meek. Something quite contrary to what the Tamil audience have witnessed so far. Generally, it is the ghost that makes a fearful hero in to an intrepid warrior. But the error in the execution part along with the absence of the Crazy Mohan and Kamal Haasan effect has resulted in an entertainer that not only has no purpose but seems like a cluster of scene clips run together from various other films. With little focus on the script, Saran could have crafted a wonderful masala entertainer and announced his return to the industry in style. But it is what it is.

Actor Arav fights hard to fit in the lead role and it is difficult to buy him as a mass lead hero. The actor looks like he has got a lot of things to set right before he begins to shoulder a film on his own. Actress Kavya Thapar struggles to fit in the role while Nikesha Patel’s role was deliberately crafted to pass double entendre jokes. As usual actress Rohini has delivered a neat performance. It is Radhika Sarathkumar who is the show stealer here who offers us relief with her seasoned and endearing recital of her character. The rest of the cast are adequate.

On the technical front, it is a big let down in the musical and editing department by Simon K King and Gopi Krishna while cinematographer K. V. Guhan has delivered what the movie requires.

On the whole, Market Raja MBBS looks like a cluster of scenes from the director’s previous films put together and feels like a three hour of self inflicted penalty.