Dance choreographer Baba Bhaskar debuts as a director with Kuppathu Raja, an ordinary movie that has nothing new to offer to the Tamil audience. However, actor G. V. Prakash Kumar steals the show with his thara local performance in the film.

Rocket (G. V. Prakash Kumar) is a careless as well as a jobless youth in North Chennai who at times assists in seizing of vehicles whose possessor fails to repay their loan or dues. Oor Gnayayam (M. S. Bhaskar) is a rickshaw puller and is Rocket’s father. Rocket has a long standing feud with his area rowdy Raja (Parthipan), who heads a gang of five members and has a high image in the locality. Raja is known as a die-hard M.G.R fan. Both Raja and Rocket go against each other to prove who is powerful in the locality. 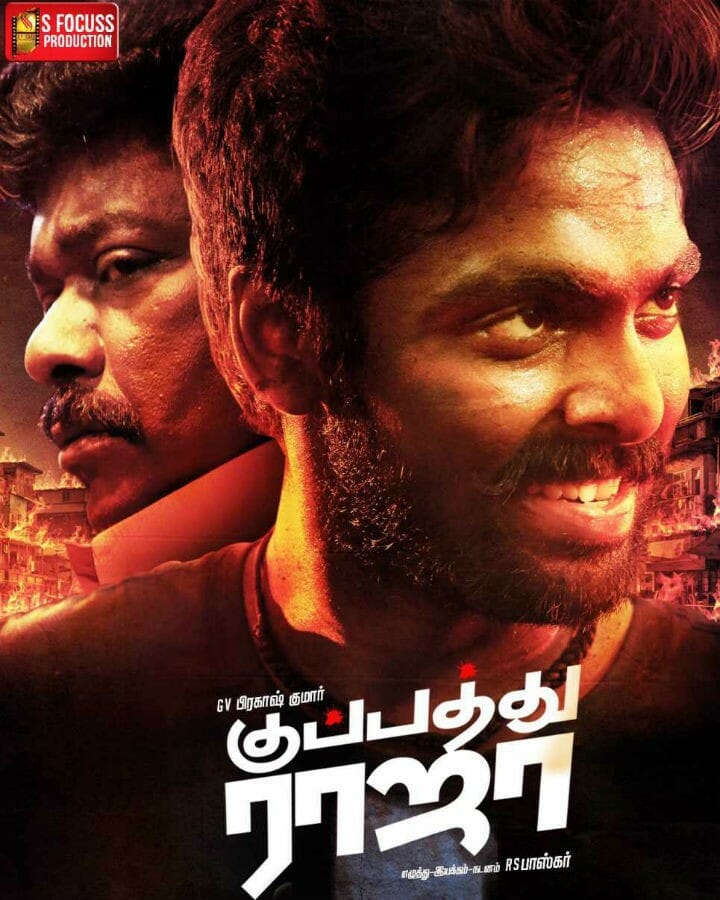 Meanwhile, as all unemployed heroes in Tamil cinema have a successful love story going on in their life, Rocket also has a love story. He is in love with Kamala (Palak Lalwani) a girl from the same slum. While, everything seems to go well in between Rocket and Kamala, Mary (Poonam Bajwa) relocates to the locality. Now, Rocket has an eye on Mary while still in love with Kamala. We get to see a lot of close up shots of Mary’s hips. It seems as if Mahesh Muthuswami had been instructed to cover Mary only from close angles.

This is all the first half of the film is about. We really do not get to see any griping moment in the movie in the first half. It is all about Yogi Babu filling up the space with his bundle of one liners, which keeps the film going.

Few children fall ill in the locality after consuming chocolates made from a chocolate factor in the same locality and a kid goes missing but we are just left to wonder as to what happen to them as Rocket’s relationship gets to the cliff.

A character close to Rocket is murdered in a terrible way and suddenly the hero wears the mask of avenging the person responsible for the death of his loved ones. The sudden change over of the character seemed quite artificial as it was not relatable to the character of the hero that was portrayed in the first half. How Rocket gets to the real murder is what the rest of the story is about.

As said earlier G. V. Prakash Kumar steals the show with his local performance. The actor seems to be matured and evolved in this film as an actor in all sectors. Parthiban is very aptly chosen for the role and has quite easy pulled off a stunner with ease as it was a similar kind of a role that the actor did in Naanum Rowdy Thaan. Palak Lalwani to everyone’s surprise fits in the role of a North Chennai girl quite fittingly while Poonam Bajwa has been roped in only for the skin show.

On the whole, G. V. Prakash Kumar’s Kuppathu Raja has nothing new to offer to its audience than the same old hero avenging the murderer story.