Director Elamaran as actor is the man, we are so used to seeing on his YouTube videos. He really does not make any effort to perform. He just mouths his dialogue just like a conversation that he would have with anyone in real life. Yet that is entertaining. Seems like he has landed on a lucky star at the moment.

Yep, Tamil cinema has finally witnessed the debut of sensational film critic Elamaran popularly knowns as Blue Sattai Maran. If there is one film critic that the story tellers in k-town loath so much it would be undoubtedly Elamaran. Literally, many film makers were waiting to tear the man apart when he makes his first film. If fact, many have even sworn in the past that they would do it. When this was the case, the news of Elamaran’s debut flick hit the internet immediately making its way in to the trending zone becoming the troll material. Surprisingly, the man seems to have dissolved the hatred that was held against him with his drama Anti Indian. So how has his much awaited Anti Indian come out? To know that let us get in to the movie review.

Anti Indian is centered around Baasha (Elamaran), a political advertisement wall painter. The film opens with the murder of Baasha. With the murder, things get messier because of his complex family structure. His father is a Muslim, and his mother a born Hindu but later shifted to Christianity. Problem erupts because of his mixed religious identity. After police procedures, Baasha’s friends takes his body to a nearby mosque for burial. To their shock, the authorities refuse to allot space citing that Baasha never practiced Islam and that his mother was a Hindu. One of Baasha’s relative Ezhumalai (Jeyaraj), a local newbie right wing politician receives the body and takes it to the Hindu cremating ground. Even there the officials deny to bury the body stating that he was a Muslim. A group of Christians enter the picture led by a priest claiming that Baasha’s body should be buried in their burial ground as his mother embraced Christianity.

Meanwhile, by election is declared on that constituency. The ruling party is on the verge of losing the election. The head of the party and the Chief Minister of the state (Radha Ravi) is desperate to win it. He deploys the police force to somehow overturn the situation and earn a victory. On parallel developments we have a superstar actor Kabali who’s decision can alter the election results. The Chief Minister along with the assistance of the police department concocts a plan. They either want to win the election or stop the election in case their defeat is evident by stirring up religious riots. As the uncertainty around the death of Baasha begins to get media traction, politicians place themselves in to the frames and politics erupts on the burial of the cadaver. Will people realize the dirty politics that is played behind the dead body of Baasha, who is going to bury the body at last is what makes the rest of the flick.

Director Elamaran in a recent interview recited the popular dialogue from Soorarai Pottru, “Jaichita Maara” when asked about how people have received his film. There could not be a better response than that. Not sure how many film makers would have gone with the title Anti Indian knowing the magnitude of political heat that would have come to the release of the film. Director Elamaran’s bravery has rewarded him quite well. Being point blank, Anti Indian does not have the technical power to be even considered as a film. The imperative aspects that are a must for a film like proper screenplay, good performances, cinematography, editing, nothing falls in place for the entertainer. Yet Anti Indian is entertaining. The strength of the film lies in the bold and razor-sharp dialogues.

The entertainer is built on a simple premise. But story teller Elamaran exhibits his adeptness in setting up situations and the cunning political angles to make a solid entertaining political satire out of Anti Indian. For instance, Baasha’s family background is smartly designed to create room to make a simple story knot work well. His family structure gives ample space for a truck load of satires. In fact, the whole film is based on this simple intelligent arrangement. Everything is simple about Anti Indian. It is this simplicity that makes the flick entertaining. There are no euphemisms and identity for us to work our brain. Elamaran goes with brutal honesty and direct about the politics he wants to discuss. It is one of the reasons, or perhaps the only reason why the audience have given such a warn response to the drama. The audience celebrate the entertainer not for its craft but because it is an honest flick from an honest film maker. It would be interesting to see where Elamaran goes from here. 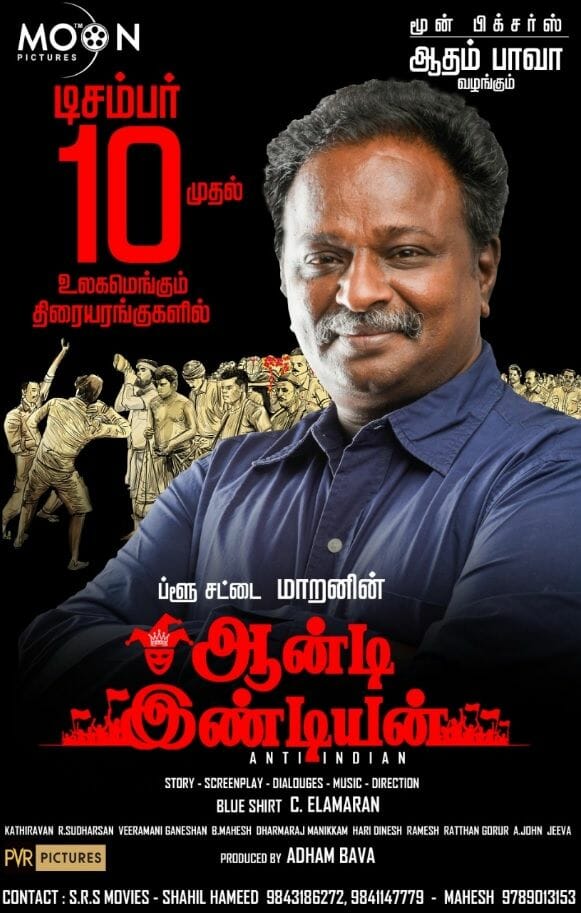 Director Elamaran as actor is the man, we are so used to seeing on his YouTube videos. He really does not make any effort to perform. He just mouths his dialogue just like a conversation that he would have with anyone in real life. Yet that is entertaining. Seems like he has landed on a lucky star at the moment. Actor Jeyaraj has done justice to his role. Actor Aadukalam Naren is effective as usual. Veteran actor Radha Ravi makes his presence felt. Actor Velu Prabhakaran is adequate. Actress Lollu Sabha Seshu is impactful. The rest of the cast has delivered a below par performance.

On the technical front, the film is quite weak. Elamaran debuts as a music director as well in Anti Indian. His tracks are pretty average. His background score is adequate for the entertainer. Cinematographer Kathiravan’s frames could have been better. The visuals look like the vintage marriage videos. Editor Sudharshan’s scissors should have been a lot sharper.

On the whole, Anti Indian marks Elamaran’s successful venture in to Tamil cinema but his sustainability remains in how he improves his craft.