The hero of the film has been ambitious enough to strive and become a full-fledged hero figure from a comedian image he has been holding. For him, it is quite not good news because his career rocket has not launched high enough. The film ‘Sakka Podu Podu Raja’ has made a comedy out of a film. More clearly it can be said that it was practically a comedy of errors. The film starts in a very common and cliché way where the hero is seen to help a girl elope with her love and on his way he sees a girl who he falls for head over heels at first sight only. 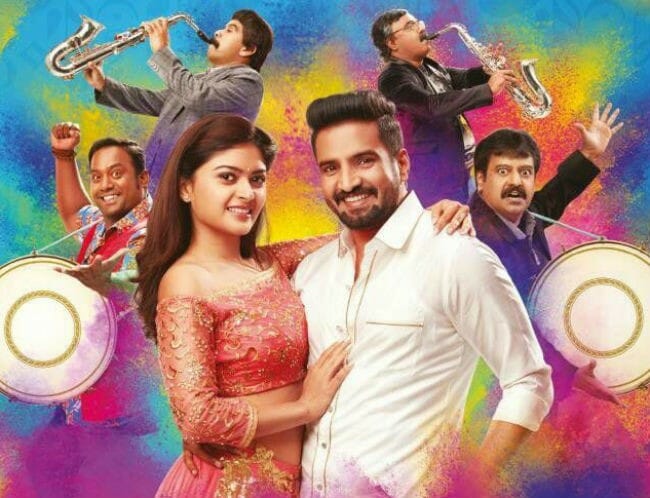 Talking about the star cast, the hero is Santhanam and the leading woman opposite him is Vaibhavi Shandilya. The other cast which includes the villain of the film as well are Daniel Annie Pope, Papri Ghosh, Sanjana Singh, Sharath Lohitashwa, Robot Shankar, Santhanam, Vivek. Well, there was a lot of expectation from the film that this will be the platform where the hero will be able to show some different colors and establish himself as a hero but it did not work at all.

The action-packed sequence and the bombastic dance moves were also not enough to take this film to the good pointers. The plot is poor which deals with the love angle of the hero facing several obstructions. But the reason for these obstructions seems to be of stone-age actually; why? Because he has fallen in love with the sister of a pair of goon and those very goon turns out to be the antagonists in the film. So where the hero does stands in the film? What is his mission? Well, that’s pretty clear… all he has to do is to win over the goons and ask the heroine’s hand for marriage. The whole film revolves around this plot and the first half of the film is intolerably stupid, while the second half is of no help to improve the situation.

The film can be clearly stated as a waste of talent and talented cast. The fans and the viewers had their expectation bar set much higher but all that just went in vain. the actor-director duo was a wow factor in the film but after its release, the collaboration seems pretty disastrous. Many popular names associated with the film, namely Vivekh, VTV Ganesh and ‘Powerstar’ Srinivasan were also not enough to make the film platter taste any better.

However, the action sequences were pretty new and well organized and another thing that can be boasted about is the music of the film which was composed STR. Well, all these facts and the film not going well in the box office might be a clear indication for the hero Santhanam was better accepted playing the role of a lead’s friend maybe. Well, we can only cross our fingers and hope to see a film which would be at least better than Sakka Podu Podu Raja.