A well-made romance drama that explores the intricacy of a relationship is always a delight to watch. The series is a story about a married couple who choose to part ways after being confronted by challenges they did not anticipate in life. Actor Mahat Raghavendra who was last seen in Tamil in a cameo role in the action thriller Maha is back on screens as the lead hero in the romantic web series Emoji. Actresses Devika Satheesh, and Manasa Chowdary, have played vital roles. Director S Rangasamy has helmed the web series. So, how has the series come out? Is it romantic enough to garner the attention of the youngsters in the state and be a successful venture for actor Mahat Raghavendra? To know that let us get into the series review. 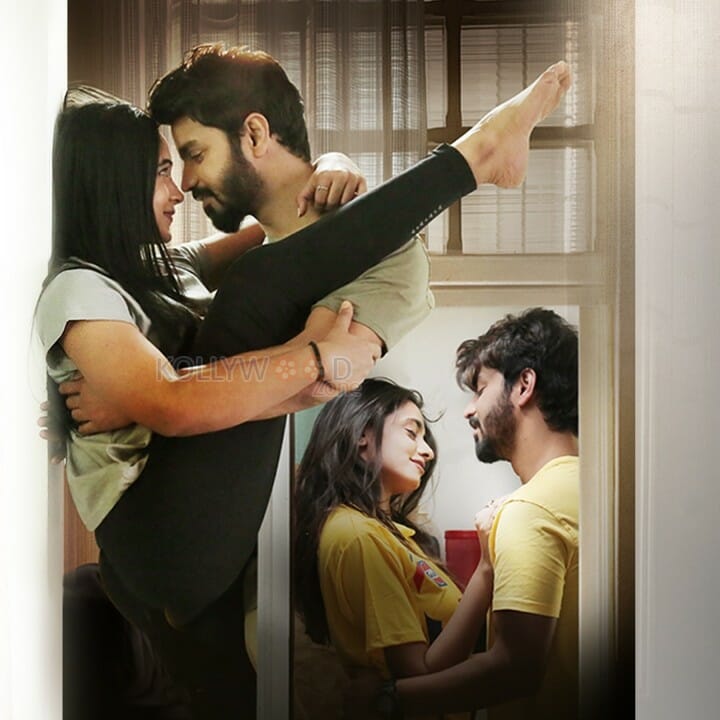 The series revolves around Aadhav (Mahat Raghavendra), a young man who has a hard time figuring out the right person to be in a relationship with. Emoji opens with Aadhav in despair trying to cope with his probable divorce. Then the series cuts to the flashback to give us the story of where it all began and why it has come down to where it is at present. We are introduced to two past relationships of Aadhav. Why it has come to divorce, will Aadhav accept his divorce, will he choose to fight to get his wife back, or will he go back to his past relationship, is what makes the rest of the flick.

Making a surface level lighthearted romance drama is a simple task. But when you get down to make an intense romance drama that is profound, it is not an easy job. It takes quite an understanding of human complexities, and intricacies, and patience to put together situations to bring out these elements. Director S Rangasamy wants Emoji to be a profound modern day romance drama but is not ready to put in the effort needed to build one. He picks the right topics to thread on though. Friendship that blooms to relationship, live in relationship, break up, patch up, divorce. The only good thing about Emoji is it does not get didactic when depicting these elements. But the issue is these factors are written from a convenient perspective, and complex matters are treated in a simplistic way. This approach leads to mediocrity, and does not take long for the proceedings to lose the attention of the audience.

In fact, the series loses most of its stream by the time it reaches the third episode. After that point, all we get is the fluff material deployed to stretch time. The characterization is another stumbling block. Not just the script, even the characters lack depth. Shallow characters do not get us to relate to what the characters are undergoing emotionally. And what happens on screen seems contrived. As if the series does not already have enough to lose audience’s interest, story teller S Rangasamy has VJ Ashik deliver irksome one-liners in the name of quips. Finally, after navigating pointlessly for 3 episodes the series arrives at the finish line. Suddenly it gets perky, and we have the message for which the series was made, delivered. But confusion prevails as to how much the content echoed the message.

The best segments of the series come when it does not stress itself too much, and moves on a lighter note. Emoji would have had a better shot at entertaining the audience, if film maker S Rangasamy had opted to treat it as a feel-good romance drama. Instead of trying to swim in streams that are not familiar to him. But he takes the risk, and gets caught in the maelstrom.

Actor Mahat Raghavendra is a fine choice to play Aadhav. His role hardly puts him to test, and whenever it does, he caters. Actress Devika Satheesh has so little to do in the proceedings despite it being a relationship drama. That is how bad her part is written. Sadly, the actress only makes it worse with her performance. Even actress Manasa Chowdary does not live up to her part. Actor Aadukalam Naren makes his presence felt even in a limited screen time. Comedian VJ Ashik does not serve the purpose for why he was brought on board. In fact, he achieves the contrary by annoying us with his poor timing and badly written comedy. Actress Priyadarshini Rajkumar is adequate. The rest of the cast has delivered an average performance.

On the technical front, music director Sanath Bharadwaj tracks are average. But his background score adds value to the film. Cinematographer Jalandhar Vasan has done a fine job covering the drama. His cameras are at better spots and his visuals are a sight for sore eyes. Editor M R Rejeesh has put his scissors at right places to enhance the work of his colleague.

On the whole, film maker S Rangasamy’s attempt to make a modern-day romance with Emoji is marred by surface level writing and bad performances.