With having Naanum Rowdydhaan in mind, and equating it to director Vignesh Shivan’s one line of Kaathuvaakula Rendu Kaadhal – a man finding it difficult to choose between two women, – it is easy to get carried away with the possibilities that it opens up for a fine trip of comedy. If you had, the joke is on us. Director Vignesh Shivan moves the narrative of the entertainer as if a parent would calm their crying child – make false promises.

When Tamil cinema was getting beaten down in the mass culture, director Vignesh Shivan went different and treated the audience to a delightful experience with his sophomore flick Naanum Rowdydhaan. He sort of tries to do the same with Kaathuvaakula Rendu Kaadhal. The entertainer is about a man who tries to manage two relationships simultaneously, but when reality hits he dangles to choose between them. Actor Vijay Sethupathi who was last seen on screens in the Kadaisi Vivasayi is back on screens with his romance drama Kaathuvaakula Rendu Kaadhal. Actresses Nayanthara, and Samantha Ruth Prabhu have essayed the female lead roles. So, how has the flick come out? Does the triangle love story have enough juice in it to get the attention of the young crowd? To know that let us get into the movie review. 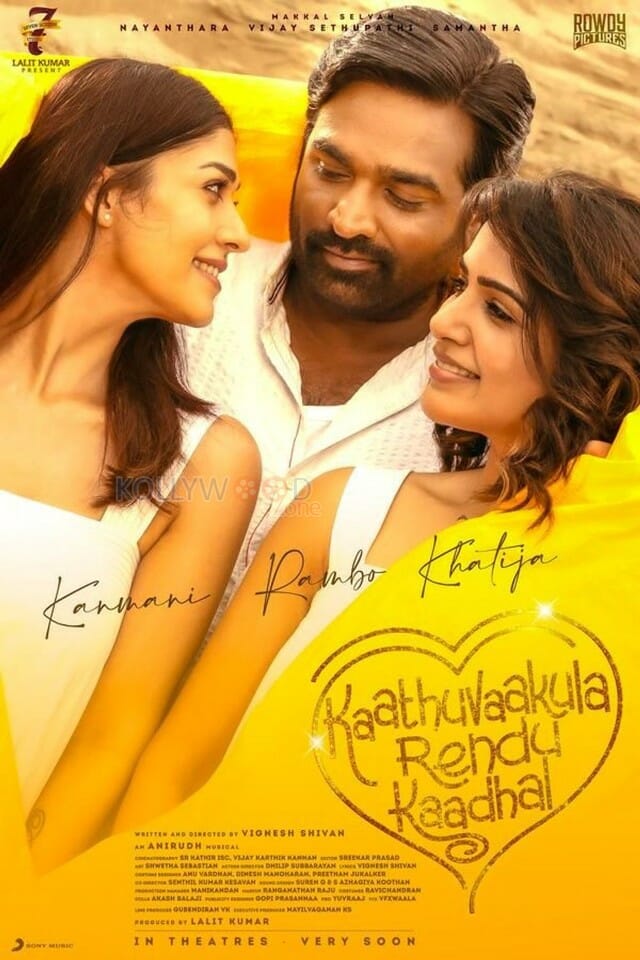 Kaathuvaakula Rendu Kaadhal follows the life of Ranjankudi Anbarasan Murugaesan Boopathy Oohondhiran aka Rambo (Vijay Sethupathi). When the film opens, we see a young boy abandoning his unwell mother buying into the narrative that he is cursed, and that his very presence might put his mother’s life in danger. Fast forward, that boy has become a young man who juggles two jobs. In the morning he is a candid cab driver, by the night he takes the role of a bouncer. He comes across Khatija Begun (Samantha Ruth Prabhu), who is forced to put up with her abusive boyfriend, and Kanmani Ganguly (Nayanthara), an independent woman who takes care of her siblings. These two educated women get drawn to Rambo – a kind, compassionate, stout, in definition, a man with the heart of 24 carat gold and sturdiness that of a lion to trash 20 to 30 men at a time, and falls in love with him.

The man being the man, begins to think that the jinx of him has finally been wrecked just because he has scored two women. Since he is a kind-hearted gentleman, he struggles to make up his mind. So, what does he do? Not wanting to hurt anybody’s feelings, he kindly choses to form a love triangle. We cannot quite seem to comprehend what the women see in Rambo. Perhaps, some sort of magical feel, the love thing, you know? It is him, they both want. Does not matter, if there are other good men in town. From there everything becomes a competition. They contest with each other trying to win him over. Our benign Rambo is shown to be bombarded caught between the two beautiful women. But we, as an audience, have a feeling that he is actually enjoying the ride. So, of Khatija Begun and Kanmani Ganguly, who Rambo chooses in the end, and what reasoning he is going to give us, is what makes the rest of the flick.

With having Naanum Rowdydhaan in mind, and equating it to director Vignesh Shivan’s one line of Kaathuvaakula Rendu Kaadhal – a man finding it difficult to choose between two women, – it is easy to get carried away with the possibilities that it opens up for a fine trip of comedy. If you had, the joke is on us. Director Vignesh Shivan moves the narrative of the entertainer as if a parent would calm their crying child – make false promises. For instance, take the trailer scene, where Kanmani asserts to Khatija that Rambo wedded her, to which Khatija retorts claiming that Rambo slept with her. Moments later we discovered, both had lied. If this trick is followed only in this instance, it can be laughed off as comedy. But this is how an extensive portion of the film is carried forward. We are left wondering, could this statement be true, or is this one of their games of lies. Perhaps, it is our crime to have drawn expectations from the story teller’s previous work.

The bigger issue is, even after taking Kaathuvaakula Rendu Kaadhal as a light hearted film as it expects us to take, it disappoints. Not insignificantly but substantially. Director Vignesh Shivan’s Kaathuvaakula Rendu Kaadha is a drama where cerebrum has no onus. Instead of exploiting this advantage and taking us on a joy ride, filmmaker Vignesh Shivan tries to dupe us with his drowsy writing. Literally there seems to be no real effort. Be it the way the comedy is written or the characterization. The script of the flick looks like homework done sitting in the last bench just after the tutor began to inspect from the first. The characters behave conveniently to the wishes and whims of the film maker. On top of it, the characterizations are so shallow that we do not root for anybody. As we witness three individuals striving to forge a relationship on screen, we kind of feel it is best for everyone involved to go their separate ways.

Actor Vijay Sethupathi cakewalks his character. It is his super natural performance that mitigates banal stuff and offers a bit of relief. Actress Nayanthara and Samantha Ruth Prabhu both have played their part well. But Samantha Ruth Prabhu slightly over takes her costar and scores with her amusing performance. Veteran actor Prabhu has done justice to his role. Veteran choreographer Kala Master is a perfect catch for the role. She makes her presence felt. Looks like storyteller Vignesh Shivan penned her part with having her in mind. Actress Seema is effective as usual. Actor S. Sreesanth is adequate. Comedian Redin Kingsley is functional. The rest of the cast has delivered what was asked of them.

On the technical front, rockstar Anirudh Ravichander adds value to the drama. His songs are okayish. His background score, especially in the comical portions amplifies its magnitude. Cinematographers S. R. Kathir and Vijay Karthik Kannan have done a fine job covering the film. Editor A. Sreekar Prasad’s scissor work has enhanced the work of his colleague.

On the whole, director Vignesh Shivan’s Kaathuvaakula Rendu Kaadhal is a visual representation of male fantasies which end up assaulting our intelligence.