Director Vasanth helms Sivaranjiniyum Innum Sila Pengalum with a crystal-clear thought to shed light on women’s lives. He cleverly structures his shorts on three different periods. So that he could show us the patriarchal societal system has not changed much. He captures the dryness in the lives of women who are forced or rather systemically taught not to have an independent thinking of their own, let alone the dreams. Even their financial independence cannot give them their much desired redemption.

It is not often we get films that are centered on women. Even when we do, they do not always talk about the plight of women. This is not just the case with Tamil cinema, but of the world cinema as well. So, when a women centric film of eminence comes in, it stands as an odd one out. Sivaranjiniyum Innum Sila Pengalum is one such rare gem. Director Vasanth is one of very few directors in Tamil cinema that have an interesting filmography to their name. His all-time classic Rhythm is cherished by many even in this generation. The film maker who did not have his name in the director card for nearly half a decade has put back his name on it with his latest directorial drama Sivaranjiniyum Innum Sila Pengalum. The film is made of three shorts based on the stories by authors Ashoka Mithran, Adhavan, and Jeya Mohan. So, how has the entertainer come out? To know that let us get in to the movie review. 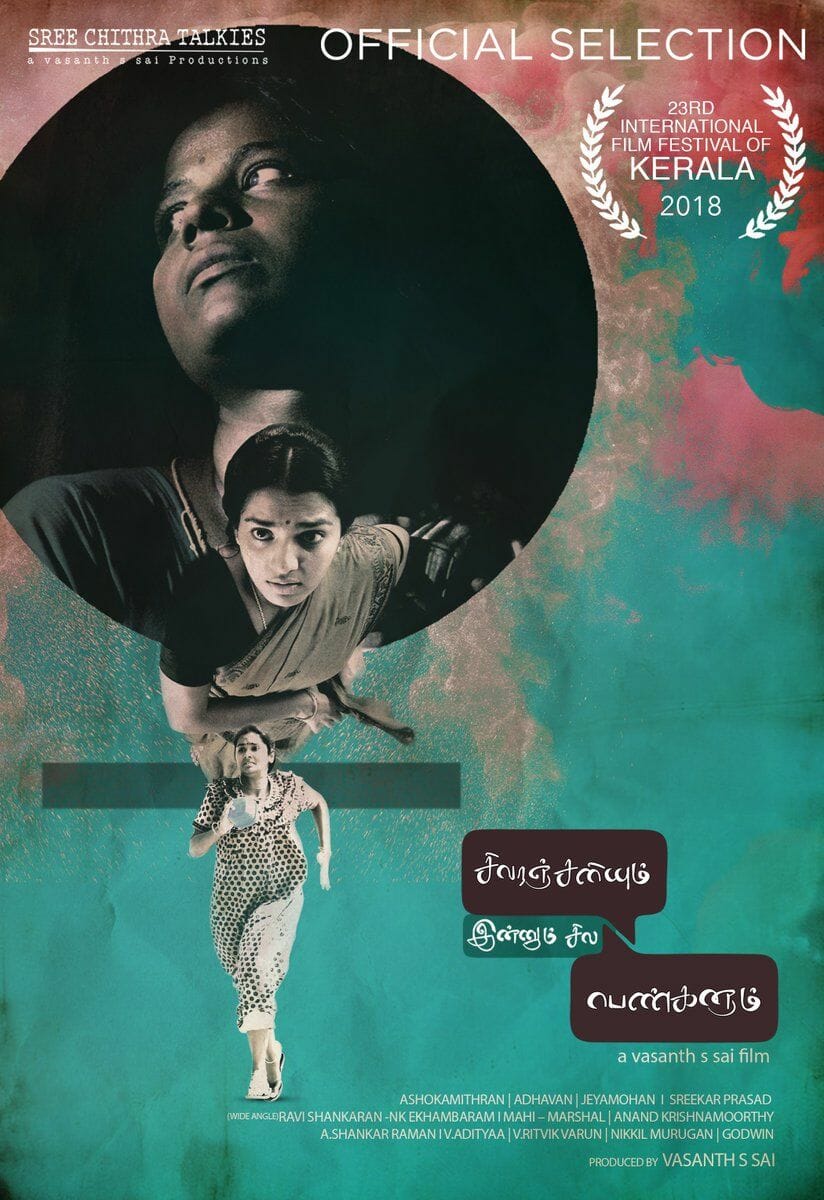 When the first short open, we see Chandran (Karunakaran) and Saraswati (Kalieswari Srinivasan) on their way back to home after attending a function. The camera rolls towards Saraswati giving us the picture of her carrying the baby on one hand and a couple of bags in another. Chandran without any concern about his partner struggling, walks as if he is in a walk race competition. Saraswati finds it hard to keep up. With all these barriers, she must board a bus. This very scene gives us a lucid picture of her relationship with her husband. She is not supposed to have a mind of her own and must function only according to his approval. When she tries to speak up, she will be silenced with his thrashing. When she stands up out of desperation without being able to bear no more, it crosses Chandran’s male ego.

Director Vasanth brings to life the 80’s lifestyle and shows how penetrated was the patriarchal culture back then. Actress Kalieswari Srinivasan is simply superb as Saraswati. It is refreshing to see Karunakaran in a character role and he does complete justice to his part.

The second short, revolves around Devaki (Parvathy Thiruvothu). She is an employee with the central government. She is married in to a joint family. Her husband Mani (Sunder Ramu) is the one on the top of the progressive scale in this anthology. He does not have any ego to sit behind his wife and take a ride. He takes his wife’s side in a little family issue. But things reach the patriarchal level when her family finds out that she has the habit of keeping a journal. They suspect that she might have written something about them in it and wants to read it. When she refuses, they want her to allow her husband to read it. Mani initially supports her. But when he is coerced by his family, he wants Devaki to just show them the dairy so that the issue will be solved.

In this short, director Vasanth captures the state of a woman in a joint family and how the entire family puts her in a corner. Through Devaki he seems to say even if she is an independent working woman, it is hard for her to escape the domestic stereotypes and have her freedom. Actress Parvathy Thiruvothu is a perfect choice for Devaki and she kills it without efforts. Actor Sunder Ramu is effective as always.

In the third short, we meet Sivaranjini (Lakshmi Priyaa Chandramouli) who is set on the line ready to take part in an athletic event. She wins it. While the stage is set for the nationals, marriage clamp her legs. She is married off to Hari (Karthick Krishna). She takes up the housewife position and we get to see the legs that paced through the tracks pace from room to room waking her husband, serving coffee to her mother in law, getting her kid ready to school, preparing breakfast and lunch in the kitchen, and picking up after her husband.

From the eyes of Sivaranjini film maker Vasanth shows us how difficult it is for a woman to go after what she wants even if she is good at doing it. Giving up all she has worked so hard for and what she gets in return? An onerous chore schedule to work on for the rest of her life. Actress Lakshmi Priyaa Chandramouli has delivered an affecting performance. She makes us feel the agony of Sivaranjini to our bones.

Director Vasanth helms Sivaranjiniyum Innum Sila Pengalum with a crystal clear thought to shed light on women’s lives. He cleverly structures his shorts on three different periods. So that he could show us the patriarchal societal system has not changed much. He captures the dryness in the lives of women who are forced or rather systemically taught not to have an independent thinking of their own, let alone the dreams. Even their financial independence cannot give them their much desired redemption.

On the technical front, music director Ilaiyaraaja adds value to the drama through his poignant background score. Cinematographers N. K. Ekambaram and Ravi Shankar have covered the shorts from all best angles possible. Their colleague editor A. Sreekar Prasad has complemented their work well with his sharp cuts.

On the whole, Sivaranjiniyum Innum Sila Pengalum does not just take out and place the struggles in being a woman on table, it does it rhythmically inspiring hope and make our time worthwhile.